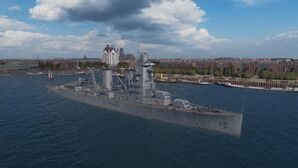 This cruiser was a development of the Java-class ships. She was larger in size, and her main battery guns were mounted in turrets.

Celebes is a Tier V cruiser of the Royal Netherlands Navy and is a peculiar ship at that. The main armaments of this vessel are four 150mm cannons in double turrets with two fore and two aft, she has no secondary guns to speak of and rather oddly no torpedoes continuing the tradition from the De Ruyter. Her only other armaments being its 8 x 1 40mm Bofors (which can be increased to 8 x 2) and its 2 x 2 25mm Bofors with most of the AA being located near the aft of the ship and having a maximum range of 3.5km.

The Celebes has the tightest turning radius of all current Tier V cruisers with 580 meters and has a better than average rudder shift time of 7.7 seconds, making her rather responsive to avoiding danger though it does take her a moment before she starts or stops her turns. She is however one of the slowest cruisers with a maximum speed of 30.6 Knots leaving her vulnerable to enemy cruisers and destroyers who can gain on her. Her armor is also relatively thin being 16mm above the waterline and prone to catching fire even from secondary armaments from cruisers if she gets close enough to them.

Her design is similar to her predecessor De Ruyter with more health and has a similar play style, being best used at range of roughly 11km to pepper the enemy with HE or in support of another friendly vessel at a closer range of up to 5km. Close range engagements within 3km or less are to be avoided due to the relatively thin armor and her guns inability to deal with threats quickly and in the case of enemy destroyers, their torpedoes can quickly send the Celebes back to port.

Both of her modifications should be researched, though they will not change the playstyle mentioned above as they provide a minor increase to her main guns range and health. You can also grab the modification for Main Battery 2 and the commander skill Grease the Gears to increase her traverse speed by 30%.

The recommended upgrades for Celebes are:

Celebes can equip the following:

Celebes was the third ship of the Java-class cruiser that was laid down in June 1917. She did not differ much from her sister ships except for a small increase in length and internal arrangements. Intended to be the flagship of the naval commander in the Dutch East Indies, the contract was cancelled with 30 tons of material already prepared. A new ship, HNLMS De Ruyter was later built to fill that place.

Ships of Netherlands
Cruisers
Retrieved from "http://wiki.wargaming.net/en/index.php?title=Ship:Celebes&oldid=314663"
Categories:
Your location:
To log in, select the region where your account is registered
CIS Europe North America Asia Republic of Korea
Or use Microsoft Login to enter WoT XBOX ecosystem
Log in