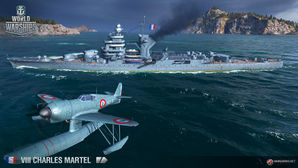 A heavy cruiser project (Project C5A3) designed to rival potential adversaries: new ships of this type that were being built in Germany. The main difference from the previous ships was manifested in the enhancement of the ship's main guns located in triple turrets.

As a Tier VIII cruiser with quick-turning 203mm turrets, fast shells, and good speed, Charles Martel performs much like a quicker-firing and slightly speedier Mogami (due to her access to the Engine Boost

The anti-air and turning capabilities are roughly analogous to Mogami, but Martel is slightly superior in both respects. Her shell penetration and HE fire chance are slightly worse, but Martel makes up for it in faster main battery rate of fire. Overall, Charles Martel is a strong ship at Tier VIII that can simply be described as a better Mogami.

Hull (B) should be researched ASAP for a significant health boost and faster rudder shift time. On top of this, Hull (B) is mandatory for researching the next tech tree ship Saint Louis. Then research the upgraded main batteries for slightly faster firing guns. The Fire Control System module is useful, but not necessary if the player wants to quickly move on to Saint Louis.

The following upgrades are recommended for Charles Martel:

As with other French cruisers, the most recommended signal flags are Victor Lima (

) can also be handy for getting around to places, as this increases Martel’s speed to a good 34.1 knots, which can then be increased another 20% by Engine Boost

The Charles Martel is based off the C5 A3 which was one of the preliminary designs for the unbuilt Saint-Louis-class of heavy cruiser. After the success of the Algérie and the appearance of the German Admiral Hipper-class, French designers, still subject to the tonnage restrictions set by the Washington Naval Treaty, began drawing up plans for a new class of cruiser based on the Algérie in order to replace the aging Duguay-Trouin class. Because of the tonnage restriction, French designers couldn't fit both a heavy secondary armament and aviation facilities,so they created two groups of designs: the "A" group carried aircraft while the "SA" (sans aircraft) traded aircraft for a heavier anti-aircraft and secondary armament. Neither design would be accepted as the Washington Naval Treaty would be abandoned after the outbreak of the Second World War, but the designs would be modified and merged to form the basis for the Saint-Louis class.

The naming conventions of the Marine Nationale are contradictory and annoying, therefore, Wargaming took one of the proposed names for the Saint-Louis class and gave it to the C5 A3.

Ships of France
Cruisers
Retrieved from "http://wiki.wargaming.net/en/index.php?title=Ship:Charles_Martel&oldid=318540"
Categories:
Your location:
To log in, select the region where your account is registered
CIS Europe North America Asia
Or use Microsoft Login to enter WoT XBOX ecosystem
Log in