A quick overview of clan battles.

Available to players of Access Level 17 and higher, Clan Battles offer captains the opportunity to team up with their clan mates and face off against teams from other clans in epic sea battles. Ascending to the Typhoon league and playing enough games there will reward players with a commemorative flag, and if they are able to repeat the feat across several seasons, they can earn unique reward ships!

Divisions for Clan Battles must be formed under the following restrictions:

Players without a Tier X ship that wish to participate in Clan Battles will have access to a limited pool of rental ships. Each group of available ships includes one destroyer, one cruiser, and one battleship; the available ships will rotate approximately every three weeks. 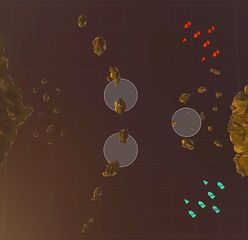 Each map appears in a domination point configuration unique to Clan Battles. These new capture point configurations still present a team with the challenge of splitting up or staying together; aggressive maneuvers should pay more dividends than a defensive stance, hopefully leading to battles that are more dynamic and more variable game tactics. More maps will be added into the rotation gradually in order to support a more dynamic play experience.

When creating a Clan Division, the class restrictions are clearly displayed.

Several teams from the same Сlan may be in the queue for battle at the same time. The results of every battle will be applied to a Сlan's Rating consequently after each of the ongoing battles involving the Сlan's teams is over.

The economy is tweaked to make sure all players within a team receive the same amount of resources. For a win, teams receive a lot more than in Random Battles, while a defeat brings a lot less.

(before all modifiers mounted on a player's ship are applied). By winning a Clan Battle with a ship carrying standard consumables — and given the average cost of ammunition at 20,000 credits — players receive 100,000

for losing a battle. With Premium account, players should receive around 250,000

for a lost battle.

(before all modifiers are applied). In a draw, both teams get the same amount of XP and credits as in a defeat.

, but may change depending on the modifiers applied.

If a battle lasts for less than four and a half minutes, players on both teams receive neither experience nor credits for that battle. This restriction has been introduced to avoid any unsportsmanlike conduct in battles. All teams that have this ratio applied during a battle for the first time will be kept under scrutiny and their battles will be subject to frequent reviews, just like battles involving all Clans with battle duration times close to that value. If a Clan is subject to an unsportsmanlike conduct penalty again, it will be banned from Clan Battles.

In Clan Battles, the same standard protection against AFK players is applied as in other battle modes. Players that fail to inflict damage to enemy ships and cover the minimum required travel distance will have their battle XP and credits reset to 0, though they will be charged for the ship servicing and ammunition costs.

The active skills of Legendary Commanders cannot activate during Clan Battles, however their passive skills do. For example, a Kleber with unique commander Philippe Auboyneau will not activate special talent Fire and Fury upon earning a 'Captured' ribbon. However, if it has the Survivability Expert skill, it will receive the enhanced version of the skill.

The specific maps, times, and rental ships for each season of clan battles is below.

Four maps were available for Season 1 of Clan Battles:

Rental ships available during Update 0.6.12 were:

Rental ships available during Update 0.6.13 were:

Rental ships available during Update 0.6.14 were:

Five maps were available for Season 2 of Clan Battles:

Rental ships available during Update 0.7.1 were:

Rental ships available during Update 0.7.2 were:

Rental ships available during Update 0.7.3 were:

Six maps were available for Season 3 of Clan Battles:

Seven maps were available for Season 4 of Clan Battles:

Seven maps were available for Season 5 of Clan Battles:

Rental ships available starting 3 May were:

Clan Battles Season 6 was the first on Tier VIII and with only six players per team. No rental ships were offered.

Six maps were available for Season 6 of Clan Battles:

Information on the website: Clan Battles: “Sea of Fortune” Season

Clan Battles Season 12 was the first on Tier IX with two battleships per team and possible ships restrictions. No rental ships were offered.

On Clan Battles Season 13, the capture time on all maps has been reduced from 40 to 30 seconds, and a cyclone can appear in any map. This season, rental ships will be offered.

Information on the website: Clan Battles: “Tears of the Desert” Season

Clan Battles Season 14 was the first on Tier VI with the option of two battleships per team or two aircraft carriers per team and possible ships restrictions. No rental ships were offered.

Clan Battles Season 15 see's the return of Tier X vessels, with two battleships allowed and no aircraft carriers allowed. This season has a feature of not allowing two identical vessels in a line-up. Rental ships are allowed.

Clan Battles Season 16 brings Tier X vessels, with the swap of 3 maps, when compared to the previous season. Aircraft carriers are still not allowed and the restriction of not allowing two identical vessels in a line-up is still ongoing. Rental ships are allowed, and they are: Hindenburg, Montana and Gearing.

Clan Battles Season 17 was played in a 7 vs. 7 format with Tier X ships and Superships.

Mode: Battles on all maps are fought in Domination mode.

Information on the website: Clan Battles: The Cayman Season

Clan Battles Season 18 will be played in a 6 vs. 6 format with Tier VIII ships.

Mode: Battles on all maps are fought in Domination mode.

Updated restrictions as of 21 September 2022 (including previous ones):

No rental ships are offered this season.

Victory leads to progression through the various leagues.

Clans that participate in Clan Battles will vie for ranking on a tiered leader board that spans five leagues. The leagues are:

Each League has three Groups, each Group requiring 100 points to ascend to the next. All points beyond that 100 roll over into the next Group/League. All Clans start in Squall League, Group II. A Clan gains or loses points in each Clan Battle depending on the outcome:

Once they've climbed through every group in the League, a Clan must fight through a series of five Progression Battles and win at least three of them. A victory sends the Clan to the next League with a 35-point bonus, while a defeat keeps the Clan in the same league with a 35-point loss. If a Clan doesn't fight the Progression Battles, they don't advance!

Alternatively, if a Clan loses enough points to fall to the bottom of their current League, they must win three out of five Relegation Battles to keep from getting kicked down to the league below with a 35-point penalty. However, they get a 35-point bonus if they succeed. Once a Clan hits zero points in Squall League, Group III, they've hit rock bottom and won't lose any additional points.

Rewards for Clan Battle participation consisted of a series of missions that awarded a mixture of credits, doubloons, flags, and Free XP for winning a certain number of battles in each league.

Initially, after winning 30 battles in Typhoon League, players were awarded a Stalingrad Flag that could be exchanged — with two additional flags — for Tier X premium Soviet cruiser Stalingrad. This was changed shortly before Season 3 to the steel system, via the Armory.

Currently, the primary reward of Clan Battles is in the form of steel(

) that can be spent in the Armory on special reward ships that are not available via any other means, such as Plymouth, Shikishima, Bourgogne, or Stalingrad.

Retrieved from "http://wiki.wargaming.net/en/index.php?title=Ship:Clan_Battles&oldid=322636"
Category:
Your location:
To log in, select the region where your account is registered
CIS Europe North America Asia
Or use Microsoft Login to enter WoT XBOX ecosystem
Log in