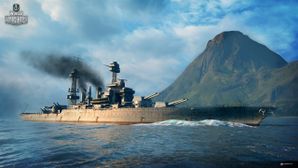 She became the final phase in development of conventional battleships that featured very heavy armor protection for the vitally important parts of a ship. Key differences from her predecessors were her 406mm main guns and a novel torpedo protection system. In speed, she was outclassed by other battleships of her time.

The very pinnacle of the American dreadnought and one of the Big Seven, Colorado is the last ship of this type you will experience within the US battleship line. While retaining the sluggish nature of the previous ships in the line, she has increased range and hitting power thanks to her 16in guns, as well as strong anti-aircraft armament.

A massive departure of the other American super dreadnoughts New York, New Mexico, and Arizona, Colorado, behaves more like a close-in brawler, slowly closing the gap with other battleships, under the protection of her thick armor and sound torpedo bulge. However, her atrocious acceleration, low speed, and relatively low hit points require exceptional situational awareness, careful positioning, good damage control management, and constant movement (she should never slow to a full-stop). Furthermore, without a range modification installed, she must focus on closing distances with enemy cruisers and battleships to 14km or less, where her excellent guns are most effective at smashing them to bits.

Recently, her WWI-era hull was removed, greatly aiding in the leveling-grind and boosting her range to the point where installing the Artillery Plotting Room upgrade will depend on one's play-style. Fitting her with the latter will boost her range to rival her contemporary, Nagato, but doing so will exclude maximizing either her secondary weapon or AA focused-build options. Colorado also received a buff to her hit points, putting her on par with her contemporaries at tier 7.

Colorado is very slow. Therefore, researching the Engine upgrade is highly recommended. Afterwards, one should research Colorado (B) before the Gun Control Fire System upgrade, as any range increase provided by the latter is offset by the ship's lack of main gun accuracy at longer ranges. Additionally, Colorado (B) greatly increases ship stamina and AA defense, two assets Colorado must rely upon to compensate for other deficiencies. Researching the B hull unlocks progression to North Carolina.

Beginning from Update 0.9.11, the US battleship line splits into fast (North Carolina/Iowa/Montana) and slow (Kansas/Minnesota/Vermont) lines, with Colorado as the split point. USS Kansas and the ships which follow her are an extension of the Colorado's design philosophy, trading speed for armament, and Kansas is researched directly from the Colorado's main gun module. These are more difficult ships to play than North Carolina/Iowa/Montana, and inexperienced players might best be advised to unlock North Carolina first then spend further time in Colorado to ascertain whether the "slow line" design philosophy truly suits them before progressing to Kansas.

Despite her shortcomings, Colorado is a surprisingly modular ship which can be tailored to focus on main guns, secondaries, or AA.

Slot 1 is most commonly filled with Main Armaments Modification 1

is a popular pick for captains who go for a full AA build with other upgrades and commander skills.

. This will reduce chances of fire and flood.

will boost the outer AA envelope, while Secondary Battery Modification 1

will boost the range and accuracy of secondaries instead. Artillery Plotting Room Modification 1

will increase range and give secondaries a slight boost in range and accuracy, but may be a weaker choice than the other two.

, reducing the amount of time on fire and conserving hit points.

Colorado is equipped with the following consumables: Damage Control Party

, and a choice between Spotting Aircraft

over the Catapult Fighter

will often give more benefit.

The Colorado-class battleships were a group of four battleships built by the United States Navy after World War I. However, only three of the ships were completed: Colorado, Maryland, and West Virginia. The fourth, Washington, was over 75% completed when she was canceled under the terms of the Washington Naval Treaty in 1922. As such, the Colorado-class ships were the last and most powerful battleships built by the US Navy until the North Carolina class entered service on the eve of World War II.

The Colorados were the final group of "standard" type battleships, designed to have similar speed and handling to simplify maneuvers with the line of battle. (The South Dakota class which was to follow would in several ways have been a departure from this practice.) Apart from an upgrade in striking power to eight 16-inch guns, the ships were essentially repeats of the earlier Tennessee class. The Colorados were also the last American capital ships built with four turrets and twin-mounted guns. The change to larger guns was prompted by the Japanese Nagato-class battleships, which also mounted eight 16-inch guns.

All three ships had extensive careers during World War II. Maryland and West Virginia were both present during the attack on Pearl Harbor on 7 December 1941, Colorado was at Puget Sound Naval Shipyard receiving an overhaul. Maryland escaped relatively unscathed; West Virginia was sunk in the shallow waters of the harbor but subsequently raised and repaired. All three ships served as artillery support ships during amphibious operations. Maryland and West Virginia were present at the last surface action between battleships, the Battle of Surigao Strait during the Battle of Leyte Gulf in October 1944. The three ships, put into the reserve fleet after the end of the war, were scrapped by the late 1950s.

Ships of U.S.A.
Battleships
Retrieved from "http://wiki.wargaming.net/en/index.php?title=Ship:Colorado&oldid=323473"
Categories:
Your location:
To log in, select the region where your account is registered
CIS Europe North America Asia
Or use Microsoft Login to enter WoT XBOX ecosystem
Log in