Upon reaching Access Level 9, a player is granted the ability to assign a Commander to each ship. Commanders can learn a variety of useful skills that enhance the performance of the ship. Sometimes these are straight buffs to the vital statistics of a ship — such as faster turret traverse speed or more hit points — while others confer entirely new abilities or tools for the player to use in combat. A highly skilled commander is among the most powerful upgrades a ship can obtain in World of Warships, working together with installed upgrades, chosen consumables, and equipped signals to enhance the performance and capabilities of the ship.

A commander is the personification of a ship's crew. Some crews are well-trained and trained in the specific features of the ship, and some are not so well trained. Training a crew is a long process that requires much repetition and a defined curriculum. The training level is represented by Skill Points, and the specializations by acquired Skills. Commander XP (CXP), earned in battle, is used to acquire skill points. See the Economy article.

Assigning a Commander to a ship

To assign a different commander, in Port click on the Commander portrait in the Ship Specs panel. The Commander Skills screen will appear. (see below) Click the Change Commander button.

If there is no commander assigned to the ship, in Port there will be one or two buttons instead.

This is the screen displayed by clicking on a commander portrait in Port. From here, all functions (except Recall and Assign when there is no commander — the buttons above) can be done.

[Also show the bottom? of a page with pending skill selections.]

Below the portrait, name, and rank, the bar gauge shows the CXP progress toward the next skill point, or to completing retraining. The little green button

brings up the Accelerate Training dialog.

Below the two columns of commanders on the Assign Commanders screen there is a Recruit button that brings up the interestingly named Commander Training dialog.[3]

A new commander can be recruited with or without skill points.

Clicking the buttons below the commander's portrait in the recruitment window generates a new name or portrait for the commander. This can be repeated until the player is satisfied with the combination.


When a ship is purchased from the tech tree, it can be with a newly recruited commander or without one. The latter option is useful when you intend to assign a commander from Reserve or from another ship.

A commander can be dismissed at any time (when he is not in battle).[4] This will free up a reserve slot if he was in the reserve.

Commander XP can be recovered from a dismissed commander in the form of Elite Commander XP (ECXP):

The amount available for recovery is the total amount acquired by the commander over his career. For example, a 10 point commander with 500 CXP has 183,500 CXP available to recover as ECXP.

A commander dismissed without recovering his CXP can be recalled within 60 minutes (assuming a reserve slot is available). After that the dismissal is permanent. The dismissal of a commander that recovers CXP is immediate and permanent.

The Assign Commander screen shows all your commanders of the ship's nation and offers three functions: assign a commander from Reserve, assign one that is currently on another ship, or recruit a new commander, all replacing the currently assigned commander (if any) and sending him to reserve.

The left list shows the commanders in reserve and those awaiting dismissal, the right list shows those assigned to ships.
The sorting criteria for both lists are:

Commanders who would need retraining are marked with two orange arrows forming a circle. 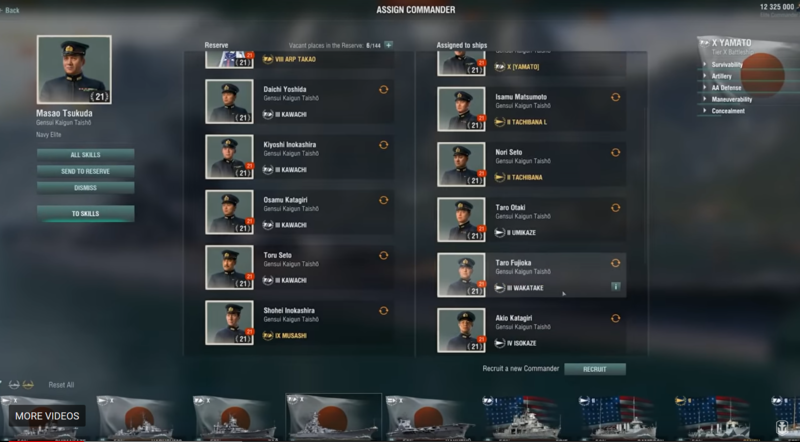 Reserve slots hold unassigned commanders. Commanders held in reserve can be assigned to any ship of the same nation, subject to re-training costs. When reserve is full, actions that put a commander into reserve without taking one out are not available.[5]

Each player starts with four (4) reserve slots. Additional reserve slots can be purchased with doubloons — normally four (4) slots for 100

. The number of total and unoccupied reserve slots (for all nations) is shown above the Reserve (left) column of the Assign Commander page, with a button to purchase more.

Once trained to a non-premium ship from the tech-tree, a commander's skills can be used only on that tech-tree ship. (They can be used on premium ships. See below.) Moving to a new tech tree ship[6] requires the commander to retrain to that ship, which is usually accomplished by earning a certain amount of Commander XP in his new ship (see the table to the right). Normal commander training resumes once retraining has been accomplished.

Remember that while a Commander is re-training, skill effects are disabled.

When re-training is required, a commander is offered three options. He can spend:

CXP and ECXP cannot be combined to complete retraining.

When a non-elite commander is re-training, CXP is earned but the 5% as

is not earned.
Elite commanders earn experience as normal but it goes against the retraining cost rather than into the EXCP pool.

Retraining a commander costs much less CXP than recruiting a level 0 commander and training him to the same level.

Because commanders have a separate set of skills for each ship type — battleship, cruiser, destroyer, aircraft carrier — they can reasonably be moved to any premium/special ship. A commander with unused skill points can select skills while assigned to a premium/special ship of that type. See below.

Note that while a new commander can be recruited to a premium/special ship, an existing commander can never be re-trained to one.

This section discusses earning Commander Experience (Commander XP or CXP) and the Skill Points that are acquired with it.

The table at right shows the experience requirements for a commander to get skill points.

in the same way that ships do, starting with Base XP, to which CXP bonuses from 'For Personal Merit' global boosters, permanent ship booster packages, expendable bonuses, and 'For Clan Merit' global boosters are added. See the The Economics of Battle article for details. Players can view how much commander XP they earned in a given match on the 'Credits and XP' tab of the post-battle report.

In addition to CXP, ECXP

may also earned in the battle. (Except see the warning above under Re-training.) Non-elite commanders earn 5% of CXP. Since elite commanders CXP earnings all go to the ECXP pool; no extra is earned.

Skill points can be purchased directly with

Elite Commander XP (and with

Each commander displays his skill points overlaid on his portrait in Port as available/total. Thus a commander with 15 points, only 3 assigned, would show "12/15" on the lower right of his portrait.

Clicking on the commander's portrait brings up the Assign Commander screen where the display of available point is a little red icon at several points on this and subsequent screens.

(ECXP) is to Commander XP as Free XP

is to ship XP. A quantity of Commander XP is associated to a particular commander. ECXP

accumulates in a common pool where it is available to all commanders on a player account.

The current ECXP balance is shown in the upper right corner of each of the commander screens.

In battle, ECXP equal to 5% of all Commander XP earned is contributed to the common pool.

A commander with 7 Skill Points and 100 CXP is assigned to a non-premium ship for which he is not trained. 5000 XP is required to fully re-train him.

The ultimate purpose of earning Commander XP and Skill Points is to acquire Skills. Skills provide bonuses to ship performance (but in some cases also penalties). Each skill has a mastering cost (level, skill point cost) from 1 (first row) to 4 (fourth row). Every commander can acquire five sets of skills, one for each ship type — battleship, cruiser, destroyer, aircraft carrier, and submarine. A commander's skill points can be spent on all five sets. For instance, a commander with 10 points can acquire 10 points worth of battleship skills and also 10 points worth of carrier skills, etc. The skills for each ship type are different. There are 24 skills per ship type (only 20 for submarines). Some skill effects are active only under certain conditions.

Some skills are only useful to ships with certain weapon systems. Skills that are not useful to the current ship are marked as such. They may still be selected. (If a skill is not useful on the current ship, it may become so when the commander is moved to a different ship.) However, considering the cost to train a highly skilled Commander, it is best to focus his skills on ones that are immediately useful. A complete list of skills, their point costs and effects, appear in the main article.

When selecting skills, a number of different skills can be selected and the effect on the Ship Specifications (panel to the right) observed. Once a set of acceptable skills is selected, you are asked to confirm their application. A set of skills is expensive to redistribute, so select carefully.

A skill in row 2-4 can only be mastered if a skill of the row above (of the same ship type) has been mastered. The symbol of a mastered skill is yellow. Skills with a yellow triangle in the lower right corner are recommended for the current ship.

10,000 per spent skill point; players are not charged to redistribute unspent skill points. Upon confirming the redistribution, all currently trained Commander skills in the current set are cleared, the corresponding skill points are refunded, and players may begin assigning those skill points again as they see fit. Skill selections in the other three skill sets are not affected.

Note that if a commander has at most 7 skill points and they are all spent for a ship type, recruiting a level 0 commander and training him to the same commander level costs less XP than redistributing the skill points for that ship type.

As Commanders gain levels, they are given rank titles based on their nation. These roughly correspond to the historical ranks awarded to officers of their nation's respective navies. The table below lists these ranks as they appear in game.

Retrieved from "http://wiki.wargaming.net/en/index.php?title=Ship:Commander&oldid=323872"
Categories:
Your location:
To log in, select the region where your account is registered
CIS Europe North America Asia
Or use Microsoft Login to enter WoT XBOX ecosystem
Log in