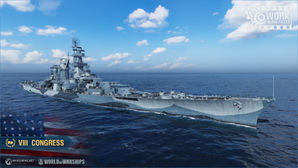 American promo premium Tier VIII cruiser.
A variant of the "large cruiser" project with seven 305 mm guns as her main battery. She was similar to the Alaska-class ships in terms of her other characteristics.

USS Congress is an American Tier VIII large cruiser design. Her design is based off the Tier IX premium ship USS Alaska. Like the other large cruisers in game, Congress features large caliber guns, good armor (for a cruiser), and the sixty second fire duration. Captains would not technically be wrong if they said that Congress is a down-tiered clone of Alaska but this does not paint a complete picture. While she sports the same modules as her Tier IX counterpart, including radar, there are enough differences to distinguish the ships from each other.

The hull and armor of Congress and Alaska are identical, except that Congress has fewer hit points at 51,150 compared to 60,800. Much like many of the high tier American cruisers she has 27mms of armor on her bow and stern; as well as strong deck armor. Congress benefits from having a water line citadel which helps her avoid being citadeled at close ranges. While her armor is overall decent, captains need to be mindful that she is still a cruiser.

Congress is armed with seven 305mm guns with five mounted forward and two aft. These are the same 305mm/50 mk.8 rifles found on her higher tier sister but there are several differences that will impact performance. Congress has a firing range of 17.5km compared to Alaska’s 18.97. This can be offset by using the spotter plane consumable but captains do so at the risk of reducing her air defenses. Furthermore, Tier VIII Congress does not have the option of mounting the Main Battery Mod 3 to improve reload. Thus her reload is at best 22 seconds vs. Alaska’s 17.6 seconds. Combine this with Congress having two fewer rifles means that her damage output just does not keep up with her higher tier sister. That said, these 305mm rifles do still pack a punch when they find their mark on an enemy ship.

One would expect that such a large ship would have amazing air defense but, sadly she is just middle of the pack for USN Cruisers. Sporting the standard 5 inch rifles of the USN gives her a decent range of 5.8kms but the majority of her AA damage comes from her dual mounted 40mm’s and her single mounted 20mm’s. The main drawback here is that the engagement range for these guns is 3.5km at best and aircraft do not spend much time in this range. This translates into very little engagement time and can see planes get through as a result. As part of a group is where her AA shines like most USN cruisers but alone her AA is just average.

While she can readily contribute a decent amount of damage to enemy aircraft as a group, alone she will find herself vulnerable to a determined carrier captain.

Her maneuverability is as expected. Congress is a large ship with a fairly long rudder shift time of 13 seconds. Considering her top speed of 33 knots before speed flags her turning radius of 850m is surprisingly good for her size but still not great. Further, she is the most detectable cruiser at her tier. Captains should stay at range to allow her rudder the maximum time to work so that she can reduce damage by dodging shells.

Much of Congress’s play style is based on choosing fights wisely. Although she has great armor for a cruiser and solid guns, she still can be out-damaged by equal and higher tier cruisers due to her slower rate of fire. Her armor will not stand against high-tier battleships; captains should avoid thinking that her large guns and good armor can allow her to carry such an engagement. Captains should spend the early game working with their teammates like normal but, a healthy Congress really begins to show its teeth towards the end game. Captains can use her radar early game to aid in removing destroyers and other cruisers. Furthermore, being able to preserve her health via a heal is a major boon and will help her win one on one fights later in the match. Learning when Congress can safely engage targets in duels and win is an important skill for captains looking to maximize her game play.

As a premium ship, Congress has no module upgrades to research.

The recommended upgrades for Congress are:

Congress can equip the following:

As a premium ship, Congress comes with Default permanent camouflage and a set of permanent combat bonuses.

Ships of U.S.A.
Cruisers
Retrieved from "http://wiki.wargaming.net/en/index.php?title=Ship:Congress&oldid=319439"
Categories:
Your location:
To log in, select the region where your account is registered
CIS Europe North America Asia
Or use Microsoft Login to enter WoT XBOX ecosystem
Log in