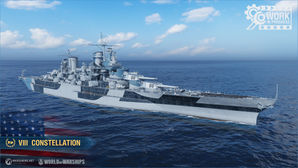 A battlecruiser of the Lexington class built under the Naval Act of 1916 after the end of WWI.
One of the largest and fastest warships of her time.

Constellation was first released for sale on 02 July 2021.

At the turn of the century, capital ships were slow due to the enormous mass of guns and armor that they carried and the wide hull forms required to keep that mass afloat. Even as power plant efficiency improved, navies were considering the 'battlecruiser' — a capital ship with battleship armament that traded some armor mass for sleekness and speed.[1] The high speed would give them more tactical options, including the ability to control engagements, while maintaining hitting power.

The U.S. Navy set out to build only one class of battlecruiser: the Lexington class. Six class ships were laid down. Four (including Constellation herself) were cancelled and scrapped on the ways in 1922 due to the Washington Naval Treaty, while two – Lexington and Saratoga – were converted to aircraft carriers that served with distinction in WWII. In World of Warships, Constellation has been completed and later modernized — a true battlecruiser.

As a Lexington-class battlecruiser, Constellation sacrifices armor for speed. She is the second fastest Tier VIII battleship (without factoring in speed boost) at 33.3 knots, falling just behind Champagne at 34 knots. Her armor is light, with a 27mm bow and stern compared to the 32mm plating of the other US Tier VIII battleships. 27mm armor is overmatched by 406mm and larger shells, meaning that most battleships at Tier VIII and above can overmatch her bow and stern. Nonetheless, her casemate and deck armor is impressive at 57mm which gives her the ability to shatter high caliber 305mm HE shells as well as Italian 203mm SAP shells. Her armor belt is also the lightest of the Tier VIII US BBs at 178mm, far below the 305mm of North Carolina, the next lightest armored, making Constellation more easily penetrated by lightly armed ships such as heavy cruisers.

Constellation's main battery consists of eight (8) 406mm rifles[2] in dual turrets arranged in a ABXY format. They have the same characteristics as Colorado, reloading in 30 seconds with an alpha strike of 99,200. However, Constellation's battery has an improved dispersion formula that makes her one of the most accurate Tier VIII battleships. Sigma is a healthy 1.90σ.[3]

The ship's main battery has an odd quirk. There are superstructure and deck projections that interfere with the laying of her aft guns at low elevations, i.e. close ranges. Over about 10km they clear giving decent gun angles. Closer and the angle is limited to about 45°. Thus at close ranges, she must show considerable broadside to get all guns on target. (Note that while this affects bow-in orientations, it does not affect kiting.)

The secondary battery is standard for USN battleships with ten dual purpose mounts housing twenty (20) 5"/38 Mk.12s. With the Artillery Plotting Room Mod 1 upgrade and the Mike Yankee Soxisix signal, their range is 7.3km. Adding the Long-Range Secondary and CQC skills takes the range out to 8.7km with a 5.1 second reload.

Constellation the first USN battleship to be armed with torpedoes. She carries six (6) torpedoes arranged in triple tubes on either side of the ship's stern. They are the same torpedoes carried on Tier VIII destroyer Kidd with a range of 9.2km, base speed of 55 knots, and maximum damage of 16,633.

To set her apart even farther, she is one of the few battleships to sport radar. Further, she can mount both aircraft and radar consumables. The ability to mount both spotting aircraft and radar aids in play both at range and up close. The range of the radar is 10km, with an action time of 30 seconds, and a reload time of 120 seconds.

Commanders of Constellation will find that playing on a flank and at medium to long ranges will be more successful, using her fast speed to set up cross fires or catch ships broadside. While having the same amount of health as Alabama at 63,300, Constellation is not as heavily armored and will lose more health from lighter armaments. To counter this, she should use her speed and 15.3 second base rudder shift to attempt to dodge incoming fire. While being equipped with radar and torpedoes, it is best to keep Constellation at range due to the poor turret angles up close. The radar and torpedoes should be used defensively or if the captain is pushing a flank with support of other ships, setting up ambushes, and in retreating maneuvers. If she does end up within 10km of an enemy ship, and provided the enemy ship is sailing towards her, the captain should use the torpedoes before the aft turrets to minimize the amount of side being shown for as long as possible.

As a premium ship, Constellation has no module upgrades to research.

There is no single optimum build for Constellation. Her guns can be optimized for close or long-range engagement, her utility consumables can be buffed, there is the ubiquitous survivability or 'tank' build, and secondary and AA builds are both reasonable.

The recommended basic upgrades are:

As with build themes, a wide variety of skills combination can be justified on this ship.

As a premium ship, Constellation comes with Default permanent camouflage and a set of permanent combat bonuses.

Ships of U.S.A.
Battleships
Retrieved from "http://wiki.wargaming.net/en/index.php?title=Ship:Constellation&oldid=319092"
Categories:
Your location:
To log in, select the region where your account is registered
CIS Europe North America Asia
Or use Microsoft Login to enter WoT XBOX ecosystem
Log in