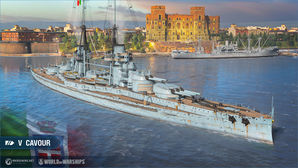 A representative of the first series of Italian dreadnoughts. As with many large ships of the Italian Navy at the beginning of 20th century, she had an almost symmetrical silhouette. The battleship's main armament comprised thirteen 305 mm guns.

The recommended upgrades for Conte di Cavour are as follows:

Ships of Italy
Battleships
Retrieved from "http://wiki.wargaming.net/en/index.php?title=Ship:Conte_di_Cavour&oldid=323406"
Categories:
Your location:
To log in, select the region where your account is registered
CIS Europe North America Asia
Or use Microsoft Login to enter WoT XBOX ecosystem
Log in