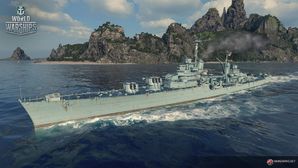 A version of a small light cruiser design, the development of which preceded the creation of Helena-class cruisers. She had the features characteristic of most subsequent ships of this U.S. Navy type: moderate speed, the absence of torpedo armament, and the availability of dual-purpose guns complementing the 152 mm main battery mounted in the turrets.

As the first modern light cruiser design in the American tech tree, Dallas differs significantly from her predecessor, Omaha. While she retains the light armor, Dallas mounts a more efficient turret layout, and numerous consumables.

For her main armament, Dallas boasts an impressive set of ten 152mm guns in four turrets. These guns have a quick rate of fire, decent shell damage, and a high fire chance. When combined with the Inertia Fuse for HE Shells commander skill, Dallas has no trouble effectively damaging larger, more armored targets. The ship's armor piercing shells are also very effective against broadside targets, or other lightly armored ships. Like other light cruisers, Dallas' shells have a longer travel time than some captains may be accustomed to. This is due to the higher shell arcs. While this may require captains to adjust their aim to account for the shell travel time, this allows allows Dallas to fire at enemy targets from behind island cover.

Similar to other light cruisers, Dallas is lightly armored with an exposed citadel. The ship will not last long under fire from enemy battleships or heavy cruisers. Instead of relying solely on armor for protection, captains should be mindful of their map position and concealment. When necessary, Dallas can make use of her wide firing angles to minimize her profile without losing firepower.

Like later ships in the American light cruiser line, Dallas is fitted with a wide selection of consumables. She can mount Defensive AA Fire

simultaneously. When combined with her powerful main battery, the ship's consumable set allows captains to make quick work of enemy aircraft, destroyers, and other smaller targets. With proper map positioning, Dallas can easily perform well as a versatile support cruiser.

Availability of researchable upgrades for Dallas is as follows:

The recommended upgrades for Dallas are as follows:

Key skills for Dallas commanders include Priority Target, Demolition Expert, and Inertia Fuse for HE Shells. Concealment Expert is also recommended to reduce the ship's detection range. Basic Firing Training and Manual Fire Control for AA Armament can be taken to improve the ship's anti-aircraft abilities.

Ships of U.S.A.
Cruisers
Retrieved from "http://wiki.wargaming.net/en/index.php?title=Ship:Dallas&oldid=317690"
Categories:
Your location:
To log in, select the region where your account is registered
CIS Europe North America Asia
Or use Microsoft Login to enter WoT XBOX ecosystem
Log in