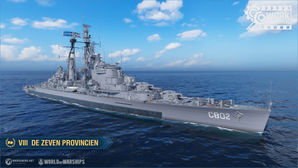 A light cruiser laid down before the outbreak of World War II. The ship was completed in the 1950s utilizing a changed design. Carried powerful AA defenses centered on the use of 152 mm dual-purpose guns.

As a premium ship, De Zeven Provinciën has no module upgrades to research.

The recommended upgrades for De Zeven Provinciën are as follows:

As a premium ship, De Zeven Provinciën comes with Default permanent camouflage and a set of permanent combat bonuses.

De Zeven Provinciën-class started as the Kijkduin-Class, which was meant to replace the aging Java-Class cruisers. Talks started in 1936. The design was made by the same Engineer as De Ruyter, Ir. G. 't Hooft. At first, the design incorporated only eight guns in twin mounts, but in mid to late 1937 the underfiring turrets were replaced with triples. Around 1939 she was renamed too Eendracht. In 1947 her name was changed to De Ruyter and in 1950 the names of her and her sistership De Zeven Provinciën were swapped.

In 1946 the Eendracht was redesigned in Bath to incorporate lessons learned during the war. BL MK. XXIII was considered but the hull was not designed to incorporate the heavier turrets. A layout of four Bofors twin turrets was eventually agreed upon. The AA would have consisted of 40mm Bofors guns in STAAG mounts. These were eventually replaced with modern radar-controlled single mounts and 57mm twin mounts. The lighter armaments of 12,7mm were to be increased to 20mms but were eventually dropped entirely to redistribute funds. Furthermore, a new electronics suite was added as well as a 10,3cm Bofors Light-Rocket Launcher. These new additions caused her crew requirements to increase into the 900s. She was later refitted to incorporate a Terrier-type missile launcher, replacing her aft turrets.

She was laid down before the war and captured by the Germans whilst in progress. But she was never completed nor launched during the war. After the war, the ships were to be completed following a new design and she was commissioned in 1953 as De Zeven Provinciën. In 1962 - 1964 she was rearmed with a Terrier system in place of her aft turrets. In 1975 she was decommissioned and sold to Peru.

Ships of Netherlands
Cruisers
Retrieved from "http://wiki.wargaming.net/en/index.php?title=Ship:De_Zeven_Provinciën&oldid=319601"
Categories:
Your location:
To log in, select the region where your account is registered
CIS Europe North America Asia
Or use Microsoft Login to enter WoT XBOX ecosystem
Log in