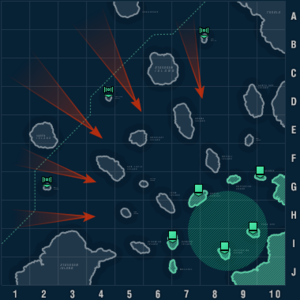 Defense of Naval Station Newport is a PVE Scenario which has the friendly task force defending a base against enemy attack waves. Players are tasked with preventing the destruction of essential onshore installations and support ships. Players may take any Tier VI ship. The allied force consists of 7 human players and bots.

Players will spawn in the south-eastern corner of the map within Naval Station Newport's perimeter, designated by a green circle on the mini-map. Initial friendly forces consist of the seven player ships, three outer gun batteries, two (damaged) inner gun batteries, three surveillance stations, two Liberty maintainer ships, one St. Clair communications ship, and three generic base structures. Near the start of the battle, the two Liberty ships will move out to repair the two innermost gun batteries, and damaged ships can move within the green aura around them at any time to slowly recover their health. 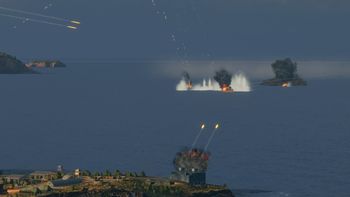 When the battle begins, the first enemy ships of the preliminary waves will spawn and begin to sail towards the base. The first wave may spawn around any one of the three surveillance stations but the second and third waves can only spawn at a station adjacent to the previous one, which may be helpful to a defender for positioning for each attack. If any of these ships breach the main defense perimeter or are not sunk before 10:00, the corresponding secondary task will be failed and the main attack will begin immediately. It is impossible to obtain 5 stars for the Operation if this occurs.

If the base is successfully defended before 10:00, Romeo, a Baltimore-class cruiser, will then spawn at either the south or east edge of the map and begin to flee towards the base, quickly being following by an enemy Aoba and Nurnberg. Ensuring Romeo's survival is another secondary objective, and if the pursuing cruisers can be dealt with, the carrier will remain around to offer its own strike aircraft in the defense of the base. The main attack will often spawn not long after Romeo does, however, which can complicate rescue efforts, especially if players are not in a position to readily defend her.

The contents of the main attack wave differ slightly depending on whether all previous secondary objectives were achieved. If all enemies are sunk before breaching the base, the main attack will contain an Izumo-class battleship (Kousotsu) in Hull (A). Otherwise, the main attack will contain the Aoba, Nurnberg and Izumo-class battleship (Gunkan) in Hull (C) that would have spawned in pursuit of Romeo. Sinking the Izumo (Gunkan) is considered an additional secondary objective. It is worth noting that all the attacking ships are either German or Japanese, so wise captains should choose ships from nations that are better against them.

For CVs, it is important not to use too many of the torpedo bombers and dive bombers at the start of the game and use the attack aircraft instead. If too many bombers are lost at the start of the game, this will make the carrier less effective when the main attack starts. All T6 carrier rockets will not be able to penetrate the deck of the battleships. In fact, the Izumo's deck armour will shatter all bombs dropped on it, leaving the only weapon effective against it the torpedo bombers. Good plane management is required to be able to have any sort of impact in the late-game. Although the torpedo or dive bombers will in all probability need to be used to prevent the 2nd and 3rd wave from breaching the perimeter in time, some planes are highly likely to be shot down before dropping their payload. Pre-drops can be used to prevent you from losing full squadrons. This holds especially true for the IJN carrier Ryujo which has many planes but few plane hitpoints.

Regardless of whether the main defense perimeter is breached, a straggler wave may appear tailing behind the main attack. Once all remaining enemy ships have been sunk, the mission will be completed.

In the operation, there are numerous enemies that may be encountered. There are separate waves of enemies which are comprised of different enemy ships:

Firepower is paramount in this operation. It is recommended to use a carrier and four cruisers. The most preferred choices are Ryujo and Dallas, but most Tier VI ships will perform well. For the remaining slots, a single destroyer may be useful for spotting, but otherwise, battleships tend to be more effective.

Retrieved from "http://wiki.wargaming.net/en/index.php?title=Ship:Defense_of_Naval_Station_Newport&oldid=313096"
Category:
Your location:
To log in, select the region where your account is registered
CIS Europe North America Asia Republic of Korea
Or use Microsoft Login to enter WoT XBOX ecosystem
Log in