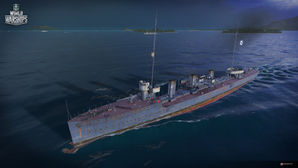 The ship belonged to the first series of Russian destroyers to be equipped with turbines. Derzki boasted good survivability owing to a high speed combined with dimensions that were comparatively large for her time. Until the very end of World War I, she had been unrivaled in terms of the number of torpedoes that could be launched in a broadside salvo.

Derzki may feel like a downgrade from Tier II's Storozhevoi. She does have more health, but the ship is bigger and easier to detect and hit, is a bit less maneuverable, and the gun range is slightly reduced. She is, however, still relatively fast, and has the largest torpedo broadside of all Tier III destroyers with 10 torpedoes.

Captains should use her speed to charge enemy battleships, where the sheer mass of torpedoes, combined with the point blank range and sluggish maneuverability of the battleships the Derzki will be matched against guarantee at least few hits and, more often than not, a kill and a "Devastating Strike" medal. However, blindly charging at the closest battleship in range will guarantee a quick trip back to port; captains should seek out a battleship with little to no cruiser cover, activate the Engine Boost

consumable, charge in, launch their torpedoes, deploy smoke, then disengage. If any cruiser or destroyer attempts to pursue you through your smoke, unleash another torpedo broadside once they get close to make them regret continuing pursuit.

The recommended upgrades for Derzki are as follows:

Derzki can equip the following consumables:

Ships of U.S.S.R.
Destroyers
Retrieved from "http://wiki.wargaming.net/en/index.php?title=Ship:Derzki&oldid=319715"
Categories:
Your location:
To log in, select the region where your account is registered
CIS Europe North America Asia
Or use Microsoft Login to enter WoT XBOX ecosystem
Log in