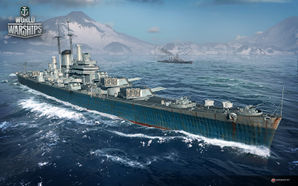 One of the best heavy cruisers in the world. The ship was designed using the experience gained in World War II, resulting in excellent protection and very powerful AA armament. The key distinctive feature of cruisers of this type was auto-loading main guns that had a very high rate of fire.

Only a handful of high tier cruisers are known to have absurd firing rates: Smolensk, Neptune, Minotaur, Plymouth, Seattle, Worcester, Austin, Salem, Colbert, and this heavy cruiser. It is no surprise that due to her being the last all-gun cruiser made, she has all the lessons learned from her cruiser predecessors in the Second World War incorporated in her design. A very noticeable trait on Des Moines is her absurd rate of fire for a heavy cruiser, with each turret reloading at 5.5 seconds, making her extremely deadly to destroyers within radar range and other cruisers. She also can whittle down battleships quickly and, with her impressive AA suite, wipe out carrier strike squadrons with ease. However, she is extremely fragile: her thin armor makes her susceptible to penetration from most Tier IX and Tier X battleships at all ranges.


While Des Moines has impressive firepower and AA, her maneuverability is mediocre and her armor is okay at best. With a standard cruiser speed of 33 kts and fast base rudder shift time of 8.6 seconds, Des Moines can evade incoming shells and torpedoes relatively well. However, while she can turn well, the speed loss on turning is massive enough to make her an easy target for any other ship with their guns loaded and ready. With her 30mm midsection(same as zao and hindenburg), it makes her vulnerable to bb shells of 431mm and above, also, the bow is 27mm, which is vulnerable to 406mm guns and above. Additionally, because of how flat her stern is designed in comparison to the other Tier X heavy cruisers, this makes her extremely susceptible to enemy battleship AP shells being able to penetrate her citadel through her stern.

In contrast to her weak points, the Des Moines high shell arc and gun layout gives her a unique advantage that her cruiser colleagues at her tier lack and as such she is capable of weighing anchor behind an island and lob shells over the island at distant targets with relative safety. Should the island be too tall, one can also park the ship around the corner of an island while bow on to act as a deterrent to advancing enemy ships, while presenting a relatively small profile. Exploiting this technique allows one to turn a disadvantage into an advantage. Additionally, firing AP shells at bigger targets such as battleships can deal a surprising amount of damage in such a short time. However, it is recommended to do so only when she is close enough to have the rounds deal maximum penetration or if the target is broadside. Furthermore, given her rate of fire and decent fire chance, this makes Des Moines a deadly flamethrower to battleships within reach.


Overall, unlike most other Tier X cruisers, Des Moines cannot fight as effectively on open water due to her mediocre armor, slow shell velocity, and speed loss when turning. If the player has mounted the Legendary Upgrade Enhanced Propulsion Plant (

), then Des Moines can become a very agile ship that will prove extremely difficult to hit, provided the player can use their speed and rudder accordingly. But should they play without said upgrade, then a more safe approach for each game would be to play defensively during the initial stages of the game, while becoming more aggressive slowly towards the end. But in general, how aggressive the player should be depends upon the flow of the battle.

As a tier X ship, Des Moines has no modules to research.

in Slot 3, due to the already quite slow turret traverse. When working in close, a slow turret can more than offset the increase in firepower. For PvE play, this is the build to take.

in Slot 6 changes the equation. Due to the increasing dispersion at range and lack of a turret traverse penalty, Aiming Systems Modification 1

is called for in Slot 3. This option stretches her range out to 18.4km, on par with Moskva and Hindenburg.

) for Slot 6, which decreases her rudder shift and halves the time taken to accelerate to full speed. With this upgrade and Propulsion Modification 1

, Des Moines can accelerate from 0-27kts in about 8 seconds — most useful when exploiting terrain or open water dodging, this is by far the best modification to take.

can be useful, especially combined with Eye in the Sky. However, playing forward, the better alternative is Surveillance Radar For a long range gunship build, radar is less important and long-duration Hydroacoustic Search

Des Moines was launched 27 September 1946 by Bethlehem Steel Company, Fore River Shipyard, Quincy, Massachusetts; sponsored by Mrs. E. T. Meredith, Jr.; and commissioned 16 November 1948, Captain A. D. Chandler in command. She became the first of her class to mount the semi-automatic Mark 16 8 inch turrets and carry the new Sikorsky HO3S-1 utility helicopters in place of seaplanes. It was named after the capital of the state of Iowa.

In a varied operating schedule designed to maintain the readiness of the Navy to meet the constant demands of defense and foreign policy, Des Moines cruised from her home port at Newport, Rhode Island and after 1950, from Norfolk, Virginia on exercises of every type in the Caribbean, along the East Coast, in the Mediterranean Sea, and in North Atlantic waters. Annually between 1949 and 1957 she deployed to the Mediterranean, during the first seven years serving as flagship for the 6th Task Fleet (known as the 6th Fleet from 1950). In 1952, and each year from 1954 to 1957, she carried midshipmen for summer training cruises, crossing to Northern European ports on the first four cruises. She also sailed to Northern Europe on NATO exercises in 1952, 1953, and 1955. On 18 February 1958, she cleared Norfolk for the Mediterranean once more, this time to remain as flagship for the 6th Fleet until July 1961 when was placed out of commission in reserve.

Through her Mediterranean services Des Moines contributed significantly to the success of the 6th Fleet in representing American power and interests in the countries of Southern Europe, Northern Africa, and the Near East. She made this contribution through such activities as her participation in NATO Mediterranean exercises; her call to seldom-visited Rijeka, Yugoslavia, in December 1950 and Dubrovnik, Yugoslavia, in May 1960, and to many other ports as a regular feature of her schedule; her cruising in the eastern Atlantic during the wake of the Suez Crisis of 1956; and service on patrol and as control center for American forces in the Lebanon crisis of 1958. Film footage of her cruising with other ships of the United States 6th Fleet was used in the introduction and conclusion of the movie: "John Paul Jones" starring Robert Stack (Warner Brothers-1959).

After decommissioning in 1961 she was mothballed in the South Boston Naval Annex and eventually laid up in the Naval Inactive Ship Maintenance Facility at Philadelphia in maintained reserve. In 1981 the United States Congress directed that the Navy conduct a survey to determine if she and sister ship USS Salem (CA-139) could be reactivated (in lieu of two Iowa-classs battleships) to support the 600-ship Navy proposed by the Reagan Administration. The study concluded that while both ships would be useful in the active fleet, there was not enough deck space to add the modern weapons fit (Tomahawk cruise missiles, Harpoon anti-ship missiles, Phalanx CIWS mounts, radars and communication systems) that the ships would need to operate in a 1980's environment. In addition, the per-ship costs for the reactivations and updates (that were determined feasible) would be close to the costs for an Iowa, for a much less capable ship. Therefore, both ships remained in maintained reserve until they were struck off the reserve list in August 1993. After an attempt to turn her into a museum ship in Milwaukee, Wisconsin, failed — Salem did become a museum ship , however — she was sold in 2005, and then towed to Brownsville, Texas, for scrapping. By July 2007, she had been completely broken up. Her status officially changed to "disposed of by scrapping, dismantling" on 16 August 2007. Two of her dual 5"/38 gun mounts were donated to the USS Lexington (CV-16) museum in Corpus Christi, TX, where they can now be seen on display.

Her sister ship USS Newport News (CA-148) was scrapped in New Orleans in 1993. The third Des Moines-class ship, the USS Salem (CA-139), is a museum ship in Quincy, Massachusetts.

Ships of U.S.A.
Cruisers
Retrieved from "http://wiki.wargaming.net/en/index.php?title=Ship:Des_Moines&oldid=318413"
Categories:
Your location:
To log in, select the region where your account is registered
CIS Europe North America Asia
Or use Microsoft Login to enter WoT XBOX ecosystem
Log in