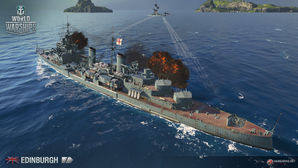 By now, veterans of the branch are accustomed to having access to the Repair Party consumable. Edinburgh is no different in this regard, though she has access to a much more potent version of the consumable, one that restores as much as 40% of her health pool per use. Neptune and Minotaur have heals of similar effectiveness, meaning that ships at the high end of the Royal Navy cruiser branch can be exceedingly difficult to sink if they are allowed to escape sustained fire with any health remaining. Like her predecessors, Edinburgh has the tools to make good that escape — should it become necessary — through her ability to equip the Smoke Generator

consumable. Additionally, Edinburgh is the first ship in the line given access to Surveillance Radar

. Though she must give up her access to Smoke Generator in order to have Surveillance Radar available, the combination of radar and Hydroacoustic Search

make her an incredibly potent destroyer hunter. Any destroyers that find themselves within 9.0 km of a radar-equipped Edinburgh are in a very vulnerable position.

Her armor is improved over that of Fiji, and while she will stand up to heavy cruiser fire better than her predecessor, Edinburgh will still suffer when under fire from enemy battleships. Her torpedoes gain some extra range and are now capable of reaching targets at ranges out to 10.0 km, and her anti-aircraft damage per second is nearly double that of Fiji. She is a well-rounded cruiser, but one that must be played very carefully in order to maximize her ability to punish lighter enemy units while minimizing her exposure to fire from enemy capital ships.

Hull (B) should be researched first, as it improves survivability with some sorely-needed hit points and improved rudder shift, as well as reinforcing the AA suite. Next should be the torpedoes; in contrast to Fiji's anemic torpedo upgrade, the extra range greatly increases opportunities for their use. The fire control should be upgraded last, as the ballistics are quite poor near maximum range.

There are a three key choices that dictate how Edinburgh will play: the upgrades in Slots 1 and 3, and which consumable she chooses to go along with Hydroacoustic Search

The recommended upgrades for Edinburgh are as follows:

should be mounted when specializing for AA duties.

At Level 1, commanders are encouraged to take Last Stand to ensure Edinburgh retains at least some maneuverability even when her engines or rudder are knocked out. At Level 2, Priority Target is a key skill as it allows players to know when it is (theoretically) safe to expose their broadside in a turn without severe punishment. Other skills of interest for Edinburgh at Level 2 are Consumables Enhancements (to lengthen the duration of either her smoke screen or radar consumables) and Expert AA Marksman (a good team-play option that bolsters her AA suite). At Level 3, the key skills are Adrenaline Rush and Superintendent, both of which are highly recommended. Captains who find themselves relying heavily on her torpedo armament may also be interested in taking Enhanced Torpedo Explosive Charge. At Level 4, the key skill that captains should prioritize is Concealment Expert in order to further enhance Edinburgh’s already great concealment. Captains may also be interested in taking AA Gunner (another good team-play option that gives an additional boost to an already solid AA suite) or Radio Location (to improve situational awareness, particularly against outflanking destroyers).

Edinburgh can equip the following consumables:

. All other builds should stick to Smoke Generator

is still not recommended for the same reason as for the preceding tier ships - the fighters are not particularly effect in the AA role. Spotting Aircraft

is also not recommended due to the difficulty in shooting at targets at long range, as it is already fairly difficult to hit targets with Edinburgh’s existing range.

Edinburgh’s anti-aircraft defenses need all the help they can get; November Echo Setteseven (

) earns an easy recommendation, as does India Delta (

) will assist in overcoming some of her deficiencies in top speed, and November Foxtrot (

) will help shorten the cooldown time of her all-important suite of consumables. X-Ray Papa Unaone will increase the action time of her smoke allowing Edinburgh to produce longer curtains of smoke, giving her more space to move around as well as technically increasing the total time she could potentially spend hidden within her own smoke so long as she finds herself within the final puff of smoke as the first puffs start to dissipate. 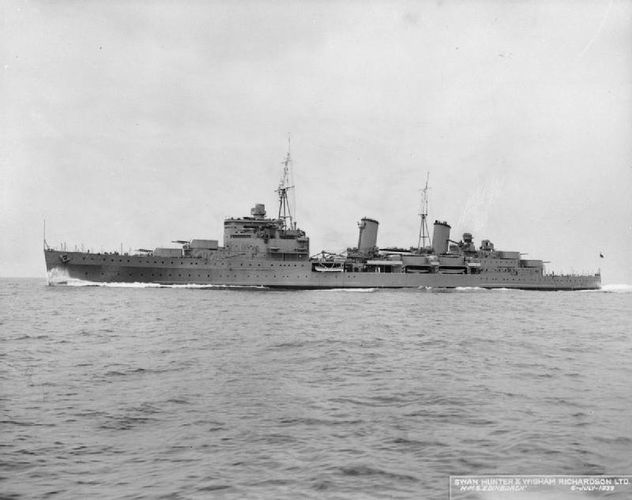 The ships of the Town class were constructed in response to the Japanese Mogami and American Brooklyn class cruisers, which were both armed with fifteen 6-inch (152mm or 155mm) guns. British ship designers sought to match the other cruisers’ number of guns, but due to length restrictions, were unable to properly fit five turrets onto the ships. Another plan that was developed called for the Edinburgh class to be mounted with quadruple 6-inch turrets; however, this idea was abandoned due to the difficulties in manufacturing such a turret that performed adequately. Ultimately, the new cruisers were mounted with twelve 6-inch (152mm) guns in four triple turrets, arranged in an A-B-X-Y position. However, a new turret, designated the Mk.XXIII was used, which used more powerful motors and a more efficient 'long trunk' ammunition supply, which could provide between 10 to 12 shells to the gun per minute. The effective maximum rate of fire stayed the same as earlier cruisers however, at 8 rounds per minute. The new Mk.XXIII triple turret is easily distinguishable from the earlier Mk.XXII used on the previous Town class cruisers by the flattened edge between the turret roof and face, as opposed to a curved edge.

Edinburgh, like preceding cruisers, was designed to have armor capable of protecting the ship against 152mm caliber gunfire. The ship featured a smaller magazine and citadel space compared to previous cruisers. This shortened length allowed for more armor to be mounted around the machinery and weaponry spaces. Additionally, the Edinburgh class carried more powerful machinery than previous Southampton sub-class, which allowed her to maintain the designed speed of 32 knots, despite her increased displacement. Her increased fuel capacity, granted the ship an extended range over the older Town class ships. Both Edinburgh and Belfast would receive upgraded radar systems and increased anti-aircraft capabilities at the beginning of World War II.

Other differences from the other Town class cruisers included the aircraft catapult being in front of the forward funnel instead of behind it, and the addition of 2 more twin 4-inch (102mm) dual-purpose mounts bringing the total to 3 dual mounts per broadside. The larger size of the ship also allowed the octuple 40mm 'pompom' mounts to be fitted, as opposed to the earlier Town class receiving quadruple 40mm 'pompom' mounts.

Edinburgh was laid down at the Swan Hunter Shipyard in Tyne and Wear, England on 30 December 1936, twenty days after her only sister ship Belfast was laid down. She was launched on 31 March 1938 and spent the following year fitting out and beginning her sea trials.

Edinburgh was commissioned on 6 July 1939 and was assigned at Scapa Flow with the Home Fleet at the outbreak of World War II. Her early war service consisted of standard anti-shipping patrol in the North Atlantic. In October 1939, Edinburgh was attacked by air and sustained light damage, although not directly hit. She was then assigned to escort convoys to Norway, but was ordered to join the hunt for the German Battleships Scharnhorst and Gneisenau on the 23rd October. She returned to port for refit in March 1940, which strengthened her anti-aircraft loadout and corrected design weaknesses. Edinburgh returned to convoy duty in October 1940, this time in the South Atlantic, but returned north to patrol for German raiders around Iceland with HMS Hood, HMS Cossack and the E-class destroyers HMS Electra, HMS Escapade and HMS Echo.

In early 1941, Edinburgh escorted North Atlantic Convoys such as TC9 and WS7, as well as covering the successful commando raid on the Lofoten Islands. In May 1941, Edinburgh intercepted a German weather ship off Norway, and was briefly detached from convoy duty and ordered to attempt an intercept of Bismarck, but Bismarck was sunk before Edinburgh could find her. She did however, find the German supply ship Lech, taking it as a prize.

Edinburgh returned again to convoy duty, this time alternating between Malta and the South Atlantic, including the successful Malta relief Operations Substance and Halberd. In December 1941, she was assigned to escort duty in the Arctic. She made two successful voyages to Murmansk, with a short period under refit in between in January and February 1942. However, on the return trip with convoy QP-11 in April 1942, Edinburgh was torpedoed twice by the German submarine U-456. The first hit her amidships on the starboard side, which caused a heavy list, which, but the crew stabilized the ship. The second torpedo destroyed her stern, including her steering gear, leaving the ship crippled. She was taken under tow back to Murmansk, escorted by 2 destroyers and 4 minesweepers and a Russian tug that arrived later, but Edinburgh was attacked two days later by three German destroyers, Z-7 Hermann Schoemann, Z-24 and Z-25. In the ensuing close range battle (minimum ranges of 2.8 km), Edinburgh managed to severely cripple Schoemann which later had to be scuttled, but a torpedo aimed at one of Edinburgh’s escorts hit Edinburgh on her port side, directly opposite the first torpedo hit from U-456. Salvage was impractical in the cold Arctic waters, she was declared a loss. Her crew was evacuated and she was scuttled by the escorting destroyer HMS Foresight on 2 May 1942, after numerous failed attempts to sink her using gunfire and depth charges. Of her given compliment of 847, 790 were rescued before she was scuttled, although other values are given.

Edinburgh was carrying 4.5 tons of gold bullion to the UK as a partial payment from USSR for the lend-lease equipment. Between 1981 and 1986, all but 5 of the 465 gold bars were recovered by divers from her wreck on behalf of the British Government, approximately 245m (800ft) below the surface of the sea. The fifth Royal Navy ship to carry the name, Edinburgh earned 4 battle honors during her service in World War II (Norway 1940, Bismarck 1941, Atlantic 1941, Arctic 1941-2).

Sister ship HMS Belfast, although laid down and launched before Edinburgh, was commissioned into the Royal Navy later. Belfast struck a mine in late 1939, keeping her under repair until November 1942, after her sister had been sunk. She would not share the same fate though, as Belfast went on to escort Arctic convoys, play a critical role in the sinking of the German Battleship Scharnhorst, provide fire support on D-Day, and serve in the British Pacific Fleet in 1945. Her career extended beyond the Second World War and into the Korean War before she was finally retired from active service in 1963. Since 1971, Belfast has served as a museum ship, moored on the River Thames in London as an iconic landmark, the last surviving major Royal Navy surface combatant from the World War II era.

Ships of U.K.
Cruisers
Retrieved from "http://wiki.wargaming.net/en/index.php?title=Ship:Edinburgh&oldid=325473"
Categories:
Your location:
To log in, select the region where your account is registered
CIS Europe North America Asia
Or use Microsoft Login to enter WoT XBOX ecosystem
Log in