The most advanced British light cruiser among those designed during World War I. The ship's powerful propulsion allowed for high speeds. Her larger displacement helped strengthen the cruiser's artillery and torpedo armament as well as equip her with aircraft-handling gear.

Unfortunately, this represents a bit of a step back for the line, putting Emerald in much the same situation that Caledon was in at Tier III: she's badly outgunned by most opponents she will face. Every other Tier V cruiser save Furutaka can get more barrels on target than Emerald can, and Furutaka’s guns are significantly larger due to the Japanese cruiser line transitioning to heavy cruiser designs. The situation gets even more unpalatable when Emerald finds herself up-tiered into Tier VII games (at least Caledon can only see opponents one tier higher). As icing on the cake, the citadel is easily penetrated and positively huge: an Emerald captain should never forget that exposing the ship's sides to any enemy ship larger than a destroyer is almost invariably fatal.

Like Caledon and Danae, captains looking to get the most out of their Emerald will have to play incredibly smart and make maximum use of her torpedoes and consumables to see that she survives deep into games. Her stock torpedoes are equivalent to the upgraded ones on Danae, with the torpedo module upgrade boosting their damage, while upgrading the 6.0 km range to 7.0 km. Emerald is more sluggish on her rudder and has a larger turning circle than Danae, so new captains should take some time to get to know her before putting her in situations that require precise maneuvering.

The recommended upgrades for Emerald are as follows:

While a short main battery range has its downside, it also makes for a smaller maximum detection range. A possible destroyer hunter build would leave the range un-buffed and go for Radio Location and Concealment Expert with the purpose revealing yourself to as few enemies as possible when opening up on your prey.

Emerald can equip the following consumables:

As a Royal Navy light cruiser, Emerald can be deadly to enemy destroyers, but also rather frail against them. This makes it advisable to equip Smoke Generator

is not recommended due to potential difficulty in reaching out to your targets. However, some players may find Spotting Aircraft

due to the rather abysmal range of the main battery. But Smoke Generator

can work very well in conjunction with Hydroacoustic Search

) are highly recommended to optimize the ship’s Repair Party

consumable. Flags that speed up the research process, such as Equal Speed Charlie London (

One Catapult
One Hawker Osprey Seaplane 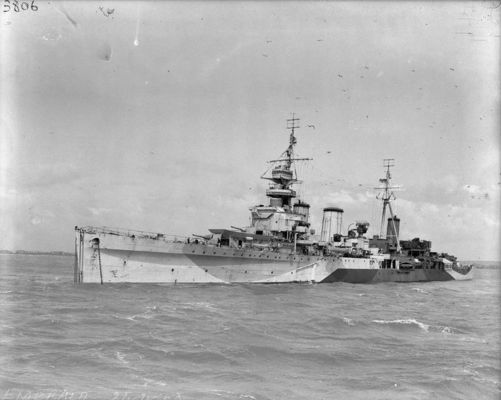 HMS Emerald at anchor near Portsmouth during World War II.

The "E" class cruisers were designed and ordered in response to German cruisers believed to be under construction during World War I, and those that did see service in raiding convoys like the Brummer class. These new cruisers were designed as enlarged versions of the preceding "D" (Danae) class cruisers, and speed was prioritized above all else. Therefore, greater dimensions of over 7,500 tons were required to house the more powerful propulsion system, capable of maintaining a 33 knot top speed, 4 knots faster than the previous D class. On the other hand, despite the larger size and greater displacement, the E class retained the same protective scheme used for older cruisers, and only one extra 6-inch (152mm) gun was added over the D class, bringing the armament of Emerald up to seven 152mm guns. Five were mounted on the centerline of the ship and two guns mounted on the sides amidship.

Both Emerald and Enterprise were upgraded and rebuilt extensively before and during World War II. In 1929, quadruple torpedo tubes were fitted, giving them a comparatively massive advantage in torpedo armament over the previous classes of cruisers. Aircraft catapults were fitted on both ships in the mid-1930s, being placed amidships, requiring the after mast to be moved forward of the third funnel. This mast was latter converted into a tripod mast. Also in 1934, the funnels were made 5 feet taller. During world war 2, the two ships had their anti-aircraft armaments extensively augmented, using a variety of 12.7mm, 20mm and 40mm guns, although later during the war, this was at the expense of the aircraft catapult, and aft banks of torpedo tubes. Enterprise was fitted with an experimental twin 6-inch (152mm) gun turret, which replaced her forward super-firing single 6-inch mounts as compared to Emerald.

Commissioned in 1926 after long delays due to fiscal restrictions and decommissioning priorities, Emerald joined the Eastern Fleet, serving there until 1933. Emerald was then inactive for just over a year, and once again joined the Eastern Fleet until 1937 when she was again paid off and placed on inactive status. Re-activated for World War II, Emerald briefly joined the Northern Patrol until she was transferred to Halifax, Nova Scotia in October 1939 for convoy escort duties. She served in this capacity until 1940, when she received a special mission to transport gold to Canada as payment for war materials. In October 1940, she took part in Operation Medium, escorting the battleship HMS Revenge to the French port of Cherbourg. In 1941, Emerald was transferred to the Indian Ocean for escort duties, participating in operations in Iraq and the Indian Ocean.

After the Japanese entry into the war, Emerald once again joined the Eastern Fleet, serving part of her tour as flagship of the Fast Group, continuing her service in the Indian Ocean. Emerald returned to the U.K. for refit in August 1942 and returned to the Eastern Fleet in early 1943 for escort duties until early 1944. Returning once again to the U.K., Emerald participated in the Normandy landings where she supported Gold Beach with naval gunfire until mid-July 1944. Placed in reserve in late 1944, Emerald became a designated target vessel and was sunk as a result in 1947. She was re-floated in 1948 and sold for scrapping in Scotland shortly after. Emerald earned two battle honors during her service.

Enterprise, like her sister, was delayed in completion until 1926, and upon completion was assigned to the East Indies through 1934. During this period, her distinguishing twin turret was fitted. She returned home for a major refit and overhaul, and rejoined the fleet in the East Indies in 1936, conducting transport duties to China station until 1938 when she was paid off. Re-activated at the beginning of World War II, Enterprise joined the Halifax (Nova Scotia) Force until 1940, when she returned home to participate in the Norway Campaign, providing naval gunfire support to troops ashore. Returning home again for quick refit, Enterprise joined Force H in the Mediterranean and took part in the action at Mers-el-Kébir against the French Fleet.

From 1940 through 1941, Enterprise was engaged in the South Atlantic and Indian Ocean hunting for German raiders, including Admiral Scheer. In 1942 she was assigned to convoy escort on the Australian routes before briefly joining the Eastern fleet. Enterprise then returned home late in 1942 for an extensive refit and overhaul, which lasted until late 1943. Near the end of the year, Enterprise joined the Home Fleet and participated in the continental blockade in the Bay of Biscay, where, with HMS Glasgow, she engaged in a short, sharp action with German torpedo boats and destroyers, sinking the T-22-class T-25 and T-26 and the Z-23-class Z-27. Enterprise next participated in the Normandy invasion, providing naval gunfire support off Utah Beach before being placed in reserve early in 1945. Enterprise participated in repatriation transport duties until early 1946, when she was paid off and sold for scrapping. Enterprise earned four battle honours during her service.

Ships of U.K.
Cruisers
Retrieved from "http://wiki.wargaming.net/en/index.php?title=Ship:Emerald&oldid=314006"
Categories:
Your location:
To log in, select the region where your account is registered
CIS Europe North America Asia Republic of Korea
Or use Microsoft Login to enter WoT XBOX ecosystem
Log in