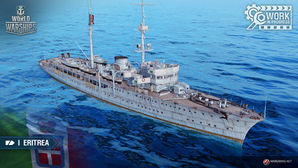 A support ship with diesel-electric propulsion and rapid-firing guns, designed to operate in remote theaters.

Eritrea has the highest hit point pool of a Tier I vessel, with great rate of fire guns, this vessel will ease you into the Italian cruiser line. Only the premium ships Duca d'Aosta and Duca degli Abruzzi have access to the standard HE shell type like the Eritrea has.

The game play is similar to other vessels of this tier, but with the large hit points and the guns rate of fire, Eritrea can deal damage quickly and efficiently. The gun have floaty shell arcs which may take new players some experience to master over a range.

Eritrea has no modules to research.

The design requirements for what would eventually become Eritrea were first put forward in by the Regia Marina in 1932, calling for a colonial sloop with a displacement of 2,000 tons standard and a speed of 20 knots, which was the largest (and fastest) a vessel could be while not being restrained by the Washington Naval Treaty. Traditionally, Italy had assigned smaller protected cruisers to the role of colonial stations, but in the post-Treaty world, cruisers were larger, more expensive, and regulated by treaties – so cheaper, purpose-built vessels would have to take on this role. For inspiration, the Italians looked the French colonial avisoes of the Bougainville-class, which looked to have successful qualities.

For these colonial vessels, long endurance was required, which meant a diesel propulsion system was adopted. Armament was quite heavy, four (2x2) 120/50, two 37mm AA cannons, 12.7mm machine guns, and 100 mines. Ansaldo, who prepared the design, presented it in February 1934, but the changing international situation lead to a change in requirements – namely, to also act as a submarine tender. This would require a workshop fully equipped for submarine repairs, battery charging equipment, air compressors, additional accommodations for submarine crews, and a small hospital. This created a major increase in displacement, despite the extensive use of electric welding, so the armament was reduced, the newer 120mm guns being replaced by older 120/45 models, and the anti-aircraft armament overall reduced. As finalized, the design was 2,200 tons standard, and fully loaded reached 3,117 tons. Power for the 96.9-meter sloop was provided by two FIAT 6-cylinder diesel engines, each producing a sustained 3,500 bhp (rising to 3,900 bhp at maximum power). They directly drove the shafts, with the combined 7,000 bhp allowing for a speed of 18 knots. Also fitted were a pair of Marelli 650 hp electric motors, powered by diesel generators, which produced 1,300 hp for a cruise speed of 11 knots. The system combined could produce 8,300 shp for a top speed of 20 knots. Endurance was 8,000 nm at 10 knots.

The armament of the sloop was four Canet-Schnieder-Armstrong 102mm/45 Modello 1918/19 in two twin mounts (one fore, one aft). These older guns were commonly found on auxiliary cruisers, transports, and some of the older destroyers and light scouts (such as the Leone-class). They fired 22 kg shells at a velocity of 750 me/s, for a maximum ballistic range of 12,600 meters at an elevation +32° elevation. Also fitted was a pair of Vickers-Terni 40mm/39 Modello 1917 anti-aircraft cannons on raised platforms aft of the funnel. These guns were fairly obsolete, with limited rate of fire and effective range. For close-range defense four 13.2mm/76 Modello 1931 machine guns were fitted, in single mounts.

The design was overall successful, even if much of the armament was dated by the standards of Italian cruisers. The major shortcoming of the design was the weakness of the FIAT diesel engines and the unreliability of the propulsion system – a successor design, Ethiopia, would have adopted more powerful and more reliable Tosi engines. She would have disposed of the submarine tender role, in favor of increased endurance for commerce raiding operations.

Eritrea was laid down on 25 July 1935 at the Royal yards of Castellammare di Stabia, and launched on 28 September 1936. She was completed on 28 June 1937, just under two years after work had started, and commissioned into the Regia Marina. Her initial deployments consisted of three missions in the Western Mediterranean on operations related to the Spanish Civil War, until she was assigned to the Red Sea, arriving at Massawa on 8 May 1938 after a brief refit at Pola. Flagship of the naval command in East Africa, most of her pre-war service consisted of ‘showing the flag’ missions in local ports.

On 10 June 1940 Italy entered WWII, resulting in her Red Sea forces being immediately isolated from home waters. With little opportunity for long-range missions, Eritrea spent much of this period laying defensive minefields and providing anti-aircraft defense. In 1941, the isolated Italian position in East Africa began to deteriorate, and it was decided to send Eritrea on a long-range mission to Japan. Much work was done to prepare her for this voyage – her masts were cut down, and her minelaying equipment was removed. She also ditched searchlights and the cables for re-charging submarine batteries. Service boats were disembarked, in order to make room for an additional 180 tons of fuel in the form of 780 barrels, carefully placed so as to keep AA arcs clear. The hull was scraped for optimal performance, and the crew was reduced by some 100 men. After brief trials to make sure everything worked properly, she was deemed ready for the voyage, and slipped anchor on the night of 19 February 1941. The 31-day voyage that followed proved tense, as Commander Marino Iannucci, captain of Eritrea, had to guide her past the British blockade of Italian East Africa, through the British-dominated Indian Ocean, and then through the Sunda Straits disguised as a Portuguese escort ship (Pedro Nuñes) in order to fool Dutch naval intelligence. The ruse worked, and she was able to safely navigate the Dutch East Indies north, arriving at Kobe, Japan, on 22 March 1941. In the ship’s log, Iannucci simply wrote; “9,555 miles; 754 hours of navigation; consumption of fuel 440 tonnes”.

In April the Japanese authorized work to be done on Eritrea, initially being reluctant. Mitsubishi was handed the work to refurbish the ship, finishing in July. On 24 August Eritrea departed Japan for Shanghai, where she remained until the Japanese declaration of war on 7 December 1941.

With this, Eritrea once again became active, operating as a support ship for Italian submarines operating in the far east. In this role she regularly made trips from Singapore to Penang and Sabang, recharging batteries, acting as a mobile hospital, and helping with repairs. On 9 September 1943, when the armistice of Cassibile was announced, Eritrea was fortunate enough to be at sea in the Malacca Strait. Iannucci immediately ordered a course west to Colombo, and, after dodging Japanese aircraft and warships, was able to make port in Colombo on 14 September. After the declaration of war against Germany on 13 October, Eritrea began conducting a similar mission as before – but this time supporting Allied submarines. In late 1944, she was finally able to return to Italy, arriving at Taranto on 23 October. After some months of repairs, she was re-deployed to the Indian Ocean, returning to Taranto again on 7 February 1946, before being sent back again, this time to Chinese waters, before returning once more on 16 October.

The 1947 Peace Treaty with Italy gave Eritrea to France as a war prize, as a reparation for French ships raised by the Italians after being scuttled at Toulon. Eritrea returned to her birthyard at Castellammare di Stabia after a decade, where preparatory work was done, stripping out much of her equipment. On 27 January 1948, Eritrea was decommissioned from the Italian Navy (now the Marina Militare), and re-named F1. A civilian crew sailed F1 to Toulon, where, on 12 February, the French navy took charge of the hull. After doing their own work on it, they recommissioned as aviso Francis Garnier on 12 January 1950. The ship conducted ‘show-the-the flag’ missions in French Polynesia before returning to France in 1951, where much of the armament was replaced in a refit lasting from October 1951 to September 1952. Her main guns were replaced by, ironically, the more modern Italian guns that had originally be intended for the design – three 120mm/50, with a single mount forward and a twin mount. Light AA was replaced by four 40mm Bofors and four 20mm Oerlikons. Sensor, communication, and fire control equipment was upgraded, and the ship was re-commissioned as an escort vessel with the pennant F 730. She was sent east again, this time taking part in the ill-fated French war in Indochina, mainly helping to evacuate refugees. For the rest of her career (1955 to 1966) she operated as a support ship for French nuclear tests, before finally being expended as a target on 29 October 1966, resisting a fusillade of 57mm and 100mm HE rounds, as well modern 250 kg and 400 kg bombs, before finally succumbing to depth charges dropped by ASW aircraft.

Ships of Italy
Cruisers
Retrieved from "http://wiki.wargaming.net/en/index.php?title=Ship:Eritrea&oldid=318971"
Categories:
Your location:
To log in, select the region where your account is registered
CIS Europe North America Asia
Or use Microsoft Login to enter WoT XBOX ecosystem
Log in