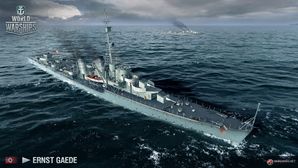 One of the designs for the Zerstörer 1934 destroyer. The ship was designed to be relatively large for her type and featured a very powerful artillery armament of 150 mm cruiser caliber guns. This caliber was unusual for destroyers.

She has the intriguing choice between two different calibers of guns: the standard 128 mm destroyer guns, and 150 mm guns that more resemble light cruiser guns (albeit with fewer barrels than a light cruiser). Both have their advantages:

Ernst Gaede is a very interesting ship; she's one of a handful that have access to two different gun calibers. Hull (B) is a fairly minor upgrade to her anti-aircraft suite and rudder shift. The upgraded Fire Control System module is the best thing to invest in first, providing a badly needed increase in range. After that, it's largely captain's preference. Captains can unlock the improved Main Battery module in order to experiment with the 150mm guns, or spend experience on a minor torpedo buff. Hull (B): the rudder shift buff is nice but not essential and the improvement to her AA battery is largely cosmetic.

The recommended upgrades for Ernst Gaede are as follows:

Note that the recommendation for Gun Feeder only applies when the 150mm gun option is being used.

The choice of which Signal Flags to mount will confer to the individual preference of each captain, and are subject to great variation, although there are certain flags which suit Destroyer gameplay better. Captains should mount India Yankee (

) to decrease reload time of consumables, and mount Sierra Mike (

) to increase chance of causing flooding and Juliet Charlie (

) to mitigate risk to magazine detonation from mounting the former flag. If captains wish to buff their primary artillery, they are encouraged to mount Victor Lima (

After World War 1 the German Navy started planning for new destroyers in 1932. While the majority of designs and proposels were made by official sites, private companies also attempted to design the first generation of German Destroyers. One of these drafts came from the AG Vulcan Stettin, which was located in Hamburg. This design allowed an armament of four single mounted 128mm or 150mm guns and two Torpedo launchers, either in triple or quadruple mountings.

However, in 1933 it was decided that the Destroyer should have two quadruple Torpedo launchers and a fifth gun mount. As the latter requirement could not be met with this design, it was dropped and no longer considered.

Ships of Germany
Destroyers
Retrieved from "http://wiki.wargaming.net/en/index.php?title=Ship:Ernst_Gaede&oldid=318949"
Categories:
Your location:
To log in, select the region where your account is registered
CIS Europe North America Asia
Or use Microsoft Login to enter WoT XBOX ecosystem
Log in