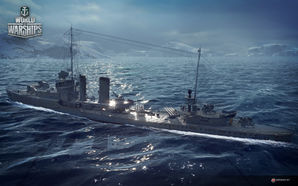 The first U.S. destroyer of the new generation. She was armed with dual-purpose artillery, which significantly enhanced her AA defenses. The torpedo tubes were placed along the ship’s centerline, and thus they could be used more efficiently. The destroyers of this class were modernized to receive automatic AA guns.

Farragut continues the evolution of American destroyer design where Nicholas left off, retaining the same main battery guns — adding one more — while moving to a centerline-mounted torpedo configuration.

Players who enjoyed Nicholas will find more of the same with Farragut. Her speed and handling characteristics are nearly identical, and she starts off with the exact same 5.5 km range torpedoes (the Mark 11) of her predecessor. The eventual torpedo upgrade module is worthwhile, giving her almost a full kilometer more of torpedo range and, more critically, faster fish. The move to centerline mounts for her torpedo launchers takes some getting used to; she can put eight torpedoes into the water on either side, but captains are likely to miss the flexibility offered by preceding ships of having launchers on both sides of the ship.

Irritatingly, Farragut has a smaller health pool than Nicholas; Level 3 commander skill Survivability Expert is almost necessary in order to get the most out of her. Like her immediate predecessor, she can exchange Engine Boost

Overall, Farragut is a solid destroyer that loves maps with lots of islands she can hide in. American destroyer captains wishing for the capability to fire torpedoes from beyond their detection range must remain patient and wait for Mahan.

Availability of researchable upgrades for Farragut is as follows:

As a gunboat destroyer, Farragut is best served by maximizing her health pool; this makes Hull (B) the best place to spend early experience gains. Her stock gun range is quite good, so snag the Torpedo module upgrade next, followed by the Fire Control System module to buff her main battery range.

The recommended upgrades for Farragut are as follows:

There aren't a lot of "out of the box" options in terms of upgrades for Farragut captains. Main Armament Modification 1 is the top pick in Slot 1, while Aiming Systems Modification 1 is recommended for Slot 3. Engine Room Protection in Slot 2 and Propulsion Modification 1 in Slot 4 are both highly recommended in the interests of sustaining Farragut’s mobility while under fire from enemy ships.

Preventative Maintenance at Level 1, Last Stand at Level 2, and Concealment Expert at Level 4 are easy recommendations for Farragut commanders.

Level 3 offers a number of good options. Survivability Expert is a safe pick, buffing Farragut’s health pool by 20%. Demolition Expert or Basic Firing Training are recommended for captains looking to get more damage out of their main battery. Superintendent is a strong choice if premium consumables are not equipped.

Alternate Level 4 skill recommendations include: Advanced Firing Training to buff the range of Farragut’s main battery (as well as the damage of her flak bursts); Radio Location, to aid in hunting down enemy destroyers; and Inertia Fuse for HE Shells, which will improve Farragut’s main battery damage against enemy capital ships.

Farragut can equip the following consumables:

) is recommended; Farragut captains who work into torpedo range of enemy ships need to get maximum results. Juliet Charlie (

) is also a well-advised choice for any destroyer. Victor Lima (

) signals are similarly worthy of consideration to increase the fire chance of her main battery shells.

Ships of U.S.A.
Destroyers
Retrieved from "http://wiki.wargaming.net/en/index.php?title=Ship:Farragut&oldid=321598"
Categories:
Your location:
To log in, select the region where your account is registered
CIS Europe North America Asia
Or use Microsoft Login to enter WoT XBOX ecosystem
Log in