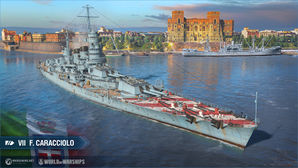 The first super dreadnoughts of the Regia Marina designed to carry 381 mm guns. Construction of the ships commenced during World War I. They were designed to match the new fast battleships being built for foreign navies.

Tier VII Italian Battleship Francesco Caracciolo marks a new era in ship design for Italian battleships. She is the first of her line to be outfitted with the 381mm guns characteristic of high tier Italian battleships. In addition, her hull received many noticeable improvements over her predecessor Andrea Doria, most notably in the areas of armor, speed, and concealment.

Francesco Caracciolo is armed with 8 381mm guns arranged in a 4x2 configuration. These guns load either SAP or AP shells. While these guns may prove inaccurate at times, have excellent shell velocity and penetration values. This makes them effective against heavily armored targets such as enemy battleships or heavy cruisers. Additionally, her AP shells have the ability to overmatch up to 26mm of armor. This makes her AP especially potent against same or lower tier battleships as well as against many of the cruisers in her matchmaking spread. Carraciolo’s SAP shells have 92mm of penetration, making them effective against targets which her AP does not overmatch. When shot at destroyers, however, these SAP shells will almost always yield over penetrations, making them no less effective then her AP shells. This combined with the lack of main battery H.E means that captains will find it difficult to damage enemy destroyers.

Francesco Caracciolo has an above average armor scheme as compared to other Tier VII battleships. While she has the 26mm bow and stern plating that is standard at Tier VII, she also receives a 150mm lower nose plate, capable of bouncing all battleship caliber shells. In addition, both her deck plating and her citadel roof are well armored, at 30mm and 80mm respectively. This makes her deck resistant to shots at long range from enemy battleships, as well as from low caliber H.E shells found on destroyers and light cruisers. In addition, she has an outstanding torpedo belt, which reduces damage taken from torpedoes by 42%.

With a surface detectability range of 14.32km, Francesco Caracciolo ranks among the stealthiest battleships at her tier. She can use this stealth to her advantage by placing herself in unexpected positions and using the element of surprise to land devastating salvos on unsuspecting enemy ships. However, she proves to be sluggish, having a high rudder shift speed of 20 seconds. In addition, her anti aircraft suite is underwhelming, having mediocre continuous dps values and atrocious range.

Due to her well protected hull and excellent concealment, Francesco Caracciolo is most comfortable in the mid range. The mid range is also where her guns shine, having enough penetration to punch through the armor of even the most protected enemy battleships while having the shell speed to make them difficult to dodge. Francesco Caracciolo can be best described as an opportunistic ship, taking advantage of mispositioned enemies and punishing them, and vanishing to reposition for her next strike.

Due to the small gain in health, some captains may prefer the range buff first.

The recommended upgrades for Francesco Caracciolo are as follows:

The Francesco Caracciolo-class battleship is depicted in a fake World War 2 refit that was invented by Wargaming. The historical 1914 design does not exist in World of Warships.

Ships of Italy
Battleships
Retrieved from "http://wiki.wargaming.net/en/index.php?title=Ship:Francesco_Caracciolo&oldid=313787"
Categories:
Your location:
To log in, select the region where your account is registered
CIS Europe North America Asia Republic of Korea
Or use Microsoft Login to enter WoT XBOX ecosystem
Log in