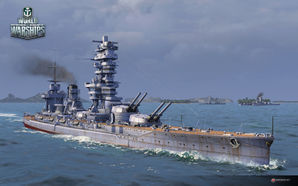 One of the mightiest battleships of her time. When built, Fuso was the largest warship in the world. She had a fairly powerful artillery and reasonably heavy armor.

The first of Japan's locally produced super-dreadnoughts, Fuso is a solid-performing Tier VI battleship — particularly once the time and effort of unlocking Hull (B) is invested. Featuring a powerful armament of six turrets with each packing a pair of 14-inch guns, Fuso packs the firepower to potentially wipe out nearly anything she faces — even higher tier battleships — due to her broadside being practically unrivalled by anything she is likely to face.

Once she has her final (1944) hull, she is a force to be reckoned with. Capable of reaching out and touching targets as far away as 21 km, Fuso is a formidable opponent. Her armor is a big improvement over Kongo, giving her the durability to fight pitched battles against other dreadnoughts; sadly, it does not match the armor protection her contemporaries from other nations receive, and her citadel is still fairly vulnerable (particularly from the rear). Fuso also gains a large mobility increase when upgraded, with a speed increase of almost three knots, allowing her to outrun American battleships and out-range them.

Captains will be tempted to show Fuso’s broadside to an enemy to bring all guns to bear, but due to the nature of her armor, this is ill-advised. Instead, Fuso should be sailed into range at an angle, preferably with a destroyer and cruiser screen. This will not diminish her fire power too much as her D-F turrets have good firing angles. Good map awareness will allow captains to determine when it is possible to bring all her turrets to bear on a target without over-exposing her own armor. If properly angled, Fuso can go up against even higher-tiered battleships on fairly equal terms.

Once in range of target, captains should keep in mind that while Fuso’s 14-inch guns are fairly accurate and rapidly firing, due to the longer ranges she will be firing at, they will require constant adjustment. Although each of Fuso's shells have a high alpha damage, the main battery guns have a horrible sigma value of 1.5. This means that the shells will be relatively more spread out. Firing the first three turrets as a ranging and accuracy shot, then firing the aft three often provides the best results in terms of accuracy. At the same time, captains must prioritize targets who are exposed, as the 14-inch shells will have an easier time inflicting massive damage. This is particularly true for equivalent and higher tier American and German battleships.

Initially, Fuso is painful; captains may be tempted to get the Propulsion upgrade first. Invest in the Propulsion module upgrade only after unlocking Hull (B). The Fire Control System module upgrade can be saved for last or skipped entirely; Fuso’s firing range of 19.8 km is more than adequate.

Fuso is a battleship that excels at range; he out-ranges every other battleship at Tier VI, and he's one of the most accurate battleships at tier. This is further emphasized by the heavier broadside and faster rate of fire. Close range brawling is something Fuso should actively avoid, as he loses his primary advantages and his armor can feel non-existent in close combat.

The recommended upgrades for Fusō are as follows:

is recommended to provide additional survivability to the main battery, but players who desire to specialize in the secondary or anti-aircraft armament may choose Auxiliary Armaments Modification 1

is recommended because it reduces shell dispersion of the main and secondary armaments. A captain wishing to specialize for secondaries should mount Secondary Battery Modification 1

will literally double the number of flak bursts it produces, but a different upgrade should prove more beneficial.

to lessen creeping damage. But for captains who chafe at his 15 second rudder, Steering Gears Modification 1

may be the preferred choice for Fuso.

Players can equip the following consumables on Fuso:

Players who wish to spend doubloons can equip Fuso with Type 16 camouflage that lowers her detection radius, reduces the accuracy of incoming shells, and increases the amount of experience she earns.

; all of which improve survivability. Captains wishing to improve the performance of their secondary battery should consider the addition of Mike Yankee Soxisix

Fusō (扶桑, a classical name for Japan) was the lead ship of the two Fusō-class dreadnought battleships built for the Imperial Japanese Navy, her sister ship being Yamashiro (山城, named after Yamashiro province). Launched in 1914 and commissioned in 1915, she initially patrolled off the coast of China, playing no part in World War I. In 1923, she assisted survivors of the Great Kanto Earthquake.

Fusō was modernized in 1930–35 and again in 1937–41, with improvements to her armor and machinery and a rebuilt superstructure in the pagoda mast style. With only 14-inch guns, she was outclassed by other Japanese battleships at the beginning of World War II, and played auxiliary roles for most of the war.

Fusō was part of Vice-Admiral Shōji Nishimura's Southern Force at the Battle of Leyte Gulf. She was sunk in the early hours of 25 October 1944 by torpedoes and naval gunfire during the Battle of Surigao Strait. Some reports claimed that Fusō broke in half, and that both halves remained afloat and burning for an hour, but according to survivors' accounts, the ship sank after 40 minutes of flooding. Of the few dozen crewmen who escaped, only 10 survived to return to Japan.

Ships of Japan
Battleships
Retrieved from "http://wiki.wargaming.net/en/index.php?title=Ship:Fuso&oldid=317259"
Categories:
Your location:
To log in, select the region where your account is registered
CIS Europe North America Asia
Or use Microsoft Login to enter WoT XBOX ecosystem
Log in