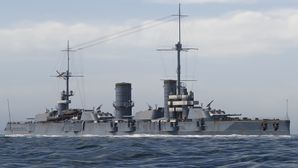 The research path of Gangut is relatively simple – players are encouraged to first unlock the (B) hull to increase ship health, anti-aircraft armament, and rudder response time, and finish with the fire control upgrade, which allows for a 10% firing range upgrade.

The recommended upgrades for Gangut are as follows:

Keep in mind that while the damage control team is very efficient, it can be used a limited number of times before becoming exhausted.

The lead ship or last member of her class depending on who you ask (the class is known as the Sevestapol-class in Russia, and Gangut-class abroad), Gangut was officially laid down on 16 June 1909 at the Admiralty Shipyards in Saint Petersburg. Work on the ship did not begin until the fall due to the designs not being complete, and even then construction was rather slow as funding was not allocated to the construction of these ships until May of 1911. Gangut had the misfortunate of being the last of her sisters to be launched, later that year. Her luck early in life was not great, and after completion she collided with one of her sisters, delaying her trials by almost two months. However after brief trials, on 11 January 1915 she was commissioned into the Imperial Russian Navy.

Like her sisters, Gangut was sent to Helsingfors (Helsinki) and became part of the First Battleship Brigade, composed of the four Sevestapol-class dreadnought battleships. The most powerful formation in the Russian Navy, it was not particularly active as even after commissioning the Russian dreadnoughts were still not quite ready for combat. The first combat mission of Gangut came on 27 August 1915, where she and Sevestapol provided distant cover for a mine laying operation off the southwest coast of Latvia. In September she suffered minor damage after running aground and later that year, on 1 November, she suffered a mutiny due to her crew not receiving the expected meat & macaroni after coaling (an extremely labor-intensive task). 10 days later she conducted another distant cover operation for another mine laying mission with her sister Petropavlovsk, her last major operation of the war. She sat idle in port until the mutiny of the Baltic fleet on 16 March 1917, which her sailors joined – ultimately resulting in the deaths of some 50 officers, including the fleet admiral.

After the defeat of Russia in the Great War and the Treaty of Brest-Litovsk, the Baltic fleet was forced to leave their haunt, which now belonged to the new nation of Finland. Gangut and the other dreadnoughts formed the vanguard of the Russian ships leaving the port on 12 March 1918, reaching the main Baltic naval base of Kronsthadt after five days. Their path was cleared by icebreakers, due to much of the Baltic being frozen at this time of the year, and thus the evacuation became known as the ‘Ice Cruise of the Baltic Fleet’.

With the Russian Civil War in full swing, most of the Baltic fleet was short on crew, and thus many of it’s ships were laid up – including Gangut in November 1918. The remains of the Baltic fleet continued to be wracked by the trauma of the revolution, culminating in the Kronsthadt revolution that effectively ended it. It was not until the mid-1920s that anyone paid Gangut attention again, and during a minor refit, on 27 June 1925, she was re-named Oktyabrskaya Revolutsiya. Oktyabrskaya Revolutsiya was commissioned into the Soviet Navy on 23 March 1926. On 12 October 1931 she began a three-year reconstruction which extensively upgraded the ship, replacing all of her boilers and installing new turbines, fitting a new clipper bow, upgraded anti-aircraft armament, and also giving a total overhaul to her fire control equipment, the Geisler-Pollen system was replaced, due to the lack of readiness of the new Soviet computer (APKN), by a Vickers computer (AKUR). Galileo 8-meter stereoscopic rangefinders were placed in the turrets, while two KDP-6 directors each with two DM-6 6-meter stereoscopic rangefinders were fitted aloft. Overall, her displacement increased, but the addition of so much top weight resulted in decreased stability.

After her modernization was completed on 4 August 1934, her life consisted of little more than time at anchor and the odd exercise, until the Winter War, which began in November of 1939. She and her sister Marat (ex-Petropavlovsk) bombarded Finnish coastal fortifications and shore batteries, but were driven off by coastal artillery before significant damage could be done. The Baltic waters froze over soon after that effectively the involvement of Oktyabrskaya Revolutsiya in the Winter War. Oktyabrskaya Revolutsiya was also involved in operations against the Baltic states as Soviet Russia took advantage of German aggression in the west to invade, entering the port of Tallinn after the Red Army seized Estonia. She was sent back to Kronshtadt for a minor anti-aircraft armament upgrade, and after completion was sent back to Tallinn.

When the Third Reich invaded the Soviet Union on 22 June 1941, Oktyabrskaya Revolutsiya was still in Tallinn, but fled shortly after to Kronshtadt once again. By late 1941 she as lending fire support to Soviet forces trying to prevent German forces from reaching Leningrad, and even landed some of her secondary battery guns to aid in the defense. On 21 September she took three bomb hits that disabled her two forward main battery turrets and damaged her bows, and she was send for repairs in yards at Leningrad on 23 October. Efforts to increase her anti-aircraft armament were made, but before repairs could be completed she was damaged by four bombs in an air raid on 4 April 1942, and another three hits were suffered on 24 April. Finally, repairs were completed in November, and she went back to providing fire support for the besieged city. When the 872-day siege broke in January of 1944, she provided fire support for Soviet offensives as the began to push west, particularly during the Karelian campaign. For her actions, on 22 July 1944 she received the Order of the Red banner.

For all her service, however, the usefulness of Oktyabrskaya Revolutsiya came to an end, and she was after all a thoroughly obsolete design. As a result, for a 10-year period from 1944 to 1954 she languished at anchor until being re-rated as a static training ship on 24 July 1954, with its engines dismantled, until being stricken on 17 February 1956. Towed to Kronshtadt, she was scrapped, the job being completed in 1959 (although the ship’s anchors and some anti-aircraft guns exist as monuments at Anchor Square in Kronshtadt today).

Ships of U.S.S.R.
Battleships
Retrieved from "http://wiki.wargaming.net/en/index.php?title=Ship:Gangut&oldid=322775"
Categories:
Your location:
To log in, select the region where your account is registered
CIS Europe North America Asia
Or use Microsoft Login to enter WoT XBOX ecosystem
Log in