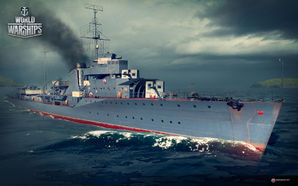 This ship was generally successful and combined a high speed, reasonably good torpedo armament, and very powerful artillery. The destroyer's main guns were superior in firepower and range to most foreign counterparts. Weak AA defenses were a significant drawback of her design.

Gremyashchy was first sold in pre-order bundles from 8 April through 25 June 2015. She has not been sold since.

Commonly referred to as the "Gremy" (a shortening of its name), Gremyashchy is interesting when it comes to destroyers. It has fantastic gun range (nearly 12km) and also has the advantage of having a 1km buffer between its max torpedo range and concealment so it can launch torpedoes from stealth much like Japanese destroyers. Also similar to Japanese destroyers, Gremyashchy suffers from very slow turret traverse speeds making it less than ideal for close quarter brawls. However, its rate of fire and flat shell arcs are more than enough to enable it to fight off other destroyers with relative ease. Play her like a ranged gunboat, and she will do quite well with her 12 round per minute guns.

As a premium ship, Gremyashchy doesn't have any upgrades to research.

The recommended upgrades for Gremyashchy are as follows:

Gremyashchy plays almost exactly like Gnevny, her tech tree cousin. Commander skills on both ships will have the same focus: maximizing the usefulness of her main battery and improving her survivability. The latter is best accomplished by attempting to preserve her engine functionality (Last Stand) and health pool (Survivability Expert).

Gremyashchy can equip the following consumables:

As a premium ship, Gremyashchy comes with Default permanent camouflage and a set of permanent combat bonuses.

Gremyashchy (Russian: Гремящий; "thunderous") was a Gnevny-class destroyer in service within the Soviet Navy launched on 12 March 1937 at the Zhdanov Yard in Leningrad. Construction began on 23 July 1936, and the destroyer began operations within the Baltic Fleet on 28 August 1939, while later being transferred to the Soviet Northern Fleet in 1941

Ships of U.S.S.R.
Destroyers
Retrieved from "http://wiki.wargaming.net/en/index.php?title=Ship:Gremyashchy&oldid=319712"
Categories:
Your location:
To log in, select the region where your account is registered
CIS Europe North America Asia
Or use Microsoft Login to enter WoT XBOX ecosystem
Log in