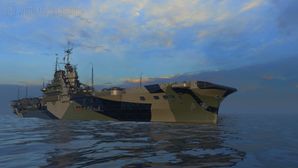 The last ship from the Illustrious-class carriers, which represented a revolutionary breakthrough in the development of aircraft carriers thanks to the introduction of an armored flight deck. In contrast to the lead ship, she had an additional hanger and so could carry more aircraft.

Indomitable joins the Royal Navy in World of Warships as its first premium Tier VIII aircraft carrier, bringing with her a very unique playstyle. Her most striking difference from Implacable, her tech tree counterpart, is a lack of torpedo bombers, forcing Indomitable captains to double down on her attack aircraft and level bombers. As a result, Indomitable is a very situational aircraft carrier, and must choose her targets carefully.

Indomitable’s attack aircraft have several differences with Implacable’s. While her payloads deal less total damage, Indomitable’s attack aircraft are considerably faster, cruising at a base speed of 188 knots and 228 knots with boost, allowing her to react much more quickly to opportunities and strike destroyers. Furthermore, the enhanced speed allows Indomitable to offset her increased plane regeneration time: 115 seconds without upgrades or captain skills.

At 13.5km base detection range, Indomitable is also stealthier than her tech tree equivalent. With the Hidden Menace captain skill and Concealment System Modification 1, she can reach 10km of sea detection range, allowing her to reposition much more easily and stay closer to the battle. Additionally, each of Indomitable’s plane types carry 4 charges of the Patrol Fighters consumable, decreasing the number of times squadron commanders may find themselves out of fighters on a specific plane type.

As a premium ship, Indomitable doesn't have any upgrades to research.

The recommended upgrades for Indomitable are as follows:

Like other aircraft carriers, the captain of Indomitable does not control the ship's consumables.

As a premium ship, Indomitable comes with Default permanent camouflage and a set of permanent combat bonuses.

HMS Indomitable (pennant number 92) was a modified Illustrious-class aircraft carrier of the Royal Navy. The Illustrious class was developed in the 1937 Naval Programme. Originally planned to be the fourth of the class, she was redesigned to enable her to operate more aircraft, 48 instead of 36. A second hangar was added above the original, raising the flight deck by 14 feet (4.3 m), although the hangar side armour had to be reduced to compensate. The lower hangar was made shorter than the upper hangar due to the need for extra workshops and accommodation to support the added aircraft.

Ships of U.K.
Aircraft Carriers
Retrieved from "http://wiki.wargaming.net/en/index.php?title=Ship:Indomitable&oldid=325059"
Categories:
Your location:
To log in, select the region where your account is registered
CIS Europe North America Asia
Or use Microsoft Login to enter WoT XBOX ecosystem
Log in