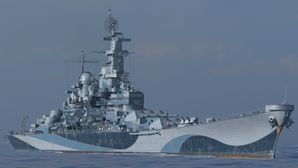 One of the most powerful battleships of World War II. The ship was designed for escorting attack carrier forces. She surpassed the speed of all battleships in the world. The battleship's survivability was significantly improved owing to a novel and powerful torpedo protection system and a fundamentally different armor protection system featuring an internal armor belt.

The historical counterpart of the famed battleship Yamato, Tier IX's Iowa is the pinnacle of the various fast battleship designs the United States commissioned into service before and during World War II.

Veterans of North Carolina will be well-familiar with how Iowa plays, as both ships are laid out in an identical AB-X turret arrangement. The key differences are found in Iowa’s handling — she is faster, with a larger turning circle and slower rudder shift speed — slightly improved AA suite, and longer main battery rifles. Iowa’s barrels are 50 caliber (as opposed to North Carolina’s 45 caliber barrels) and the improvement in the velocity of her armor-piercing shells is notable. Her AP shells get on target faster, and new Iowa captains should allow a few games to learn how to adjust leading their shots accordingly. Additionally, she gains access to Artillery Plotting Room Modification 2

, which provides a significant reduction to her dispersion.

Exposing her flat broadside to enemies is as inadvisable in Iowa as it is in most battleships. Even though her citadel is at the ship's third deck at roughly waterline height, the third deck plating can be overmatched by every battleship in her matchmaking spread. Consequently, Iowa can be dealt catastrophic damage by well-aimed AP shells. Careful positioning and good situational awareness are required at all times to ensure she isn't removed from the game in a single enemy salvo, and this vulnerability makes fighting at close ranges very tricky as her overall length is more of a liability than an asset.

Once mastered, however, Iowa’s capabilities are unmatched by just about any battleship in game. She combines speed, firepower, and survivability in a way that is unrivaled by any other ship in her tier and below. Her mobility allows her to get to where she is needed, her powerful super-heavy shells allow her to inflict significant damage on whatever she encounters there, and her armor allows her to tank punishment provided she doesn't expose her broadside or get blindsided by incoming torpedoes.

The researchable upgrades are, in priority order:

Investing experience into Hull (B) is a top priority; it brings additional hit points and a large bump to Iowa’s anti-aircraft capabilities. The Propulsion module upgrade should come next, with the Fire Control System upgrade saved for last.

There are two ways to build to Iowa's strengths: a mid-range, support or anchor build, and a closer-range brawling or flanker build.

The anchor build is more suited to a play style that holds the ship in open water at mid-range where accuracy is valued over quick reaction. For this build, the two Artillery Plotting Room upgrades are paired. APRM1 provides longer main battery range plus a non-insignificant buff to her secondary battery; APRM2 gives a significant buff to her main battery dispersion, increasing her effectiveness at the longer range shots that this play style generates.

The flanker build takes advantage of Iowa's speed to establish her on a flank, often using terrain, while knocking off enemies as they attempt to cap or push the flank, and later possibly pushing to turn the flank and set up crossfires. For this build, the Main Battery upgrades are paired — MBM2 to offset the penalty of MBM3, and MBM3 to significantly boost her damage-per-minute. The base dispersion is accepted as most targets will be at relatively close range.

Other builds, such as Pure Tank, Secondary, or AA builds, are not recommended as they offer less value for the investment.

The recommended upgrades for Iowa are as follows:

Re: Slot 4, neither Propulsion Modification 1

are bad choices. Iowa doesn't turn or accelerate particularly well. PM1 will help her reposition when it's time to get out of Dodge,[1] and SGM1 will help to dodge incoming, usually torpedoes. So this slot is essentially Captain's Choice.
Re: Slot 5, maximizing stealth is never a bad choice. However, battleships are not invisible, especially when they open fire with those awesome rifles. Consider Torpedo Lookout System

Iowa can equip the following consumables:

With the emergence of aircraft carriers and the need to protect them from surface threats, the concept of “fast battleships” came into prominence; ships designed with the speed and the endurance to keep pace with carrier groups and serve as a major deterrent to surface attack. To fulfill this role, the design called for a top speed of 33 knots from 8 boilers connected to 4 turbines; each turbine to a propeller shaft. This layout produced a total of 230,000 shaft horsepower. Furthermore, the ship had a greater waterline length-to-beam ratio, making the ship longer than its predecessors, as well as notably faster.

The main armament of the Iowa class — while using rifles of the same diameter of 406mm as preceding ships — were longer than the rifles on the South Dakota-class (increased from 45 calibers to 50 calibers) and therefore have the distinction of being the largest rifles mounted on any US warship to date. This increase in rifle length resulted in greater distance for expanding gases in the chamber to propel the projectile, which equated to higher muzzle velocity, greater range, and greater armor-penetration capabilities than preceding rifles. Furthermore, the Iowa-class had a comprehensive suite of secondary and anti-aircraft guns due to the design emphasis of increased protection against air attacks; the armament systems were supplemented with state-of-the-art radar-based fire control systems (Iowa had Mark 8 Fire Control Radar sets fixed upon Mark 38 Fire directors).

The Iowa-class battleships had the characteristic “all-or-nothing” armor scheme seen in preceding American battleships, with the thickest armor around the citadel between Turrets A and Turret C. The outer hull plate was 38mm Special Treatment Steel (STS) and the side armor of 307mm was angled at 19-degrees inwards in order to confer greater armor thickness for little additional weight; this was especially advantageous against shells at longer range. The weather deck was 38mm STS, the main armor deck was 152mm STS/Class B, and the splinter deck was 25mm over the magazines and 16mm over machinery spaces. The hull has a triple bottom under the citadel to protect against underbottom explosions. The armor scheme of the Iowa-class was largely the same as the preceding South Dakota-class, which offered protection from 406mm/45 rifles firing 1,016 kg Mark 5 shells from ranges between 16,000 - 27,000 meters.

From the onset, Iowa was designed to fulfill the role of a fleet flagship; therefore, the conning tower was more enlarged than those of her sisters, to accommodate an admiral on board. Iowa was, therefore, the ideal choice when selecting which ship should ferry President Franklin D. Roosevelt to the Tehran Conference of 1943.

USS Iowa was the lead ship of the Iowa-class battleships. Ordered at the Brooklyn Navy Yard in New York City, she was laid down on 27 June 1940, launched on 27 August 1942, and commissioned into service on 22 February 1943.

The Iowa-class battleships were a class of fast battleships ordered by the United States Navy in 1939 and 1940 to escort the Fast Carrier Task Forces that would operate in the Pacific Theater of World War II. Four were completed; two more were laid down but canceled at war's end and scrapped. Like other third-generation American battleships, the Iowa class followed the design pattern set forth in the preceding North Carolina-class and South Dakota-class battleships, which emphasized speed and the secondary and anti-aircraft batteries.

A rare tech tree ship review from LittleWhiteMouse: Iowa from the NA Forums

Ships of U.S.A.
Battleships
Retrieved from "http://wiki.wargaming.net/en/index.php?title=Ship:Iowa&oldid=325213"
Categories:
Your location:
To log in, select the region where your account is registered
CIS Europe North America Asia
Or use Microsoft Login to enter WoT XBOX ecosystem
Log in