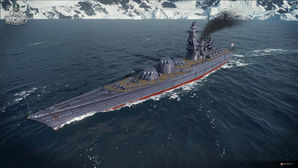 One of the draft designs for a "super battleship" concept, preceding the appearance of the Yamato-class battleships. This design featured heavy armor and a sufficiently high speed complemented by powerful main battery guns that were unconventionally placed in three turrets located at the ship's front end.

Once considered by many to be among the worst Tier IX ships in the game, Izumo has seen a variety of improvements since the launch of World of Warships. While her stock hull still has mediocre secondaries, a weak anti-aircraft battery, and bad turning characteristics, the AP shell penetration of Hull (A) has been significantly improved, allowing her guns (at least) to remain competitive against the likes of Iowa and Friedrich der Große beyond 15km. The central weather deck was increased to 57mm to mitigate damage from high explosive shells from 203mm and IFHE 152mm guns. The concealment, once among the worst of any ship in the game, has been considerably improved, though still on the lower end of the spectrum for Tier IX battleships.

Izumo’s armor on her sharply-angled bow can deflect most AP shells fired at the hull, save for ships whose guns can overmatch 32mm bow plating. Once Hull (B) is unlocked, she gains somewhat better secondaries and AA. While the middle weather deck was buffed, she remains vulnerable to full penetration damage from high explosive shells in upper belt, bow, and stern and the fully upgraded AA suite is not adequate enough to fend off air attacks, even with support from allies. Pointing her bow at enemies and reversing at mid range — similar to how many captains play Dunkerque, Iowa, and North Carolina — is a valid tactic in Izumo, and is quite effective against enemy AP rounds. Like all high tier battleships, she remains vulnerable to fire.

Unlocking and investing in both hull upgrades will greatly improve Izumo’s handling and performance. With those out of the way, either of the remaining modules can be improved in whichever order suits individual captains as they are relatively minor buffs.

The recommended upgrades for Izumo are as follows:

Because of the limited field of fire of Izumo's secondary batteries, a secondary build is not recommended.

is worth serious consideration to speed the glacial turret rotation. To increase the effectiveness of the anti-aircraft armament, mount AA Guns Modification 1

Slot 6 gives players options to finalize their build. For gunnery, mount Main Battery Modification 3 to decrease the reload time of the main battery at the cost of turret rotation. Auxiliary Armaments Modification 2

improves the effectiveness of both secondaries and AA.

Players can equip the following consumables on Izumo:

Izumo comes with 21 signal flag slots. The three most important flags are India Delta, Juliet Yankee Bissotwo and India Yankee; all of which will improve your survivability. If the captain goes with the Secondary Build, the addition of Mike Yankee Soxisix will further improve the performance of Izumo’s secondaries.

Izumo (出雲 "Outward Cloud" named for the Izumo province) in game was the A-140-J2, one of the alternate design proposals in the project that would result in the famous Yamato-class. In 1936, after Japan had left the League of Nations and renounced the Washington Naval Treaty, the Imperial Japanese Navy contacted leading naval engineer Yuzuru Hiraga to design a new battleship not bound by treaty limits. Hiraga drew experience from designing the Yubari, Fubuki, and Mogami classes to help him design the new battleship, designated A-140. In all, 24 preliminary designs were submitted to Naval Command for review, with varying turret configurations and endurance. The A-140-J series designs were notable in that they were the only ones to mount 41 cm guns, as opposed to the "Type 94" guns that were in reality 46 cm caliber; the design of these ships were more mindful of the existing docks and slipways in Japan at the time. The A-140-J2 has a turret configuration similar to the HMS Nelson and had a hybrid engine concept. However, due to advancements in fire-control methods and the failures of hybrid-engines in the submarine tender Taigei and the seaplane tender Mizuho, the plans were scrapped in favor of Hiraga’s 18-inch armed conventional layout, which would later become Yamato.

The design, known as A-140-J2, was never built and therefore never named; the in-game name was given to the ship by Wargaming in accordance with the Imperial Japanese tradition to name battleships after provinces of Japan. There have been two real Izumos: the IJN Izumo was an armored cruiser built at the end of the 19th century that served in the Imperial Japanese Navy until 1945 and the JS Izumo which is a helicopter destroyer currently in the service of the Japan Maritime Self-Defense Force.

Ships of Japan
Battleships
Retrieved from "http://wiki.wargaming.net/en/index.php?title=Ship:Izumo&oldid=318982"
Categories:
Your location:
To log in, select the region where your account is registered
CIS Europe North America Asia
Or use Microsoft Login to enter WoT XBOX ecosystem
Log in