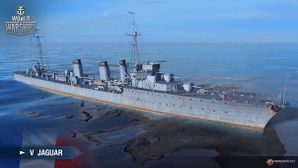 An ancestor of a sub-type of large destroyers (French "contre-torpilleurs") that were fast-moving ships, their speed being typical of the French Navy. In contrast to destroyers of that time, these ships had large dimensions and powerful artillery armament.

Tier V is an incredibly diverse tier for battleships, cruisers, and destroyers. No other tier can have within its ranks the Kamikaze sisters, Gremyashchy, and Okhotnik or boast greater variety among its destroyers than, possibly, Tier VIII. As such, it speaks to Jaguar's strengths that she can stand out among her peers. No other ship has even close to the 16,600 HP on Jaguar's researchable hull. Nicholas comes in a distant second with her 13,100 HP on Hull B.

Jaguar's armament is a pedestrian upgrade over her predecessor. She equips the same guns, just 5 of them instead of 4, and slightly improved torpedoes. Jaguar's turret angles are slightly wider than her predecessor's, though firing a full salvo still requires exposing considerable broadside. At Tier V, competition from artillery-focused destroyers increases. Notably, Hill also has 5 guns with a similar damage per shell, though each reloads in just 75% of the time. To stay alive and maintain her influence throughout an entire game, captains must learn to stay at range and occasionally let allies do the spotting. While her high health pool affords her the capacity to sustain some extra blows, Jaguar cannot win every destroyer duel with guns alone. Furthermore, Jaguar's high detectability range and lack of smoke puts captains at a disadvantage when they need to disengage.

As far as torpedoes go, Jaguar's are on par or better than even the infamous Kamikaze clones' in maximum damage, speed, and range. Every opportunity to launch her fish is an opportunity to terrorize the enemy, though such opportunities are limited by a 90 second reload time. Jaguar's 8 km torpedo range and 68 knot speed are second to none and only Jianwei's researchable deep water torpedoes can deal more damage. Another positive is Jaguar's ability to stealth torp, which allows her to deliver devastating strikes from the safety of the shadows. Captains should keep in mind that Jaguar's torpedo angles are more limited than that of most Tier V destroyers, especially towards the bow.

Tier V comes with more competition whereas Tier VI comes with a boost in the form of Main Battery Reload Booster. This places Jaguar in a weird position where some players likely will only play her so they can stop playing her. Jaguar is more difficult to play than Bourrasque because of the diverse composition and opposition at Tier V. Her ability to take extra hits is welcome, though this may not be obvious when trading blows, during which dealing damage often comes first. Barring impulsive moves that force her into the early crossfire, her appreciable armament can stay in play for a full 20 minutes. When played well by captains unabashed by staying a bit behind the front-line, Jaguar is very effective.

Availability of researchable upgrades for Jaguar is as follows:

It is recommended for captains to first research the Hull upgrade for an additional 3,800 HP on Jaguar. Captains may decide to then proceed immediately to the next ship on the tech tree, Guépard. Alternatively, captains may research the PCA n° 5 Mle 2 upgrade for a 10% increase to Jaguar's already large main battery range.

Unlike the French cruisers, the French DDs don't seem especially apt to lose their steering or propulsion.

can be equipped to increase Jaguar's torpedo speed by 3.4 knots to 71.4 knots.

The French destroyer Jaguar was a Jaguar-class destroyer (contre-torpilleur) built for the French Navy during the 1920s. She spent most of her pre-World War II career as a flagship for various destroyer units. The ship was assigned convoy escort duties in the Atlantic after the start of the World War II in September 1939 until she was badly damaged during a collision in January 1940. Five months later, after her repairs were completed, she was committed to the English Channel after the Battle of France began in May 1940. Jaguar was torpedoed by German E-boats on 23 May and had to beach herself; her wreck was written off as irreparable.

Alongside the Projet 1920 torpilleurs d’escadre, another type of design was also drawn up – a contre-torpilleur (destroyer hunter). These ships were designed explicitly for the purpose of countering the Italian esploratori leggeri, and the initial design was much larger than the standard fleet destroyer – a 1,780-tonne ship with five 100mm guns and a higher top speed of 35.5 knots. As with the Projet 1920, the inferiority of the 100mm gun compared to the weapons used by their foreign counterparts lead to the contre-torpilleur being re-designed to use the same 130mm/40 Mle 1919 as the Bourrasque-class. The estimated displacement growth for the move to 130mm guns lead to the design becoming a 2,360-tonner, and at full load the ships were about 3,000 tonnes.

The new draft for the contre-torpilleur project, as of April 1921, called for a design output of 50,000 shp, in order to maintain the targeted top speed of 35.5 knits (versus 38,000 shp from the 1920 design), with the target for cruising range remaining the same as well (3,000 nm at 15 knots). The price of the high speed was high – five boilers operating at 18 kg/cm2/216°C and two turbine groups, which took up half the length of the ship and over a third of its displacement. Most of the ships were able to attain near their design speed on their trials (around 34.5 knots), however this was at a load only slightly greater than their normal tonnage, and with power overload. At full load and normal power their top speed was considerably less, closer to 30 knots.

Their main armament utilized the same 130mm/40 Mle 1919 as the Bourrasque-class, albeit with a fifth gun amidships (although this gun was not fed directly by a magazine, and only had 30 ready rounds available before it would have to cease action). Although a powerful gun firing a heavier projectile than any other naval rifle in service aboard foreign destroyers, rate of fire and effective range (4-5 rpm and about 12,000 meters) were rather low and limited their effectiveness. Additionally, the ships had too much topweight and thus the planned Mle 1923B fire control computer could not be installed – instead a simple Mle 1919 Aviso calculator was used in conjunction with a 3-meter coincidence rangefinder until later in their career. Anti-aircraft defense was provided by two 75mm/50 Mle 1924, and two 8mm machine guns. Fire control was limited to on-mount sights.

Overall, the Jaguar-class was a landmark in destroyer design, on being the largest and most powerful ships of their type when commissioned. However, much of their strength existed only on paper, as their top speed was considerably less than advertised, the main armament not as powerful as the caliber suggested, and the ships suffered from serious stability issues that hampered their operations (gunnery in particular). The Marine Nationale sought to address these issues in their future ships.

Six Chacal-class destroyers were placed in commission during 1926-27. All but Tigre were lost in WWII.

Jaguar herself was torpedoed by a German E-boat near Dunkirk, 23 May 1940, then beached and wrecked.

Ships of France
Destroyers
Retrieved from "http://wiki.wargaming.net/en/index.php?title=Ship:Jaguar&oldid=318527"
Categories:
Your location:
To log in, select the region where your account is registered
CIS Europe North America Asia
Or use Microsoft Login to enter WoT XBOX ecosystem
Log in