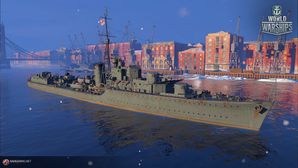 Perhaps one of Jervis’ best assets is the power of her gunnery at medium to close range, especially when she's aggressively charging enemy ships. It is trivially easy for the player to bring all six guns to bear, even when rapidly switching from side to side, and combined with her high rate of fire, this allows her to quickly pummel enemy destroyers, gaining an early advantage in a fight even against enemy destroyers able to bring to bear their full armament. Her massive quantity of torpedoes also allows her to put a staggering number of torpedoes into the water at once. Her ability to utilize Short-Range Hydro-Acoustic Search

allows her to be safer when charging enemy smokescreens (or utilizing her own) with the earlier detection of torpedoes — although her Hydro is inferior to those of German destroyers, so it should not be relied upon to spot enemy ships. 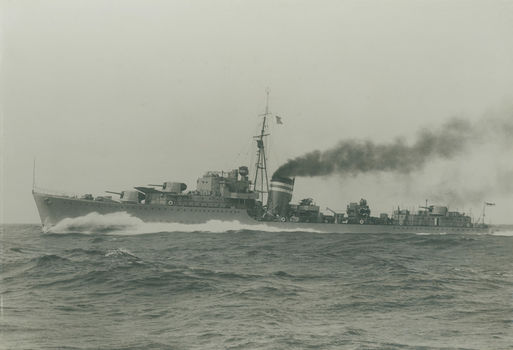 Ships of U.K.
Destroyers
Retrieved from "http://wiki.wargaming.net/en/index.php?title=Ship:Jervis&oldid=318904"
Categories:
Your location:
To log in, select the region where your account is registered
CIS Europe North America Asia
Or use Microsoft Login to enter WoT XBOX ecosystem
Log in