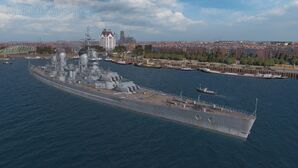 A smaller version of a Project 1047 battlecruiser armed with 240 mm main battery guns.

The Johan De Witt is a pretty good allrounder with its Airstrike, Hydro, and Defensive AA consumable. The Armor of this ship is pretty decent with a turtleback. Her good concealment allows her to get close and personal to enemy cruisers.

This ship is pretty good at tanking and kiting. Thanks to its good icebreaker you can bounce shells from most high-caliber guns. When kiting away the long-range can help you dodge shots.

Because of its weak armor (Deck 30 mm), The De Witt is pretty vulnerable against high explosive shells which exceed 30mm penetration. Also, you are going to get a lot of overpenetration when kiting away because of the 27 mm Side Plating.

The guns are at their best mediocre. These are basically German guns that spread a lot. So most of the time you will be using HE. the fire chance is 20%. The AP deals a considerable amount of damage. Sadly the guns aren't that accurate so you will be only shooting AP when there is a broadsiding target in front of you.

Availability of researchable upgrades for Johan de Witt is as follows:

The recommended upgrades for Johan de Witt are as follows:

Johan de Witt is a Wargaming-fabricated design roughly inspired by Project 1047. Johan de Witt was the Prime Minister of the Holland from 1653-1672, At the end of which he was beaten to death and they ate him.

No ship in the Royal Netherlands Navy was named Johan de Witt before 2003.

Ships of Netherlands
Cruisers
Retrieved from "http://wiki.wargaming.net/en/index.php?title=Ship:Johan_de_Witt&oldid=319498"
Categories:
Your location:
To log in, select the region where your account is registered
CIS Europe North America Asia
Or use Microsoft Login to enter WoT XBOX ecosystem
Log in