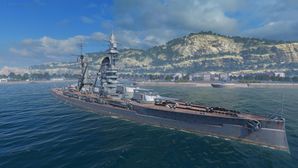 The warship was developed from the Kaiser-class battleships. She inherited her predecessors' very powerful armor. The main turrets were arranged in a more rational manner that allowed the ship to fire a broadside with all main battery guns.

König is a decent Tier V battleship with the sloping "turtleback" armor protecting the citadel of the ship. Bow on, König can take a significant amount of armor piercing fire, but doing this means that only four of the ten guns can fire at the enemy. However, even with the good armor, König will succumb to sustained concentrated fire. The guns are decent, but do, in some aspects, leave a bit to be desired, especially against battleships, as the guns have a low caliber. The guns are still perfectly serviceable against cruisers, however. The lower caliber prevent over-penetrations in some cases, which makes König an effective cruiser killer. The high shell speed of the guns and the good accuracy for a German battleship mean that König is also good at longer ranges, a contrast to Kaiser before her.

The secondary armament is comprehensive and will discourage most destroyers from getting close to König as well as coming in handy in close quarters fights with another battleship. The anti-aircraft suite is serviceable as well. With the C hull, torpedo or dive bomber squadrons may lose some planes, but the AA suite is not able to fend off an entire carrier attack.

The concealment is, for a battleship, rather good with a 14.6km detection range, the stealthiest of any of the Tier V battleships. This does give her a bit of flexibility when re-positioning. The maneuverability of König is rather poor as the acceleration and rudder shift are very slow. The top speed is decent at 24 knots.

in Slot 3 to boost her secondaries' range.

König can equip the following consumables:

SMS König was the first of four König-class dreadnought battleships of the Imperial German Navy (Kaiserliche Marine) during World War I. König (Eng: "King") was named in honor of King William II of Württemberg. Laid down in October 1911, the ship was launched on 1 March 1913. Final construction on König was completed shortly after the outbreak of World War I; she was commissioned into the High Seas Fleet on 9 August 1914.

Along with her three sister ships, Groβer Kurfürst, Markgraf, and Kronprinz, König took part in most of the fleet actions during the war. As the leading ship in the German line on 31 May 1916 in the Battle of Jutland, König was heavily engaged by several British battleships and suffered ten large-caliber shell hits. In October 1917, she forced the Russian pre-dreadnought battleship Slava to scuttle herself in the Battle of Moon Sound, which followed Germany's successful Operation Albion.

König was interned, along with the majority of the High Seas Fleet, in Scapa Flow in November 1918 following the Armistice. On 21 June 1919, Rear Admiral Ludwig von Reuter gave the order to scuttle the fleet, including König, while the British guard ships were out of the harbor on exercises. Unlike most of the scuttled ships, König was never raised for scrapping; the wreck is still on the bottom of the bay.

Ships of Germany
Battleships
Retrieved from "http://wiki.wargaming.net/en/index.php?title=Ship:König&oldid=322002"
Categories:
Your location:
To log in, select the region where your account is registered
CIS Europe North America Asia
Or use Microsoft Login to enter WoT XBOX ecosystem
Log in