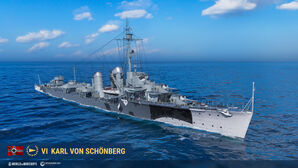 A design for a "1934-type" destroyer. The ship was relatively large for her type and featured very powerful artillery armament comprising 150 mm cruiser-caliber guns.

Karl von Schönberg was first released for sale on 04 Nov 2021.

The most striking difference between these two ships is that Karl von Schönberg is more focused on gun performance, while compromising in other fields. As a result, Karl von Schönberg can only equip the stock torpedoes of Ernst Gaede and lacks the Hydroacoustic Search

The rest of the characteristics remain the same, so Karl von Schönberg inherits the high hitpool of Ernst Gaede for the ability to take some hits, as well as decent forward firing angles. Furthermore, she is slow compared to the competition, and just like her counterpart has no real means of defending herself against aircraft beyond seeking cover in her smoke screens.

Karl von Schönberg should be played at some distance, making use of the improved gun performance while not putting itself at risks that the Hydroacoustic Search consumable might help mitigate. Preferred targets are soft skinned cruisers showing their broadside, while efforts should be taken to avoid engaging destroyers in head to head duels. Aircraft carriers are especially dangerous to Karl von Schönberg due to the lack of effective AA armament.

As a premium ship, Karl von Schönberg has no module upgrades to research.

As a premium ship, Karl von Schönberg comes with Default permanent camouflage and a set of permanent combat bonuses.

After World War 1 the German Navy started planning for new destroyers in 1932. While the majority of designs and proposels were made by official sites, private companies also attempted to design the first generation of German Destroyers. One of these drafts came from the AG Vulcan Stettin, which was located in Hamburg. This design allowed an armament of four single mounted 128mm or 150mm guns and two Torpedo launchers, either in triple or quadruple mountings.

However, in 1933 it was decided that the Destroyer should have two quadruple Torpedo launchers and a fifth gun mount. As the latter requirement could not be met with this design, it was dropped and no longer considered.

Ships of Germany
Destroyers
Retrieved from "http://wiki.wargaming.net/en/index.php?title=Ship:Karl_von_Schönberg&oldid=321034"
Categories:
Your location:
To log in, select the region where your account is registered
CIS Europe North America Asia
Or use Microsoft Login to enter WoT XBOX ecosystem
Log in