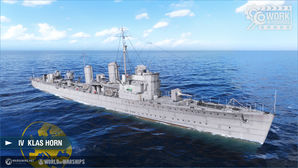 A "standard" Swedish destroyer, commissioned as part of one of several ongoing series of destroyers that commenced in the late 1920s. The features that all the ships of this series shared were their high speeds, 120 mm Bofors main guns, and 533 mm torpedo tubes.

Ships of Europe
Destroyers
Retrieved from "http://wiki.wargaming.net/en/index.php?title=Ship:Klas_Horn&oldid=296870"
Categories:
Your location:
To log in, select the region where your account is registered
CIS Europe North America Asia Republic of Korea
Or use Microsoft Login to enter WoT XBOX ecosystem
Log in