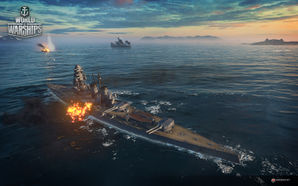 When she was commissioned, Kongo was the most advanced battlecruiser in the world. She was the first among battlecruisers and battleships to be equipped with 356 mm main battery guns. Unlike previous Japanese dreadnoughts, Kongo received a thinner armor belt while her deck armor and torpedo protection were reinforced.

Kongo is considered to be one of the most enjoyable battleships in the game, especially towards the lower tiers. Kongo has by far the highest top speed of the battleships of Tier V, a strong, solid main armament of eight 14-inch guns in four twin turrets, far greater range than her contemporaries, good secondaries, and the most health of her tier. However, she's not the strongest in all suites - she's got the worst armor of her tier, with only 203mm of belt armour compared to New York’s, Texas’ and König’s 356mm belt armor, and she has the least guns of her tier. These shortcomings, however, don't stop Kongo from being one of the most competitive battleships in the game tier-for-tier. Kongo must always be careful with how she positions herself; showing too much broadside to an enemy battleship can be a fatal mistake. Kongo excels at both ranged combat and can use her maneuverability to outdo enemy battleships at closer ranges. Kongo is the second of three battlecruisers/fast battleships in the Japanese battleship line, coming after Myogi and eventually leading to Amagi at Tier VIII.

Kongo is — effectively — a battlecruiser and needs to be able to dictate the terms of the engagement as she does not have a lot of armor. Upgrading her Propulsion module is first priority. After this, pick up Hull (B) for the upgraded main battery shells and a little bit faster turret traverse. The Fire Control System module upgrade can be saved for last.

The recommended upgrades for Kongō are as follows:

is recommended to provide additional survivability to the main battery, but players who desire to specialize in the secondary or anti-aircraft armament should choose Auxiliary Armaments Modification 1

is recommended because it reduces shell dispersion of the main and secondary armaments. To increase the effectiveness of the anti-aircraft armament, mount AA Guns Modification 1

Kongō can equip the following consumables:

), all of which will improve your survivability. Captains wishing to improve the performance of their secondary battery should consider the addition of Mike Yankee Soxisix ( 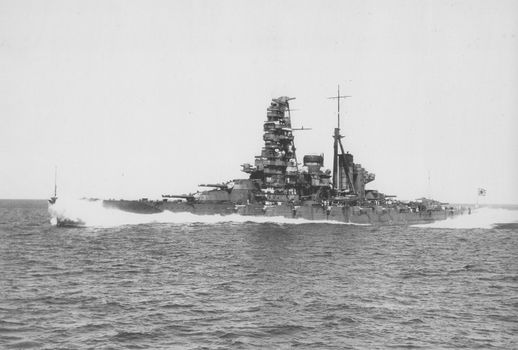 The Kongō-class battlecruiser (金剛型巡洋戦艦 Kongō-gata jun'yōsenkan) was a class of four battlecruisers built for the Imperial Japanese Navy (IJN) immediately before World War I. Designed by British naval architect George Thurston, the lead ship of the class, constructed in the UK by Vickers, was the last Japanese capital ship constructed outside Japan.

During the late 1920s, all but Hiei were reconstructed and reclassified as battleships. After the signing of the London Naval Treaty in 1930, Hiei was reconfigured as a training ship to avoid being scrapped. Following Japan's withdrawal from the London Naval Treaty, all four underwent a massive second reconstruction in the late 1930s. Following the completion of these modifications, which increased top speeds to over 30 knots (56 km/h; 35 mph), all four were reclassified as fast battleships.

The Kongō-class battleships were the most active capital ships of the Japanese Navy during World War II, participating in most major engagements of the war.

Kongō (金剛, "Indestructible", named for Mount Kongō) was a warship of the Imperial Japanese Navy during World War I and World War II. She was the first battlecruiser of the Kongō class, among the most heavily armed ships in any navy when built, and the last capital ship to be built outside Japan. Her designer was the British naval engineer George Thurston, and she was laid down in 1911 at Barrow-in-Furness in Britain by Vickers Shipbuilding Company. Kongō was the last Japanese capital ship constructed outside Japan. She was formally commissioned in 1913, and patrolled off the Chinese coast during World War I.


Kongō underwent two major reconstructions. Beginning in 1929, the Imperial Japanese Navy rebuilt her as a battleship, strengthening her armor and improving her speed and power capabilities. In 1935, her superstructure was completely rebuilt, her speed was increased, and she was equipped with launch catapults for floatplanes. Now fast enough to accompany Japan's growing carrier fleet, Kongō was reclassified as a fast battleship. During the Second Sino-Japanese War, Kongō operated off the coast of mainland China before being redeployed to the Third Battleship Division in 1941. In 1942, she sailed as part of the Southern Force in preparation for the Battle of Singapore.


Kongō fought in a large number of major naval actions of the Pacific War during World War II. She covered the Japanese Army's amphibious landings in British Malaya (part of present-day Malaysia) and the Dutch East Indies (now Indonesia) in 1942, before engaging American forces at the Battle of Midway and during the Guadalcanal Campaign. Throughout 1943, Kongō primarily remained at Truk Lagoon in the Caroline Islands, Kure Naval Base (near Hiroshima), Sasebo Naval Base (near Nagasaki), and Lingga Roads, and deployed several times in response to American aircraft carrier air raids on Japanese island bases scattered across the Pacific. The Kongō participated in the Battle of the Philippine Sea and the Battle of Leyte Gulf in 1944 (October 22–23), engaging and sinking American vessels in the latter. Kongō was torpedoed and sunk by the submarine USS Sealion while transiting the Formosa Strait on 21 November 1944. She was the only Japanese battleship sunk by submarine in the Second World War, and the last battleship sunk by submarine in history.

Ships of Japan
Battleships
Retrieved from "http://wiki.wargaming.net/en/index.php?title=Ship:Kongo&oldid=313073"
Categories:
Your location:
To log in, select the region where your account is registered
CIS Europe North America Asia Republic of Korea
Or use Microsoft Login to enter WoT XBOX ecosystem
Log in