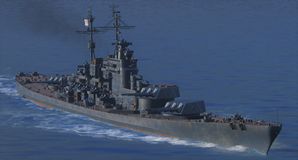 A battleship project developed at the end of World War II (Project 24). She was the evolution of the Sovetsky Soyuz-class ships and was designed to counter American Iowa-class and Montana-class battleships.

As the peak of the Russian battleship line, Kremlin is a very durable battleship with noticeably worse-than-for-tier main battery dispersion at long ranges and better-than-for-tier main battery dispersion at close ranges. Much like her predecessors, players will find her accuracy much more favorable when closing in on the enemy.

While it seems natural that one should close the distance on the enemy to increase one's combat efficiency with this ship, the fact that all of the other same tier battleships have access to much longer ranges than Kremlin, including some cruisers such as Henri IV, makes forward advances difficult and risky. However, thanks to her unique Damage Control Party (

), this makes forward advances much easier than with her peer battleships. But players should also note that there is only a limited number of the consumable available - running out of the consumable too quickly greatly decreases her survivability for the remainder of the battle.

Once carrying one of the most formidable AA suites at her tier, Kremlin's AA has been hit with several nerfs, and while it is still on the stronger side at Tier 10, it is very easy to strip away without the Auxiliary Armaments Modification 1 (

) upgrade installed, so captains need to be wary when facing ships such as Thunderer and Yoshino, or other large caliber HE when a carrier is in play, especially as her horizontal protection is nothing special against AP bombs and even with her 60mm deck, US aircraft carriers will still be able to penetrate it and deal huge amounts of damage with their HE bombs.

Unfortunately, her weaknesses show in the form of her rather poor maneuverability, making requiring planning and good tactical positioning, as being caught broadside at close range could be very punishing.

To make matters worse, She lacks the ability to deal with destroyers in a manner similar to Grosser Kurfurst and Ohio, with an under-powered secondary battery of just 16 guns, compared to the 20 of Ohio's and the 24 of Kurfurst, although her good close range dispersion can allow her to get some good salvos off her main battery.

Though Kremlin seems to have much higher combat efficiency for closer ranges than her peer battleships, this makes her relatively less efficient in battles where long range engagements are more favorable, as somewhat commonly seen today. She is a relatively difficult to play ship, requiring much-needed planning and good understanding of tactical positioning.

Kremlin doesn't have any upgrades to research.

The recommended upgrades for Kremlin are as follows:

Kremlin can equip the following consumables:

Players must be mindful that although the Damage Control team is quick to act, it can handle a limited number of incidents before becoming exhausted.

Players who wish to spend doubloons can equip Kremlin with Type 20 camouflage that lowers her detection radius, reduces the accuracy of incoming shells, reduces her repair costs, and increases the amount of experience she earns.

Ships of U.S.S.R.
Battleships
Retrieved from "http://wiki.wargaming.net/en/index.php?title=Ship:Kreml&oldid=303442"
Categories:
Your location:
To log in, select the region where your account is registered
CIS Europe North America Asia Republic of Korea
Or use Microsoft Login to enter WoT XBOX ecosystem
Log in