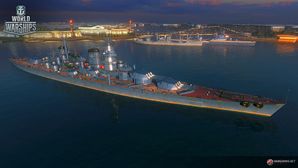 Kronshtadt was first released for sale worldwide on 30 May 2018 and was retired in early 2019.

Kronshtadt is a unique ship in World of Warships. Many of her characteristics are that of a battleship, while others are clearly those of a cruiser: her size, health, and potential damage of her guns are very much in line with the former, while her speed, armor, concealment and utility are those of the latter.

The largest mistake captains will make with Kronshtadt is the false assumption that they can play her as a battleship and get away with it. Her belt armor is fairly tough and her health pool is large, but her plating and size of her citadel prevent her from achieving the same role as a battleship. When fighting enemy battleships at close range, captains should angle in such a way to "bait" shots into her angled belt armor, and to not encourage the enemy to fire shots into her bow where overmatch of her 25mm plating can easily lead to citadel hits.

Kronshtadt’s main strength lies in her main battery: nine (9) 305mm rifles with fantastic shell speed, penetration, and damage. Her accuracy is not nearly as good as that of a traditional cruiser, but what she has is good enough to land large hits with her AP, and to accurately stack fires on enemy battleships at range. Although her guns allow a captain to get by with only firing AP, the best Kronshtadt captains will actively switch between the two types to maximize her effectiveness. Kronshtadt’s concealment is also quite good for a ship of her size, so captains are encouraged to make the most of it to lay ambushes and execute flanking maneuvers.

Like many cruisers, Kronshtadt sports a few utility consumables, most notably Surveillance Radar

and a choice between Defensive AA Fire

. Kronshtadt’s play style involves her playing at mid- to long-range for the majority of the match, so her radar will mostly become useful later in games.

Overall, Kronshtadt offers a unique and engaging play style that few other ships come close to offering. Captains who enjoy ships such as Scharnhorst, Amagi, or German heavy cruisers will find her to have a similar play style.

As a Premium ship, Kronshtadt doesn't have any upgrades to research.

Kronshtadt is a large cruiser that has gameplay similar to that of a fast, lightly armed battleship. As such, upgrades for improving maneuverability and survivability work well for her, as well as main battery upgrades.

The recommended upgrades for Kronshtadt are as follows:

in Slot 2 in order to extend her radar activation time to 24 seconds.

Kronshtadt can equip the following consumables:

As a premium ship, Kronshtadt comes with Default permanent camouflage and a set of permanent combat bonuses. 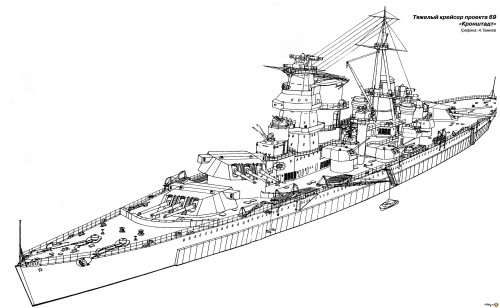 The requirement for a new Soviet heavy cruiser was addressed by two designs of the 1930s: Project 22 and Project 25. Project 22 was envisioned as a capital ship of over 20,000 tonnes, mounting 10-inch guns with the express goal of hunting down foreign "treaty cruisers". But a newly drafted naval alliance with the British forced the Soviet Navy to adhere to the limitations of the Second London Naval Treaty, so Project 22 was dropped in favor of Project 25: a “treaty battleship” of over 35,000 tonnes, designed to operate in the Black Sea. By 1937 the design was accepted and construction started, but the interference of the Great Purge found the lead designers removed from their position; Project 25 was summarily cancelled as it was deemed inadequate.

When the requirement re-surfaced again in the late 1930s, the work was revamped as Project 69: a large cruiser with a displacement of over 26,000, with an armor belt of 230mm, mounting the same 10-inch rifles, and planned speed of 34 knots. However, new foreign rivals soon emerged in the form of the German Scharnhorst class, the French Dunkerque class, and the modified Japanese Kongo class, which demanded a Soviet response. With the known specs of those ships at the time, the designers quickly realized the new Project needed to be bolstered in order to stay competitive; increasing displacement to 35,000 tonnes and decreasing speed to 31 knots in order to mount 12-inch rifles and add extra armor. With this, the sketch design was approved in 1939 and work on the detailed design began. Intensive armor testing during this period proved that armor-piercing bombs above 500kg could penetrate the thin deck armor, so the middle deck and lower deck were increased to 90mm and 30mm respectively. By 1940, the detailed designs were approved by the State Defense Council, although ship construction was already in progress due to preemptive planning by the design team.

Once again, the consequences of the Purge resurfaced. Putting aside the fact that the shipyards were ill equipped for such a daunting project — always under-manned and constantly strapped for resources — realistically it was impossible for the B-50 guns and MK-15 turrets to be complete in time to mount on these ships. So the design team proposed a highly unorthodox solution: purchase armaments from the Germans. In the spirit of the Molotov-Ribbentrop treaty, the Soviet government formalized an agreement to purchase 12 SKC/34 rifles and 6 Drh LC/34 from Krupp; equivalent main armament as the ones on the Bismarck class and the very weapons that were supposed to be refitted on to Scharnhorst and Gneisenau.

Ultimately, the two ships of the class — Kronshtadt and Sevastopol — would never be completed, due to the aforementioned limitations of Soviet heavy industries at the time, and the eventual commencement of the Great Patriotic War and the re-allocation of the necessary resources for other uses. After the Second World War, the Navy had no further use for them and both were scrapped by 1948.

Ships of U.S.S.R.
Cruisers
Retrieved from "http://wiki.wargaming.net/en/index.php?title=Ship:Kronshtadt&oldid=324645"
Categories:
Your location:
To log in, select the region where your account is registered
CIS Europe North America Asia
Or use Microsoft Login to enter WoT XBOX ecosystem
Log in