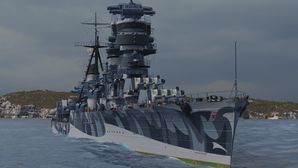 One of the light cruisers planned for construction under the "Big Ocean-Going Fleet" (Project 68). The ship's large dimensions allowed her to accommodate twelve 152mm main battery guns and provide quite strong armor protection.

Lazo is a Tier VII Soviet light cruiser that inherits its play style from its tech tree sister Shchors while being based upon the stock hull of Chapayev.

Captains will be happy with Lazo’s primary firepower which comes in the form of twelve 152mm rifles with a nine second reload and excellent range of 17.3km. The ballistics on these guns provide the opportunity to kite away and rain fire down upon enemy battleships with relative ease, making use of her unique Rapid Takeoff Spotter

consumable for near constant uptime. While the guns may lag behind Shchors for damage output due to the slightly lower rate of fire, the additional effective range helps to compensate. Her AP shells have relatively high armor penetration for the caliber, meaning they can be useful against cruisers that expose their broadsides; however, her high explosive shells will still be her primary ammo choice. Consequently, captains will want to invest in the Inertial Fuse for HE Shells commander skill to increase the penetration of her HE shells to 32mm.

of Lazo compliments the ship in its intended role of a long-range light cruiser by further increasing her range to 20.7km. A unique trait of this consumable is that compared to other cruisers, Lazo only has a 15 second cooldown before she can use her Spotting Aircraft again.

Lazo, like other Soviet cruisers, comes equipped a set of short range torpedoes that captains may wish to use in closer range brawls or to assassinate overly assertive battleships. These torpedoes should be considered a last-ditch weapon, though, as Lazo lacks the armor to reliably deliver them within range of an enemy battleship or heavy cruiser.

Captains will find Lazo’s maneuverability closely resembles that of Shchors, making her strong in the kiting role while the added armor affords her the chance to better sustain herself against incoming fire. The additional 4,100 hit points further increases her survivability, while she also benefits from a slight improvement in concealment. However, captains should be aware that while her armor is improved over Shchors, she is still very lightly armored and caution is advised should they opt to push into close range. Her anti-aircraft battery is a slight downgrade from Shchors, maintaining the same long-range and short-range firepower but reducing the damage output of her mid-range guns.

Overall, players who like Shchors and Chapayev will be right at home with Lazo, finding she plays in much the same way with only a few minor differences. She is best played at long range, making use of her exceptional gun ballistics and Rapid Takeoff Spotter

to get the best results while actively avoiding pushing aggressively until later in the game when she is less likely to be focused by multiple ships.

As a premium ship, Lazo has no module upgrades to research.

The recommended upgrades for Lazo are as follows:

Since Lazo plays similar to her tech tree counterparts, a standard build that emphasizes her survivability and main armaments is a viable options. Alternatively, captains may elect to use Spotting Aircraft Modification 1

to capitalize on the kiting play-style that favors Lazo.

Lazo is very similar to Shchors, and thus many of the same recommended skills will overlap between the two ships.

Lazo can equip the following consumables:

Captains should take note of the special nature of Lazo’s Rapid Takeoff Spotter. It has a very quick cooldown and uptime compared with other cruisers.

As a premium ship, Lazo comes with Default permanent camouflage and a set of permanent combat bonuses.

Two Aircraft and one catapult amidships 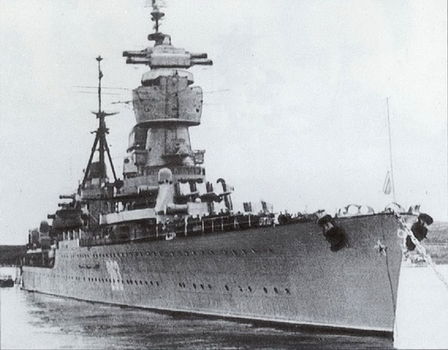 The Projekt 68, or Chapayev-class, was to be a class of light cruisers to accompany the new fleet of large battleships being planned by the VMF in the late 1930s, as well as to perform general defense of the homeland.

Initially, the design was based on the Kirov-class Projekt 26 light cruisers, which itself was essentially a copy of the hull of the Italian Montecuccoli-class light cruisers. The armament was changed to newer 152mm guns and the armor was improved compared to the Kirov-class, but the resulting design was considered insufficient. VMF leadership requested an increase in the power of the main battery with the addition of a fourth main battery turret, and the project was finally approved on 13 July 1939 as Projekt 68. Standard displacement had increased up to 10,620 tons with a 100mm main armor belt and 50mm armor deck.

However, due to the outbreak of the Second World War, and later the invasion of the Soviet Union in 1941, the construction of the cruisers was suspended. After the end of the war, it was decided to complete the five surviving hulls (of the seven laid down) to a revised Projekt 68K. The new design would incorporate lessons learned in the Second World War, namely in regards to increased resistance to underwater damage, with enhanced stability, operational range, and anti-aircraft firepower. Likewise, there would also be an effort to fit newer radars and radio communication devices. Standard displacement of the design increased to 11,330 metric tons as a result of changes.

Lazo is a representation of the original Projekt 68 design.

The hull was double-bottomed, and divided into 19 watertight zones. The main armor belt was 100mm thick, 3.3 meters tall and 133 meters long, and closed off by transverse bulkheads – 120mm thick forward, and 100mm thick aft, extending from the height of the main armored deck to the double bottom. The main armor deck was 50mm thick, with a short 20mm extension forward of the citadel. Main battery turrets had 175mm thick faces, 65mm sides and rear, and a 75mm thick roof. Barbette armor was 130mm thick. The ships were powered by six KV-68 boilers, which were licensed-built versions designed by Ansaldo, operating at a pressure of 26 atmospheres and a temperate of 350º C. These fed two TV-7 geared shaft turbines, each producing 55,000 shp for a total of 110,000 shp, which was sufficient for a top speed of 33.5 knots. Electrical power capacity was 1,700 kW and was in DC.

The ships also carried two triple 533mm torpedo tubes and could undertake minelaying tasks, carrying 90 mines. For reconnaissance and spotting corrections, two KOP 2 seaplanes were to be carried, launched via an amidships catapult.

Lazo was a member of the Chapayev-class (Projekt 68) light cruisers, most of which were laid down during the Second World War, but not completed until 1950. Lazo was planned to be the eleventh of fifteen sisters, to be ordered in the third Five-Year Plan and laid down in September 1941. She would have then commissioned in 1944 as part of the Pacific fleet (Tikhookeanski Flot). The place of construction would have been yard No. 199 at Komsomol'sk. However, due to the invasion of Soviet Russia by Nazi Germany, the ship was never ordered

Ships of U.S.S.R.
Cruisers
Retrieved from "http://wiki.wargaming.net/en/index.php?title=Ship:Lazo&oldid=321981"
Categories:
Your location:
To log in, select the region where your account is registered
CIS Europe North America Asia
Or use Microsoft Login to enter WoT XBOX ecosystem
Log in