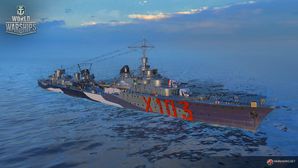 Le Terrible was first released for sale worldwide on 27 October 2018.

Le Terrible exemplifies the fast, gunboat style of destroyer play found in ships such as the Kiev and Khabarovsk. Having a large surface detection range, somewhat poor torpedoes, and no Smoke Generator

consumable, Le Terrible must rely on her guns and pure, blistering speed to have an impact in battle.

First and foremost, Le Terrible is currently the fastest tier VIII ship in the game, topping out at 53.8 knots with all pertinent boosts active. While her base top speed matches that of Khabarovsk, her improved Engine Boost

provides the edge need to claim the moniker of "fastest ship in the game". Le Terrible also has a meaty health pool to draw upon, facilitating her ability to draw and dodge most enemy fire through sheer speed and maneuverability. In addition, this health pool will help her to win destroyer duels, though her similarly large spotting radius functionally means that enemy destroyers will typically spot Le Terrible first in most situations. With her speed, however, it's unlikely that opposing destroyers will be able to escape upon being spotted. Le Terrible also has access to the Main Battery Reload Booster

consumable, doubling her rate of fire for fifteen seconds and letting her relatively high damage HE shells tear apart any enemy unlucky enough to be targeted.

It's not all peaches and cream, unfortunately. For all her speed, health, and bursty guns, Le Terrible sacrifices her smoke screen. Unlike other destroyers who might have an option to forgo smoke, it's simply not available on Le Terrible. Functionally, this forces her to rely entirely upon speed and health for disengagements while also ensuring any damage done by Le Terrible will be done in the open. Unless clever island play is used, Le Terrible will be spotted so long as her guns are firing (and assuming she hasn't drafted some other ship's smoke for her own use). Additionally, the firing arcs on Le Terrible’s third and fourth turrets are abysmally bad, forcing her to go nearly broadside to allow her entire main battery to enter action. While this isn't a huge issue when fighting at range, it becomes a critical weakness against other destroyers, as sailing side on during a knife-fight only causes her to take more damage. Admittedly, this weakness is somewhat mitigated by Le Terrible’s Main Battery Reload Booster

, but it's something captains should keep in mind nonetheless.

In short, Le Terrible is a speed demon in the most literal sense, sacrificing a key element of most destroyer play in order to more heavily specialize in speed and firepower. Those who enjoy living life on the edge will surely enjoy the experience afforded by this super-sonic destroyer.

As a premium ship, Le Terrible doesn't have any upgrades to research.

The recommended upgrades for Le Terrible are as follows:

for her unique Engine Boost

As a premium ship, Le Terrible comes included with Type 10 camouflage that lowers her detection radius, reduces the accuracy of incoming shells, reduces her repair costs, and increases the amount of experience she earns. 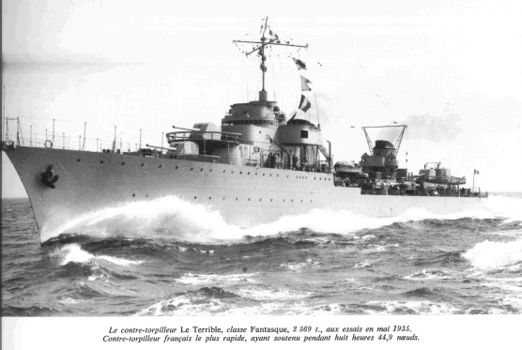 With the latest class of large destroyers (the Vauquelin class) being considered too small for the French needs, design work was done in an effort to create a faster and more powerful class of Destroyers. Given how the current designs with a displacement of 2,400 tons did not allow such improvements, it was decided to increase the displacement. The resulting ship displaced 2569 tons standard, 2800 tons under normal load and 3400 tons under a full load. The size increased to an overall length of 132.4m, a beam of 12.35m and a draft of 5m. Despite these enlargements, the complement in fact decreased to only 210, divided into 13 Officers and 197 men.

The main armament of the Le Fantasque class was improved over the previous classes. Whereas the Vauquelin class used a 138.6mm/40 gun, Le Fantasque carried a 138.6mm/50 gun. The longer barrel gave the shell a faster velocity and better range. The maximum gun range increased to 20km, an improvement of more than 3km. The theoretical rate of fire of 12 rounds per minute was only possible for a short time, because the 40kg heavy projectiles had to be loaded by hand. The practical rate of fire was noticeably lower at only seven rounds per minute. Five of these guns were mounted along the centerline: a superfiring pair at the bow and stern of the ship, with the last gun being mounted on the after superstructure facing forward.

Torpedo armament featured three triple launchers for the standard 550mm Torpedoes. These were not all mounted on the centerline, but rather saw two triple launchers between the smoke stacks — one on each side of the ship — with the third launcher being mounted further astern on the centerline, such that only two launchers could be trained onto a single target. The torpedo used was the 1923 Model DT, which carried a 415kg warhead filled with TNT, and had two settings for the speed: one allowing for a range of 14km at a speed of 35 knots, while the other reduced the range to 10km at 39 knots.

Initial anti-aircraft armament of these ships was typical of its time: four hand-loaded 37mm guns in two twin mounts, and an equal number of 13.2mm machine guns. Two depth charge racks with a total of 16 depth charges would be used to combat submarines, and it was possible to carry up to 50 mines.

The ships of the class that eventually escaped to the United States following the fall of Vichy France received a refit that improved the AA defenses: one quadruple 40mm Bofors — as well as two twin Bofors — replaced the 37mm guns, while ten single mounted 20mm Oerlikons provided an adequate short range defense. This, however, came at the cost of the centerline torpedo launcher aft, which had to be removed in order to maintain stability and to empty up the space required.

The most important aspect of the Le Fantasque-class, however, was undoubtedly her machinery. Four boilers and two sets of turbines produced a combined power of 81,400 shaft horsepower for a design speed of 37 knots, but during trials up to 101,800 shaft horsepower were achieved... along with the record speed of 45.03 knots. These happened under light loads in ideal test conditions, but under a full load a respectable speed of 37kn was still achievable. The engines were prone to machinery defects, thought, which showed themselves in the stripping of the turbine blades and boiler issues. The machinery also caused severe vibrations when used above certain levels of power, which negatively influenced the weapon and optical systems; during combat a speed of 28kn was deemed the maximum.

Laid down on 8 December 1931, launched on 30 November 1933, and commissioned into the Marine Nationale on 1 May 1936, Le Terrible joined the French navy alongside her sister-ship Le Fantasque. She did little more than trials in the pre-war period, being present in a review of the fleet on 30 May 1936, followed by another fleet review on 27 May 1937. When war was declared in 1939, Le Terrible — alongside several of her sister ships — were assigned to the Force de Raid based in Brest in Northern France. Le Terrible enjoyed her first triumph on 25 October 1939, where she captured the German cargo ship Santa Fe alongside Le Fantasque.

However, following the capitulation of France in mid-1940, the Marine Nationale was split between the Allied Free French forces and the Axis-aligned Vichy France, and Le Terrible found herself on the side of the Axis. Swiftly following the capitulation, Le Terrible was present in Algeria when the British fleet descended on a French fleet containing four French battleships in what became the Battle of Mers-el-Kébir. Le Terrible fought hard against her former allies, leaving the harbor to engage and torpedo the British fleet, but she was recalled to escort wounded Strasbourg to Toulon following the battle. Le Terrible survived her first serious fight. Her second engagement against the British happened at Dakar, where she successfully warded off a joint British-Free French naval force attempting to overthrow the pro-German French administration in Senegal. Le Terrible remained in Vichy French ports along the coast of Africa until Operation Torch.

After Operation Torch began, the fleet in French West Africa, including Le Terrible, returned to the Allies. In early 1943, she sailed to Boston alongside several other French ships, to undergo a major refit and modernization that equipped her with radar and a vastly improved anti-air suite. She was reclassified as a light cruiser, despite lacking the range of actual cruisers and possessing virtually no armor. Her first major operation on the Allied side was supporting Operation Baytown — the Allied invasion of the Italian mainland — in September 1943, bombarding shore targets and making good use of her powerful new AA suite.

By 1944, she was part of the 10th Light Cruiser Division alongside her similarly overhauled sister ships Le Fantasque and Le Malin, attacking Axis convoys in the Adriatic Sea (including the successful Battle off Ist). In mid-August 1944, Le Terrible provided gunnery and AA support in Operation Dragoon – the Allied invasion of southern France — where she fought to liberate her homeland. In December 1944, she collided with her sister Le Malin, knocking both ships out of action for the rest of the war.

After repairs were completed, she was put in reserve and re-classified as a “swift escort” to match NATO standards. Thanks to her high speed, she was used as an escort for foreign-built French aircraft carriers La Fayette, Bois Belleau, and Arromanches. In 1956, she began service as a training ship in Brest until she was finally decommissioned and scrapped in mid-1962.

Ships of France
Destroyers
Retrieved from "http://wiki.wargaming.net/en/index.php?title=Ship:Le_Terrible&oldid=316814"
Categories:
Your location:
To log in, select the region where your account is registered
CIS Europe North America Asia
Or use Microsoft Login to enter WoT XBOX ecosystem
Log in