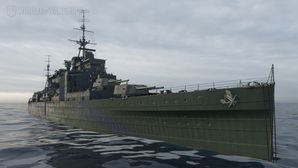 The lead ship in the second series of County-class cruisers—British "Washington Treaty" cruisers armed with eight powerful 203 mm guns. The cruiser was rebuilt during extensive modernization undertaken in the late 1930s, which changed the ship's exterior and reinforced her armor and AA batteries.

London is a Tier VI British heavy cruiser, that is taking the spot as a premium ship alongside Devonshire

On paper London offers an arsenal that is neither outstanding nor disappointing. Eight 203mm main guns offer a good broadside firepower, stronger than that of Aoba, yet not quite on the level of Pensacola. Her 15 second reload is the slowest of any cruiser at her tier save for the large guns of Admiral Graf Spee. Both shell types are usable, her HE shells having decent all around stats while her AP is effective against the lightly armored cruisers that are common in London's matchmaking spread. The biggest drawback of her main armament is the short range, making it difficult to apply her weaponry especially when facing Tier VIII ships. Eight torpedo launchers round off the armament, offering a painful sting at close range if required. Unfortunately, close range is all they are good for given the short range of 7km. Also while torpedo hits are painful, with only four per side they may not be enough to defeat a larger opponent.

London's armor scheme reflects that of many of her comrades. A large, thinly armored hull and a citadel that sticks up above the waterline. An advantage of the scheme is the absence of citadel space beneath the turrets, making only shots beneath her funnels capable of deleting London. Shells hitting beneath the turrets are highly likely to exit the hull on the other side, resulting only in over-penetrations. While advantageous against AP fire under limited circumstances, it makes London highly vulnerable against HE fire as even destroyer caliber fire will not struggle to land penetrating hits all around her hull.

An important tool in London's arsenal is her Smoke Generator

. It permits her to temporarily break vision, and if desired to fire a few rounds at targets in range. Be careful, though, as a heavy cruiser comes with a larger smoke firing concealment penalty than a light cruiser.

For her play style, London should aim at landing HE salvos on destroyers whenever possible. Her short range demands her to get close for this, but attempting long range combat is not possible given the short range. Use of Short-Range Hydro-Acoustic Search

will be important in these locations

As a premium ship, London doesn't have any modules to research.

The recommended upgrades for London are as follows:

In Slot 2 the Hydroacoustic Search Modification 1

As a premium ship, London comes with Type 10 camouflage that lowers her detection radius, reduces the accuracy of incoming shells, reduces her repair costs, and increases the amount of experience she earns.

HMS London, pennant number C69, was a member of the second group of the County-class heavy cruisers of the Royal Navy. She and her sisters; Sussex, Shropshire, and Devonshire differed from the earlier group of Counties (known as the Kent class) by having a smaller forward superstructure, which was positioned slightly further aft, and little armour plating. HMS London's career spanned over twenty years.

Ships of U.K.
Cruisers
Retrieved from "http://wiki.wargaming.net/en/index.php?title=Ship:London&oldid=317052"
Categories:
Your location:
To log in, select the region where your account is registered
CIS Europe North America Asia
Or use Microsoft Login to enter WoT XBOX ecosystem
Log in