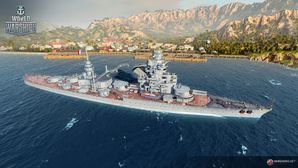 A battleship design created before the outbreak of World War I, representing an improvement on the previous Normandie class but carrying enhanced primary armament. The addition of the fourth main gun turret allowed the ship to deliver a unique, 16-gun broadside salvo.

Essentially Normandie with a fourth turret superfiring aft, Tier VII's Lyon stands out among ships with the joint largest (by shell count) main battery broadside in the game; a fact sure to please or frighten any captain, depending on which side of the salvo they are on. However, the accuracy of individual shells is still questionable, as is the AP penetration. Captains should be prepared to switch ammunition types depending on the situation.

Like her predecessors, Lyon does not have the most impressive armor, keeping largely the same armor scheme with only a few extra millimeters of thickness here and there. Her firing angles are still poor, and to make matters worse, her turret traverse time and firing range are worse than that of Normandie, though the latter is average among her tier VII peers. This makes it tricky to deploy her firepower without unacceptable risk; captains must wait for opponents to be distracted or reloading before turning to unmask all four turrets. The maneuverability at least is still very good, if not quite to the level of Normandie.

Her secondaries are an improvement over her predecessor's already potent array, to the point where even German counterpart Gneisenau would be jealous: 12 barrels on each side, with a solid fire rate and a massive 9% fire chance. Brawling with Lyon is not recommended, however, due to her lighter armor. Unlike Normandie, Lyon can claim a modern AA suite that is one of the best among her tier of battleships; it is several times more effective.

Availability of researchable upgrades for Lyon is as follows:

As with most battleships, Hull (B) is the best place to invest early experience gains in Lyon; the additional health is welcome, and the increase in her anti-aircraft suite is significant. The range upgrade is probably the next best pick-up, followed by the extra speed.

The recommended upgrades for Lyon are as follows:

Key skills for Lyon commanders include Priority Target, Expert Marksman, Superintendent, and Concealment Expert for the first 10 points. Other important skills to take include Adrenaline Rush as a general skill; High Alert, Jack of All Trades, Basics of Survivability, and Fire Prevention for a survival build; and Basic Firing Training, Advanced Firing Training, and Manual Fire Control for AA Armament for an anti-air build.

Lyon can equip the following consumables:

The Lyon class was a proposed type of battleship which was planned for the French Navy in 1913, with construction scheduled to begin in 1915. The class was to have comprised four ships: Lyon, Lille, Duquesne, and Tourville. The first two were named for cities in France, while the rest honored French admirals Abraham Duquesne and Anne Hilarion de Tourville. The design was an improvement on the previous Normandie class, and mounted a fourth quadruple gun turret, for a total of sixteen 340 mm (13 in) guns. Construction was cancelled due to the outbreak of World War I in August 1914 before any of the ships could be laid down.

Ships of France
Battleships
Retrieved from "http://wiki.wargaming.net/en/index.php?title=Ship:Lyon&oldid=319845"
Categories:
Your location:
To log in, select the region where your account is registered
CIS Europe North America Asia
Or use Microsoft Login to enter WoT XBOX ecosystem
Log in