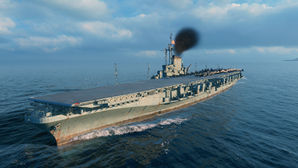 The lead ship of the class, USS Midway (CV41), is now preserved as a military museum ship in San Diego, California.

The pinnacle of the American aircraft carrier line, Midway is best suited for the flexible, fool-proof combat. Jack-of-all-Trades preset and parameters make her able to react to any threats quickly and counter them even if the original battle plan is falling apart.

While she has slightly fewer planes on deck compared to her Japanese counterpart Hakuryu, Midway's plane squadrons are smaller in size and have higher health per plane. These squadrons can withstand more anti-aircraft power due to their increased tankiness and can even plow through the thickest of AA to launch attacks.

There are two different types of attack aircraft to use, similar to Lexington. Players get the option between HVARs and Tiny Tims. HVARs have many rockets per run, however, HVARs have low fire chance individually and have low penetration, so these rockets are best used on soft targets. Tiny Tims are the hard hitters, with high penetration and high fire chance. These rockets launch fewer rockets per attack with a slightly lower minimum distance, so it is easier to miss small targets like destroyers with these rockets. Whichever option to take depends on the player's preference; players that prioritize eliminating destroyers should take HVARs, while players that focus on dealing large amounts of damage should take Tiny Tims.

The torpedo bombers deal moderate damage with each attack dropping six torpedoes, which can deal very high damage to slow moving targets. Thanks to the repair consumable they can manage to make two runs on enemy battleships which can critically damage them. The individual torpedoes are weaker than RN or IJN torpedoes and also aim significantly slower than them but the ability to land a high number of them somewhat compensates for this fact. Due to the torpedo bombers being slow to aim, players should start lining up their torpedo runs from a distance in order to minimize movement during the attack and to allow the torpedo bomber aim to narrow. They are a weapon that shouldn't be underestimated just because of her low damage per torpedo.

Midway's dive bombers are the stars of the show. Known for hitting targets hard from destroyers to aircraft carriers, the dive bombers can both do high amounts of alpha damage as well as set fires. They drop the same amount of bombs per attack as Lexington, but get one more attack per squadron as well as more plane health. Dropping near the end of an attack run can greatly increase the accuracy of the bomb drop, however, this technique is very high in difficulty. When mastered, the bomb runs can do five-digit damage per run even to destroyers. With the unique upgrade, their damage is boosted even further at the cost of speed.

Midway has a armored flight deck unlike earlier USN aircraft carriers which means she can tank damage from destroyers and cruisers for a while. She is really fast at 33 knots which means she can move to a different position when necessary. She is a very powerful aircraft carrier in the hands of a decent CV player and flexible with powerful planes although huge spotting range is often named as a disadvantage meaning that positioning is really important especially when the player doesn't do anything to lower her concealment. This all leads to a more forgiving gameplay compared to most other carriers, favoring brute force over stealth and allowing to follow allies for faster attacks and support.

Unlike most Tier X ships, Midway has upgrades to research, with one variable choice.

United States is researched off Midway at a cost of 1 XP.

The recommended upgrades for Midway are as follows:

Upgrade Slot 6 is the 2nd main choice of upgrades with Midway. Due to the slow speed of aircraft, it is recommended to choose Flight Control Modification 2

to attack more often and potentially to save more planes from destruction while returning to the carrier. If you are okay with their stock speed, take Air Groups Modification 2

Midway can equip the following consumables:

As with all other ships, Midway can mount eight signals at a time and has no risk of detonating. Players should mount Equal Speed Charlie London (for faster XP grinding / increased XP gain per battle), Zulu Hotel (when coupled with Equal Speed Charlie London greatly helps increase the speed of commander retraining), November Echo Setteseven (for better bomber self-defense against fighters and increased AA DPS), and Juliet Whiskey Unaone (to have a better chance at causing flooding and dealing damage via flooding). Players can also choose to equip the Dragon Flag for faster commander (re)training.

The Midway-class aircraft carrier was one of the longest-living carrier designs in history. First commissioned in late 1945, the lead ship of the class, USS Midway, would serve her country for nearly 50 years. During her early years, Midway served the Navy as a test bench vehicle. She tested cold-weather operations (FROSTBITE), fired a captured V-2 rocket (SANDY), and test-launched long-range nuclear bombers. She participated in tests of the angled deck design in the early 1950s. The British concept proved successful, and Midway was refitted accordingly in 1957 along with other modifications to allow her to carry heavier and more modern aircraft. In 1963, two test pilots successfully landed their aircraft via automatic "hands-off" approaches.

Midway saw extensive action during the Vietnam War, launching 11,900 sorties over a nine month period. From 1966 to 1970, Midway was reborn as an even larger and more powerful aircraft carrier, with a larger flight deck and reworked infrastructure. She returned to Vietnam, assisting with combat operations, rescue operations, and removal of American assets.

During the late 1970s and 1980s, Midway made her presence known in the Middle East and the Indian Ocean. In 1990, with decommissioning in sight, Midway participated in the Persian Gulf War (DESERT SHIELD/STORM). After the conflict, she participated in humanitarian missions in response to the eruption of Mt. Pinatubo. Finally decommissioned in 1992, USS Midway is currently a museum ship that can be visited in San Diego, California.

Ships of U.S.A.
Aircraft Carriers
Retrieved from "http://wiki.wargaming.net/en/index.php?title=Ship:Midway&oldid=321142"
Categories:
Your location:
To log in, select the region where your account is registered
CIS Europe North America Asia
Or use Microsoft Login to enter WoT XBOX ecosystem
Log in