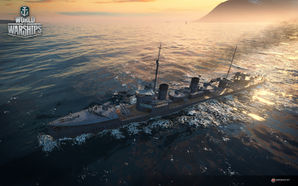 A ship that had a remarkable influence on the development of destroyers in the Imperial Japanese Navy. Owing to her powerful turbines, Minekaze could produce very high speeds that were superior to many of the destroyers built later.

Sometimes called "Ninjakaze" due to her ability to suddenly appear out of nowhere — an appearance that is frequently the harbinger of an incoming torpedo strike — Minekaze is a ship nearly 100% reliant on those torpedoes for damage.

She is arguably the weakest of the Japanese destroyers, with a low health pool, fragile modules, weak armor, and a very sub-par main battery. Her guns have an abysmal turn rate of 25 seconds for 180 degrees, and a very long reload time of 10 seconds. Though it is possible to do good damage with her high explosive shells, she will not be winning very many gun duels, especially not against the likes of Nicholas or Gnevny. Minekaze’s guns should not be forgotten, but they shouldn't be relied on as the main source of damage and are best used sparingly in specific situations.

Minekaze lives and dies by her torpedoes. They are her main weapon, capable of striking outside of her detection range. A skilled Minekaze player is able to sink enemy ships and never be spotted through the course of an entire match. Her three twin-tube launchers allow her to cover a lot of ocean with her torpedo spreads, and she reloads those tubes very quickly at 42 seconds each. Players looking to master the art of torpedoing enemies without being detected should start their training here; there is no better teacher than experience, and Minekaze’s torpedoes reload quickly enough to provide plenty of that.

With patience and practice, the approximately 1km gap between maximum torpedo range and detection range can be maximized to devastate entire groups of unaware battleships and cruisers. It also allows captains to stalk a solo battleship or carrier, then flex Minekaze’s speed to drive straight at them to deliver a full broadside of torpedoes at point blank range. She is best off avoiding other enemy destroyers completely and breaking unfavorable gunnery engagements quickly; the ability to launch fast moving torpedoes from stealth is Minekaze’s greatest asset, and a gunfight with anything that isn't another equal- or lower-tier Japanese destroyer is likely a losing battle.

Players should research Hull (B) first, as it provides a small increase to her health and maneuverability. Whether or not to research the remaining upgrades is up to the individual player, as Minekaze will not get a tremendous amount of use out of her guns and the experience may be better spent working up to Hatsuharu. 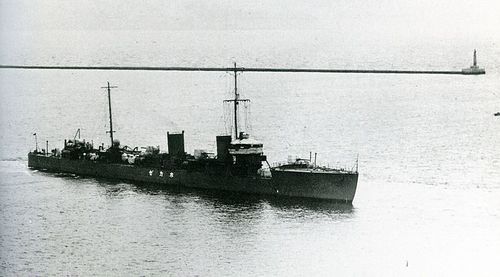 The Japanese destroyer Minekaze (峯風 Summit Wind?) was the lead ship of the Minekaze-class destroyers, built for the Imperial Japanese Navy (IJN) during the late 1910s. The ship served in the Second Sino-Japanese War during the 1930s and spent the Pacific War on escort duties in Japanese waters and the East China Sea. She was sunk by an American submarine in early 1944 near Formosa.

The design of the Minekaze class was approved during the last years of World War I, though none were completed before 1919. The first to be completed, Sawakaze, joined the navy in March 1920. The Minekaze class destroyers had typically uneventful interwar service records. By the beginning of war with China in 1937, they had become obsolete and were relegated to second line duties. By the time Japan had entered World War II, some had been converted for other purposes and most were used in merchant and convoy escort roles.

Akikaze would spend most of her wartime service engaged in ASW patrols and convoy escort duties. She would be damaged twice by air attack, once in August 1943, and again in December of that year. Torpedoed by submarine and sunk, November 1944.

Hakaze was engaged in escort and patrol duties for her entire war career. Torpedoed and sunk by submarine in January 1943.

Hokaze performed convoy escort and patrol duties for the entirety of her war service. She was damaged by submarine torpedo in June of 1943. Torpedoed and sunk by submarine, July 1944.

Minekaze would spend her entire war service engaged in ASW patrols and convoy escort duties. She was torpedoed and sunk by submarine in March 1944.

Nadakaze was re-rated as a PG in 1941. Rearmed with 120mm guns and having her torpedo armament reduced, she was later converted and again re-rated to APD. Torpedoed and sunk by submarine, July 1945.

Namikaze was assigned to convoy escort duties until she was severely damaged by submarine torpedo in September of 1944, when she was repaired and rebuilt as a Kaiten carrier. She survived the war and was awarded to China in 1947.

Nokaze served on ASW patrols and as a convoy escort for the entirety of her war career. She was torpedoed and sunk by submarine, February, 1944.

Numakaze performed convoy escort duties until she was torpedoed and sunk with all her crew lost in December 1943.

Okikaze had been disarmed and stricken from the navy list in preparation for disposal, but was rearmed , re-rated as a DD in 1941 at the beginning of World War II. She performed escort and patrol duties until January 1943, when she was torpedoed and sunk by submarine.

Sawakaze participated in ASW patrols and as a convoy escort until 1945, when she was converted for air and sea rescue. She was also fitted with an experimental ASW rocket launcher. Sawakaze survived the war and was scrapped in 1948.

Shimakaze re-rated and rearmed as a PG like Nadakaze, she was torpedoed and sunk by submarine in January 1943.

Shiokaze was engaged as a convoy escort for most of her war service. Damaged by air attack in January 1945, she was repaired and rebuilt as a Kaiten carrier and was fitted with radar. She survived the war and was later scrapped.

Tachikaze was, like her sisters, primarily engaged in ASW patrols and convoy escort. Damaged by air attack in December 1942 and again in April of 1943, she was sunk by air attack in February 1944.

Yakaze was converted into a wireless controlled target ship in May 1942. She was sunk in harbor during the air raids on the Home Islands in 1945. She was re-floated after the war and scrapped.

Yukaze spent the entire war as part of the naval air training group with Hosho. Like Sawakaze, she was converted to facilitate air-sea rescue. She survived the war and was awarded to Great Britain in 1947.

Ships of Japan
Destroyers
Retrieved from "http://wiki.wargaming.net/en/index.php?title=Ship:Minekaze&oldid=319135"
Categories:
Your location:
To log in, select the region where your account is registered
CIS Europe North America Asia
Or use Microsoft Login to enter WoT XBOX ecosystem
Log in