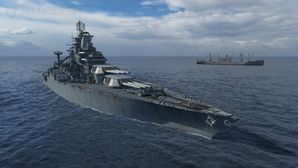 An interwar battleship design variant that underwent in-depth modernization in the 1940s, which significantly reinforced her torpedo protection and AA armament.

Retaining the slow speed of the rest of the line, Minnesota is a big upgrade over Kansas. While having the same turret layout and guns as Kansas, the Minnesota’s AP shells deal 1000 more damage as well as having a higher sigma, 1.9 on Minnesota compared to 1.7 on Kansas. Minnesota also has access to Artillery plotting room 2 for an extra -11% to the maximum dispersion of the main battery guns, making Minnesota a potent gun platform. Compared to her fast battleship counterpart Iowa, Minnesota’s shells do less damage per shell, however Minnesota's broadside alpha is higher due to the extra turret of 3 guns adding up to a 153,600 alpha shot compared to Iowa’s 121,500.

While Minnesota is covered in a 38mm plating, the ship sits high in the water and the superstructure is covered in 19mm plating, making it susceptible to smaller caliber fire. Minnesota does not perform well in close range engagements with its slow speed of 23 knots, long reload of 40 seconds and subpar armor, she performs better at medium range where small caliber fire is not as much of an issue. Staying at medium range will also help to hit ships behind islands as Minnesota has flatter shall arcs and does not have super heavy AP shells like the fast battleship line. Having a sense of situational awareness is needed for Minnesota, as its slow speed can impact reaction time to a surprising salvo fired at the ship.

Availability of researchable upgrades for Minnesota is as follows:

Skill points and upgrades should be invested to maximize Minnesota's survivability and concealment, as well as her main battery. There are several ways to improve the main battery.

The recommended upgrades for Minnesota are as follows:

Slot 2: Also for playing at range where the ship is often isolated, and for general air defense Defensive AA Fire Modification 1

is a good choice. The 48 sec. action time (and 55 sec. cooldown from the skills and flags) can cost the attacker dearly, perhaps allowing the delayed use of Sector Reinforcement until a second pass.

With the Swift in Silence skill active and the Sierra Mike signal flying, Minnesota's speed improves to 26.6 kts. Try it and surprise someone.

Minnesota can equip the following consumables:

Ships of U.S.A.
Battleships
Retrieved from "http://wiki.wargaming.net/en/index.php?title=Ship:Minnesota&oldid=318892"
Categories:
Your location:
To log in, select the region where your account is registered
CIS Europe North America Asia
Or use Microsoft Login to enter WoT XBOX ecosystem
Log in