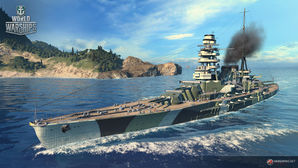 A Nagato-class battleship designed using experience gained in World War I to become one of the first "high-speed" battleships. The ship's armor protection was very good for her time. In addition to her primary armament, she also carried torpedo tubes.

Mutsu was released worldwide on 17 February 2017.

Mutsu is a Tier VI Japanese Battleship, sister ship to Tier VII's Nagato. However, Mutsu is a tier lower as she has her pre-refit hull, meaning she has weaker armor and slower-loading guns with World War I-era shells.

Featuring eight 410mm guns in a 4x2 configuration, Mutsu has the largest guns available at Tier VI — allowing her to overmatch the thinner plating of most ships at tier — partially making up for the deficiency in raw penetrating power her early shells have. However, these shells will still struggle against battleship belt armor at range, so captains will have to aim for the superstructure or use HE against them. Mutsu’s other standout characteristic is her torpedo tubes. She carries two single launchers per side, firing a 7km range torpedo that does 10,833 dmg and has a 21 second reload. However, these torpedo mounts are very fragile and have narrow firing arcs, meaning Mutsu must turn broadside in order to use them, greatly limiting their effectiveness. Mutsu’s other large disadvantage is that she has extremely lackluster anti-aircraft armament, so don't expect to shoot down many planes with her.

As a premium ship, Mutsu doesn't have any upgrades to research.

The recommended upgrades for Mutsu are as follows:

Slot 3 allows for further specialization. Generally, Aiming Systems Modification 1 is recommended because it reduces shell dispersion of the main and secondary armaments. Players wishing to specialize for secondaries should mount Secondary Battery Modification 1

As a premium ship, Mutsu comes with Default permanent camouflage and a set of permanent combat bonuses.

The three most important flags are India Delta (

); all of which will improve her survivability. For captains who prefer a Secondary Build, the addition of Mike Yankee Soxisix (

) will further improve the performance of Mutsu’s secondaries.

After experimentation with the six turret design of the Fuso and Ise classes, Hiraga and his designers decided to revert back to a quadruple turret design, determining this configuration to be the most effective. In order to not decrease overall firepower — by reducing the number of barrels from 12 to 8 — the caliber each rifle was increased from the traditional 14 inches to 16 inches; in fact, the Nagato-class battleships were the first ships in the world to mount 16-inch naval rifles. To supplement the primary artillery, twenty (20) 5.5-inch casemate guns were added to the hull. Interestingly, the Nagato-class retained the Japanese tradition of fitting torpedo tubes to their battleships. Historically, eight (8) total tubes were incorporated in the design; four (4) above the waterline and four (4) submerged (only the four above the waterline are available in-game).

Mutsu (陸奥, named after Mutsu Province) was the second of the two Nagato-class battleships, built at the Naval Arsenal in Yokosuka. She was laid down 1 June 1918, launched 31 May 1920, and completed 24 October 1921.

The Nagato-class underwent a modernization in the late 1920s and a reconstruction in the 1930s to keep the designs combat-capable. During the 1920s modernization, the first funnel was replaced with a serpentine funnel with a raked-top in order to attempt to fix the issue of the superstructure being occluded with smoke; the very funnel seen in-game. Furthermore, the torpedo tubes were traded-in for anti-aircraft artillery, in order to counter the growing threat of aircraft. Unique to Mutsu, her bow was remodeled in order to decrease water spray to her foredeck. The 1930s reconstruction proved to be a more extensive overhaul. The iconic 7-masted superstructure was replaced with a pagoda-mast style design, and the first funnel was removed altogether. The old boilers were replaced; the overall number was also reduced to just ten (10). Interestingly, the old turrets were replaced by the ones of the incomplete Tosa class battleships, allowing for greater gun elevation, ergo greater range. Furthermore, torpedo bulges were introduced. To mitigate the loss in ship speed due to the added weight, the length of the battleships were increased. Finally, a catapult was added to launch scout planes off the deck.

Commissioned in October 1921, Mutsu survived the Washington Naval Treaty, was assigned to BatDiv (Battleship Division) 1, and began an uneventful interwar career. From 1927 to 1933, Mutsu would receive periodic modifications, but in September 1934 she entered drydock for a complete rebuild and modernization. She remained in yard hands until September 1936.

With the beginning of war with China in July 1937, Mutsu — having returned to BatDiv 1 alongside Nagato — joined the fleet for security and blockade patrols off the China coast. Mutsu would continue operations off China until March 1941. In August 1941, Mutsu began preparations for combat as Japan planned for hostilities with the United States.

Mutsu would spend the beginning of World War II, from December 1941 to May 1942, in reserve and training. In June, she and the rest of BatDiv 1 — now including Yamato — sortied as part of the Main Body for Operation MO, the invasion of Midway. Other than to receive the transfer of survivors from Akagi, Kaga, Hiryu, and Soryu, Mutsu would not participate in the battle, and returned to Japan.

In July, BatDiv 1, less Yamato, was attached to the 2nd Fleet. In August, they departed for Truk after the US landing at Guadalcanal. In late August, Mutsu was assigned to support the Main Body for the Battle of the Eastern Solomons, where she fired at an aircraft shadowing the fleet. This would prove to be her only shots fired in combat during the war.

In September, Mutsu landed a party to help train anti-aircraft crews at Truk. She would remain and participate in exercises until January 1943, when she returned to Japan. Excepting one aborted sortie to the Aleutians after the Battle of the Komandorski Islands in late March 1943, Mutsu continued to conduct training and gunnery exercises until June 1943.

On 8 June 1943, Mutsu was moored in Hashirajima harbor when, at approximately 1200 hours, her No. 3 turret suffered an explosion. The blast tore her in two, and the section forward the No. 3 turret rolled over and quickly sank. Her stern section sank early the next day. Of her 1,474 crew, 1,121 were killed. An investigation concluded human error was responsible for the explosion, and the Japanese Navy consequently altered regulations for the handling of explosives aboard ships.

Mutsu was struck from the Navy List on 1 September 1943.

Post-war salvage attempts proved to be failures, though Mutsu’s No. 4 turret, anchors, and other parts of the ship — including her bow — were successfully recovered in the 1970s. The gun barrels from the salvaged No. 4 turret were restored and are now on display in separate locations in Japan: one at the Museum of Maritime Science in Tokyo, and the other outside the Yamato Museum in Kure.

Ships of Japan
Battleships
Retrieved from "http://wiki.wargaming.net/en/index.php?title=Ship:Mutsu&oldid=322899"
Categories:
Your location:
To log in, select the region where your account is registered
CIS Europe North America Asia
Or use Microsoft Login to enter WoT XBOX ecosystem
Log in