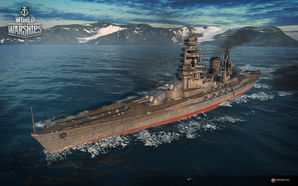 Nagato had long remained the most powerful warship in the Imperial Japanese Navy. She had good armor and carried 410mm main battery guns. In the 1930s, the ship was modernized to receive more powerful torpedo protection.

Nagato is the end stage for all the dreadnoughts of the Japanese battleship line. Her guns change from the 14-inch guns of Kongo and Fuso into 16.1-inch (410mm) guns she carries in four dual mount turrets, and her handling is quite impressive for a dreadnought, enabling her to be a functional firing platform and ship of the line.

The number of guns she carries is a drastic reduction from the broadside of Fuso, and their slower reload and narrower spread means that aiming properly is critical to success. However, these guns make her a serious threat to the heavily-armored American dreadnoughts that were tough nuts to crack with only 14-inch guns, and she can also easily maul higher tier battleships that are not too careful around her. She also has a very surprising quick-firing secondary battery with a respectable firing range; with a commander equipped with the Level 4 commander skill Manual Fire Control for Secondary Armament (which requires active targeting to use) that greatly reduces their dispersion, they can be lethal to destroyers that linger around her for too long. Her health pool is generous for a Tier VII battleship, and she can soak up a lot of punishment, though her torpedo protection is not that great. However her armor, while the strongest among mid-tier Japanese battleships, is still weaker than her Tier VII counterparts of other nations and her citadel is quite vulnerable; sailing into close-range duels, while they can be fun, is not advised.

Though her stock hull's anti-aircraft suite is nothing to write home about, upgrading to Hull (B) gives her a respectable AA suite and slightly enhanced armor protection. Even upgraded, though, Nagato’s AA is still weaker than many other battleships at her tier, meaning that enemy aircraft will likely focus their attentions on her. This, coupled with her sheer length (100 feet longer than Colorado) and substandard torpedo protection, makes Nagato an especially tempting target for torpedo bombers. When in a game with a higher-tier CV, Nagato captains are advised to group up with other ships with strong AA.

The key to doing well in Nagato is to rely on her accuracy to make smart target selections and fire for maximum effect. Fire at targets of opportunity from afar, but especially nail incautious battleships with her powerful guns. Avoid getting into close-range fights with other battleships unless you hold a significant HP advantage; she can absorb damage for a limited time only. Nagato can be a very rewarding battleship to have a three battleship division, with as she can provide long ranged fire support for the divisioning battleships.

The recommended upgrades for Nagato are as follows:

is recommended to provide additional survivability to the main battery, but players who desire to specialize in the secondary or anti-aircraft armament should choose Auxiliary Armaments Modification 1

is recommended because it reduces shell dispersion of the main and secondary armaments. To increase the effectiveness of the anti-aircraft armament, mount AA Guns Modification 1

Following the general battleship build, Nagato can go for a number of viable Level 1 skills, since none of them have a decisive advantage over the others. The Direction Center for Fighters skill sends up an additional catapult fighter when the consumable is used, and can bolster the ship's subpar defenses against carrier strikes. The catapult fighters on battleships are only active for 60 seconds, though, which limits their utility. While battleships aren't in much danger of losing modules, Preventative Maintenance reduces the chance of losing a main turret, and allows captains to equip Auxiliary Armaments Modification 1

For Level 2 skills, Expert Marksman is top priority for this tier, and should be acquired on all battleships. Following that, Adrenaline Rush can provide a significant boost to damage output as health evaporates in a match, to the point that Nagato can shave more than 5 seconds off her reload time in the last quarter of her health pool. Jack of All Trades provides a cooldown benefit to all consumables and Damage Control Party

consumable, and should be high on the list of skills to take. Otherwise, Basic Firing Training adds to the punch of Nagato’s secondaries and AA and should be taken for a secondary build. Vigilance can provide crucial seconds with which to evade torpedoes, but it does not replace careful attention to the minimap and heads-up play.

The last tier of skills offers a selection between Manual Control for Secondary Armament, Fire Prevention, Advanced Firing Training, and Concealment Expert. Manual Control for Secondary Armament and Advanced Firing Control are indispensable for secondary battery oriented builds, and provide the accuracy and range needed for them to work well. Fire Prevention increases Nagato’s survivability, but keep in mind that the small reduction in fire chance may not be worth the amount of skill points it costs. Finally, Concealment Expert afforts Nagato a small tactical boost in allowing her to withdraw when it gets too hot, though the decrease in detection radius is not so large, and this skill generally is of little benefit unless the commander in question is to be moved to higher tier battleships.

Nagato can equip the following consumables:

The three most important flags are India Delta (

); all of which will improve her survivability. For captains who prefer a Secondary Build, the addition of Mike Yankee Soxisix (

) will further improve the performance of Nagato’s secondaries. 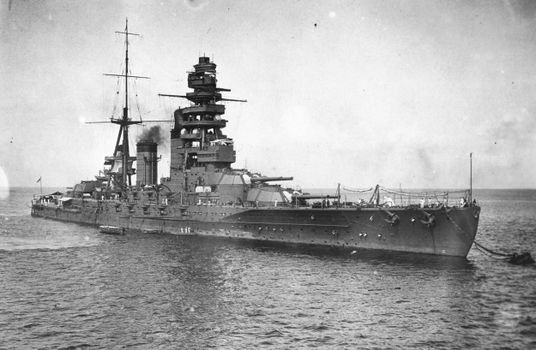 After experimentation with the six turret design of the Fuso and Ise classes, Hiraga and his designers decided to revert back to a quadruple turret design, determining this configuration to be the most effective. In order to not decrease overall firepower — by reducing the number of barrels from 12 to 8 — the caliber each rifle was increased from the traditional 14 inches to 16 inches; in fact, the Nagato-class battleships were the first ships in the world to mount 16-inch naval rifles. To supplement the primary artillery, twenty (20) 5.5-inch casemate guns were added to the hull. Interestingly, the Nagato-class retained the Japanese tradition of fitting torpedo tubes to their battleships. Historically, eight (8) total tubes were incorporated in the design; 4 above the waterline and 4 submerged. (The four tubes above the waterline are available in-game on Mutsu, none of Nagato’s hulls come with torpedoes mounted.)

The Nagato-class underwent a modernization in the late 1920s and a reconstruction in the 1930s to keep the designs combat-capable. During the 1920s modernization, the first funnel was replaced with a serpentine funnel with a raked-top in order to attempt to fix the issue of the superstructure being occluded with smoke; the very funnel seen in-game. Furthermore, the torpedo tubes were traded-in for anti-aircraft artillery, in order to counter the growing threat of aircraft. The 1930s reconstruction proved to be a more extensive overhaul. The iconic 7-masted superstructure was replaced with a pagoda-mast style design, and the first funnel was removed altogether. The old boilers were replaced; the overall number was also reduced to just ten (10). Interestingly, the old turrets were replaced by the ones of the incomplete Tosa class battleships, allowing for greater gun elevation, ergo greater range. Furthermore, torpedo bulges were introduced. To mitigate the loss in ship speed due to the added weight, the length of the battleships was increased. Finally, a catapult was added to launch scout planes off the deck.

Ships of Japan
Battleships
Retrieved from "http://wiki.wargaming.net/en/index.php?title=Ship:Nagato&oldid=318980"
Categories:
Your location:
To log in, select the region where your account is registered
CIS Europe North America Asia
Or use Microsoft Login to enter WoT XBOX ecosystem
Log in