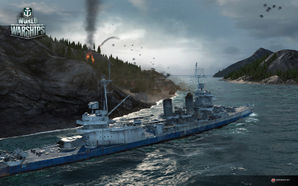 The first U.S. heavy cruiser of the new generation. The key difference from the preceding cruisers was her remarkably reinforced armor. Taking into account her limited displacement, the ship boasted a successful balance of armament, protection and speed.

New Orleans is basically a melding of Pensacola, Northampton, and Portland — currently represented by Tier VII Premium cruiser Indianapolis — and shows herself as a new shift in US heavy cruisers. A stocky ship, it should come as to no surprise that her armor is a vast improvement from Pensacola (not hard to do), allowing her to at least handle herself in cruiser duels. Her AA suite is also somewhat better, though it is not until Tier VIII's Baltimore that American heavy cruiser anti-aircraft defenses become truly fearsome.

She has the same excellent gun performance as the Pensacola. When fully specialized for concealment she has a 10.6 km detection radius by sea. Despite this, pushing in at the beginning of a battle is an extremely hazardous proposition as her armor is still inadequate protection against battleships, especially considering her mediocre health pool. She must use islands and concealment to contribute in the early game without taking too much fire. The later stages of the game can offer more opportunities to be aggressive, whether it is hunting down enemy destroyers or ambushing enemy cruisers.

Availability of researchable upgrades for New Orleans is as follows:

Captains should grab Hull (B) first for the added health, then move on to the range upgrade.

The recommended upgrades for New Orleans are as follows:

for Slot 3 to increase her medium- and long-range AA power. The usefulness of this build is dependent on whether there is a carrier in the game. The presence of an enemy carrier generally can be ensured by forming a division with a friendly carrier.

Players who wish to spend doubloons can equip New Orleans with Type 17 camouflage that lowers her detection radius, reduces the accuracy of incoming shells, reduces her repair costs, and increases the amount of experience she earns.

As the lead ship of her class, which was to be the last series of ships designed to abide by the Washington Naval Treaty, the USS New Orleans (CA-32) was among the first cruisers to be built with enough armour to stop 8in shells. Due to the time in which she was designed, the class name was considered unofficially as either the Minneapolis-class or more affectionately as Astoria-class. However, after the loss of Astoria, along with Quincy and Vincennes, in 1942 at the Battle of Savo Island, New Orleans became the official class name for the cruisers.

Twenty-three cruisers were originally planned under a 1929 programme by the US Navy, but the due to the 1930 London Naval Treaty and already owning several 8-inch cruisers, they only produced seven of the New Orleans-class ships. However, this class had three distinct test designs, with the New Orleans, Astoria, and Minneapolis all belonging to one. As a result from these test designs, the class spawned the Baltimore, Brooklyn, Cleveland, and Wichita class cruisers. The final four New Orleans-class ships were scrapped 1959-1961.

Ships of U.S.A.
Cruisers
Retrieved from "http://wiki.wargaming.net/en/index.php?title=Ship:New_Orleans&oldid=316072"
Categories:
Your location:
To log in, select the region where your account is registered
CIS Europe North America Asia Republic of Korea
Or use Microsoft Login to enter WoT XBOX ecosystem
Log in