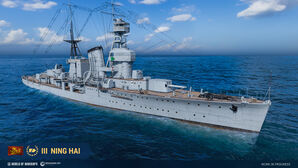 A small light cruiser built in Japan for the Republic of China Navy. The ship had a moderate speed but carried relatively powerful artillery for her size.

Tier III premium cruiser Ning Hai enters the Pan Asian tech tree as the first low tier cruiser (besides Tier I Chengan) of the tree. Built by Japan for the Republic of China Navy, she was based on the real-life experimental cruiser Yūbari, featuring large guns for her displacement. In-game, she bears more similarities with her low tier Japanese cruiser counterparts than her Pan-Asian tech tree successors.

Ning Hai carries large guns for her small size, with strong performance in many aspects. She mounts six 140mm guns in three twin turrets, the same guns and turrets carried by Tier IV Yūbari. Her guns reload in 8 seconds and her turrets can traverse 180° in 24 seconds, both average for her tier.

Although two of her three turrets are located on the stern, her small superstructure gives her excellent firing angles to both the front and rear. Her guns have a range of 13.7km, the longest of any Tier III cruiser and even longer than many Tier IV cruisers. Combined with flat shell arcs and fast flight times, she can effectively engage a target anywhere within her impressive range.

Both her HE and AP shells are identical to those carried by Tier III Japanese cruisers Tenryū and Katori, and Tier IV Yūbari. Her HE shells deal up to 2400 damage with a 10% fire chance, the highest damage and second highest fire chance in her tier. Her AP shells deal up to 2700 damage, and have reasonable armor penetration thanks to their larger caliber. Although her AP is best used against broadside cruisers, it can still be effective against battleship superstructure and upper belts at close and medium range. Despite her high shell damage and fire chance, her 8 second reload limits her sustained DPM and the number of fires she can set per minute.

Ning Hai also carries two twin 533mm torpedo launchers, one per side. Her launchers are the same as on Katori and Tenryū, but she uses Kuma’s higher damage torpedoes. They all have the same 7km range, 42 second reload, and 57 knot speed. But Ning Hai's deal more damage per torpedo, 10,833 vs. 9,067 on her Tier III counterparts. They have a high flood chance, but also have a high detection range and longer reaction time of 7.8 seconds. Her firing angles aren’t as bad as Tenryū, but she still has to show a lot of side to launch. With only two torpedoes per side she can cripple or kill an enemy cruiser, but will only manage to anger a healthy battleship.

As a Tier III cruiser, Ning Hai only has access to a single consumable — Damage Control Party. She uses the same standard version carried by almost all cruisers, with a 5 second action time, 60 second cooldown, and unlimited uses.

Ning Hai features both outstanding agility and terrible maneuverability. Her speed is on the level of standard battleships, but her agility is at the top of her class.

With a top speed of only 21.3 knots, she is one of the slowest ships in her tier and matchmaking range. Cruisers and destroyers can easily outpace her, and even many battleships can reach the same or higher speed. She must plan her movements in advance, as she will often find herself lagging behind allied ships. Both during a push as well as during a retreat.

On the other hand, she is one of the most agile ships in her tier. Her 3.6 second rudder shift is faster than any other Tier II to IV cruiser, and her 390m turning circle is better than all but a couple Tier II cruisers.

Ning Hai is a small ship, and severely lacking survivability. With only 13,800 HP, she is the squishiest cruiser in her battle, and barely has more health than the largest Tier III and IV destroyers. Like most other low tier cruisers, she also lacks any real armor protection. Her 6mm bow and stern provide absolutely no protection against any HE shell, and only the smallest destroyer-caliber AP can’t overmatch it. She has thin strips of 76mm armor extending under her turrets that can bounce the occasional AP shell when angled, but most of her side and deck are the same 6mm. She has a 19mm central deck that can shatter most destroyer HE and bounce cruiser AP, but it’s mostly covered by her 6mm superstructure that is easily damaged.

Her citadel is particularly vulnerable, extending almost all the way up her side and extending along the waterline under her turrets. The central section is only protected by 25mm of armor, while the waterline sections are behind her 76mm strips. The 25mm section can bounce all AP when sufficiently angled, but she will take large amounts of damage when caught broadside. She also has a large stepped citadel that ranges from 19 to 25mm thick, so any AP that overmatches her bow or stern can easily reach her citadel.

Ning Hai does feature a torpedo belt, one of only a couple low tier cruisers to have one. The 4% reduction offers little protection in practice, but it makes torpedoes slightly less of a threat than for most Tier III cruisers.

Although her small size results in a very low health pool, it still has its benefits. She is more difficult for enemies to hit, especially if she is actively dodging. And her thin plating and narrow hull mean larger caliber AP is likely to overpenetrate and deal minimal damage as long as it misses her citadel. It also helps with her concealment. Her 8.9km maximum surface concealment is slightly better than average, but her 3km air detection is excellent for a cruiser. Enemy aircraft will struggle to spot her and keep her detected, and her primary surface detection threat are stealthy destroyers.

Ning Hai has almost no protection against aircraft. She has no long-range mounts, and produces no flak. Her mid- and short-range mounts have average range, 3 and 1.5km respectively, but both deal very little damage.

Like most Tier III cruisers, Ning Hai must rely on allied ships for air protection, or hope the planes go somewhere else and leave her alone.

Like many other low tier cruisers, Ning Hai can really only do one thing — deal damage. She can’t tank damage, she can’t offer AA cover, and she can’t lead a charge. Her main battery and torpedoes are highly effective for a Tier III cruiser, and her comfortable ballistics and long range allow her to stay in the fight while still keeping enough distance to dodge return fire. And although her torpedoes have limited firing angles, their fast speed, high damage, and quick reload mean they’re still a potent threat to cruisers or injured battleships. As she can’t fire from stealth, they’re best used for ambushes around chokepoints.

Due to her poor speed, players must plan their movements in advance. Her main battery range is long enough that she can lend fire support even if she trails behind her flank, but she can easily get left behind if her flank retreats. Players should stay at mid range whenever possible, using her small size and good firing angles to her advantage. She must know where her battleship threats are, and try to present as small a target as possible so their shells miss or hopefully bounce off her citadel belt. Focus on shooting enemy cruisers and destroyers, and use her good fire chance to help burn down enemy battleships.

As a premium ship, Ning Hai has no module upgrades to research.

Like most low tier cruisers, Ning Hai has few options outside dealing damage. As such, players should select skills and upgrades that increase her damage potential wherever possible. Both her main battery and torpedoes are usable, so players can choose to focus on one or the other, or build into both.

|Skilled Commanders Dà Róng and Quán Róng can be a good fit for Ning Hai and should be used if available. Due to her low base HP, their improved Survivability Expert skill can be very useful to give her as much health as possible. Their improved Demolition Expert skill is also useful for players that build into her main battery.

The following build is intended for players that wish to have a dedicated captain for Ning Hai. Players intending to use her as a captain trainer for a tech tree ship should consult the build recommendation on that ship's page.

As a premium ship, Ning Hai comes with Default permanent camouflage and a set of permanent combat bonuses.

Two float planes (deployed and retrieved via crane, no catapults) 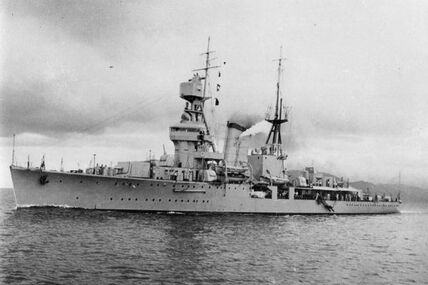 In the 1920s, the Republic of China Navy (ROCN) consisted of a couple 19th century protected cruisers and two training cruisers received before World War I, and was both antiquated and underequipped. Ambitious re-armament plans were made but initially lacked funds, and after negotiations with shipbuilders in the United States, United Kingdom, Germany, and Japan, an order was placed for one light cruiser to be built in Japan with a sister ship built in China with Japanese assistance.

Ning Hai was based on the experimental Japanese cruiser Yūbari, with Yūbari’s large 140mm guns but an even smaller displacement. In addition to her guns and torpedoes, she had a small hangar space for two seaplanes (Japanese Aichi AB-3 biplanes), one of which would be brought from Japan. There were no plans for aircraft catapults on the ship; instead, the planes would be deployed and retrieved with a crane. As a result of her outdated engines, she was underpowered and only capable of a 22 knot top speed. Like many other Japanese-designed ships of the era, she was top-heavy and would be unstable in open water. As a result, she was relegated to coastal operations against mostly smaller vessels.

Ning Hai was laid down at the Harima Shipyards in Japan on 20 February 1931, and commissioned on 1 September 1932 as the ROCN flagship (serving until her sister ship Ping Hai replaced her in 1937). She returned to Japan several times during her service with the ROCN for repairs and for the funeral of Japanese Fleet Admiral Tōgō Heihachirō in June 1934.

During the Second Sino-Japanese War, she was a priority target of the Imperial Japanese Navy as one of the more powerful ships in the ROCN fleet. During the attack on Kiangyin Fortress on 23 September 1937, she was hit by four Japanese bombs (her sister ship Ping Hai was hit with eight and sank). She managed to escape, but was hit by torpedo bombers from Kaga two days later and sank.

The Japanese captured the sunken ship in December, and attempted unsuccessfully to refloat her in April 1938. A second attempt in May was successful, and she was towed to Shanghai for repairs. Originally planned to be a flagship for the Japanese puppet state in the Republic of China, she was later re-classified as a training vessel and coastal defense ship (named Mikura) but ended up service as a floating barracks until December 1943.

Mikura then returned to Harima Shipyards, where she was converted into an escort ship to protect Japanese maritime traffic against Allied submarines. She was recommissioned as Ioshima in June 1944, and escorted a convoy of transports to Iwo Jima in late July where she managed to avoid a torpedo attack from an unknown submarine. On 10 September she left for a second escort mission, but was hit by three torpedoes fired from USS Shad (SS-235) and sank on 19 September. She was stricken on 10 November.

Ships of Pan-Asia
Cruisers
Retrieved from "http://wiki.wargaming.net/en/index.php?title=Ship:Ning_Hai&oldid=325896"
Categories:
Your location:
To log in, select the region where your account is registered
CIS Europe North America Asia
Or use Microsoft Login to enter WoT XBOX ecosystem
Log in