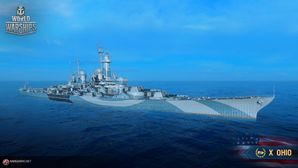 Ohio would seem similar to Montana, as both share the same hull. However, there are key differences.

Ohio's main battery consists of 8x 457 mm guns, as opposed to Montana's 12x 406 mm guns. While this may seem like an inferior main battery at first glance due to having a smaller salvo weight, Ohio's main battery brings quite a few advantages with it. Ohio's reload time is significantly shorter than that of most Tier X BBs, which partially offsets her low salvo weight. The large caliber means her AP can overmatch 30 mm plating found on most Tier X cruisers' midsections, which allows Ohio to be an exceptionally effective cruiser killer. Moreover, her AP has very good penetration, and the main battery's accuracy is impressive - Ohio shares her dispersion pattern and sigma value with Warspite, known for her exceptionally reliable main battery. The subpar ballistics performance can be a double-edged sword - on one hand, leading shots at medium and long range may be trickier than with other BBs, but on the other hand her shells have a steeper impact angle, making the AP arm more often due to it impacting more effective armor, especially when overmatching cruiser plating and BB superstructures. Her HE shells aren't worth mentioning outside of marginal situations, when there are no better targets to shoot than stubbornly angled BBs. And if this wasn't already good enough, her main battery can be further enhanced by a choice of Main Battery Modification 3

At first glance Ohio's survivability should be no different to Montana's with nearly the same HP pool and armor layout. The key difference is her Repair Party consumable. Montana's variant heals 0.66% total HP/sec; Ohio's variant heals only 0.5% HP/sec (same as most other BBs). However, Ohio's Repair Party cools down in an astonishing 40 seconds, roughly half that of Montana. This makes Ohio extremely resilient to concentrated fire, thus making her adept at both standard tanking as well as tanking when pushing. Her effective survivability rivals the likes of Großer Kurfürst and Kremlin. In addition, her citadel is moderately well protected against BB fire due to it sitting low in the water, and her 38 mm midsection hull plating is decently resilient to HE and SAP fire.

The secondary battery shares much in common with those found on Georgia and Massachusetts — it has good range and very good accuracy, making a secondary build a viable option. In fact, the potent secondary armament and the rapid Repair Party cooldown makes Ohio a potent close range BB, on par with Großer Kurfürst.

Her AA armament is quite formidable for a Tier X BB, but it still won't prevent enemy CVs from getting a strike off on a lone Ohio, even though it may contribute to long-term plane losses.

With regards to her maneuverability, it is worth mentioning that she boasts a significantly faster rudder shift time than Montana with a lower top speed, but is otherwise unimpressive by Tier X BB standards.

Her concealment is also pretty average among Tier X BBs, unless one decided to forego the Concealment Expert skill in favor of building into the ship's secondary armament.

Ohio is best played in a manner similar to Montana. Most of the time, her captain will want to sit around medium range, tank damage, and provide fire support with her main guns. However, when a push from either side happens, Ohio can exploit it very well, either by overwhelming enemies with the combination of her main battery power, her secondary battery's contribution, and her almost unparalleled durability, or effectively stalling a push with the help of the above mentioned characteristics. But unlike with, for example, Großer Kurfürst, one has to be extra wary of enemy destroyers sending torps her way, as Ohio doesn't get access to the Hydroacoustic Search

With regards to competitive potential, Ohio is among the strongest BB picks as long as the given competitive format doesn't include aircraft carriers.

As a premium ship, Ohio doesn't have any upgrades to research.

Ohio can benefit from a standard "tank" build that most battleships benefit from, but a better way to build her is to take advantage of her secondary armament in some way. There are two ways to achieve this, depending on whether her captain likes having more emphasis on survival or her secondary battery.

Your first skills should be Priority Target, Adrenaline Rush and Superintendent in both variations. If you want a survivability-focused build, you should spec into Concealment Expert, Fire Prevention and Advanced Firing Training skills, in this particular order. If you're feeling like you're not squeezing enough value out of your secondary armament, proceed with Fire Prevention, Advanced Firing Training and Manual Fire Control for Secondary Armament skills. The last remaining point should go to Preventive Maintenance, considering you will want to pick the Auxiliary Armaments Modification 1

upgrade in slot 1 in order for your secondaries to be effective for as long as possible.

The recommended upgrades for Ohio are as follows:

As a Tier X premium ship, Ohio comes included with Type 20 camouflage that lowers her detection radius, reduces the accuracy of incoming shells, reduces her repair costs, and increases the amount of experience she earns.

The Ohio is the second Montana-class battleship that has been rearmed by Wargaming. She swaps the triple 406mm/50 turrets of her older sister for twin 457mm/48 turrets in addition to swapping some quad 40mm Bofors mounts with the more modern dual 76.2mm mount.

The USS Ohio (BB-68) was to be the second Montana-class battleship and would've been the fourth ship to carry the name Ohio. She was to be laid down at Philadelphia Navy Yard, but the re-allocation of wartime assets to carrier construction after the Battle of Midway lead to the Montana-class being suspended in June 1942 before being entirely cancelled in July 1943.

In the early 1920s the USN began developing 457mm/48 gun for future use on American battleships. However, after the Washington Naval Limitation Treaty of 1922 outlawed guns larger than 406mm, it was shelved and development instead turned to the 406mm gun. In the late 30s, during the initial design phase for what would eventually become the Iowa and Montana-class, the gun was again considered for use. However, tests showed that the AP projectile only had a marginal armor penetration improvement over the 406mm shell in addition to ships being limited to only six to eight guns due to the larger turrets. This, as well as America still abiding by the Washington Naval Treaty, lead to the gun being rejected early on in favor of the 406mm/50.

Ships of U.S.A.
Battleships
Retrieved from "http://wiki.wargaming.net/en/index.php?title=Ship:Ohio&oldid=316839"
Categories:
Your location:
To log in, select the region where your account is registered
CIS Europe North America Asia
Or use Microsoft Login to enter WoT XBOX ecosystem
Log in