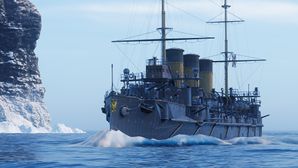 This very successful Bogatyr-class protected cruiser was intended for combat operations as part of a squadron and long-range reconnaissance duties. She boasted powerful artillery, and a decent speed and armor for her time.

Oleg is a Tier III premium Russian cruiser. She shares many traits with her tech tree counterpart Bogatyr, given that they are the same class. Her 152mm guns — and their arrangement — are identical to Bogatyr, along with her speed and mobility, making her playstyle very similar and in line with the other Tier III cruisers.

As a premium ship, Oleg doesn't have any upgrades to research.

The recommended upgrades for Oleg are as follows:

Oleg can equip the following consumables:

As a premium ship, Oleg comes included with Type 9 camouflage that lowers her detection radius, reduces the accuracy of incoming shells, and increases the amount of experience she earns. 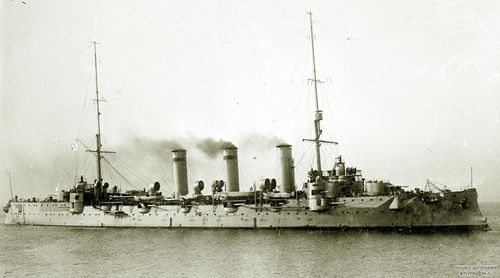 In 1898, the Imperial Russian Navy sent out a request to acquire new protected cruisers for its Pacific Fleet. Of all the competing designs, the Russian Naval Ministry found the project offered by the German company, Vulkan, to be the best. By 1899, the plans for the protected cruiser were purchased and distributed to the various shipyards in charge of constructing the 4 cruisers of the Bogatyr-class.

Bogatyr-class ships were of the three-funnel, two-mast design (fore and main), with small, but pronounced poop and forecastle at the edges of the deck. The enclosed two-gun turrets were found on the elevated decks; providing better clearance and a greater arc-of-fire. The rest of the main artillery was placed in single-mounts with a blast shield along the broadsides of the main deck and in casemates along the main and aft superstructure. Armament of choice were the venerable 152mm Canet guns, Bogatyr-class having the largest salvo of any Russian cruiser at the time, with 12 guns.

Russian engineers successfully modified the planned power plant and managed to increase the top-speed to 24 knots; very fast for its time. As well, upon her completion, the class could boast to have the thickest armor of any protected cruisers in the Navy, with an armor deck that sloped to the sides and ends; thickest sections being 70mm.

Oleg (Russian: Олег) was the fourth and final ship of the Bogatyr-class, being laid down at the Admiralty Shipyards on 6 July 1902, being launched 14 August 1903.

Oleg was commissioned into the Baltic Fleet on 24 June 1904, by which point the Russo-Japanese War was well underway. She set sail for the Pacific in the famed Second Pacific Squadron, the very one that engaged Admiral Togo’s Combined Fleet in the Battle of Tsushima. Oleg was damaged, but managed to survive the battle along with cruisers Zhemchug and Aurora, fleeing to neutral Manila where she was interned for the rest of the War.

Oleg returned to the Baltic Fleet in 1908 and underwent two modifications in her career: her secondary armaments and torpedo nets were removed in 1908, and in 1916 she was rearmed with 130mm guns and gear for mine-laying operations.

During the First World War, Oleg was part of the First Cruiser Brigade of the Baltic Fleet, mainly seeing mine-laying duties. The few surface engagements to note would be the 1915 Battle of Åland Island, where the German light cruiser SMS Albatross was beached and participating in the German Convoy raids of 1916 near Gotland, Sweden.

The crew of Oleg readily declared their support for the Bolsheviks when the 1917 October Revolution commenced. At the time docked in Helsinki, she underwent the famous “Ice Voyage” back to Krondstadt through icy waters in order to avoid the fate of being interned by independent Finland. Now part of the Soviet Active Squadron, she served till the evening of 17 June 1919, when she was torpedoed and sunk by the Royal Navy motor torpedo boat CMB-4 during a port raid in Krondstadt.

Ships of U.S.S.R.
Cruisers
Retrieved from "http://wiki.wargaming.net/en/index.php?title=Ship:Oleg&oldid=313034"
Categories:
Your location:
To log in, select the region where your account is registered
CIS Europe North America Asia Republic of Korea
Or use Microsoft Login to enter WoT XBOX ecosystem
Log in