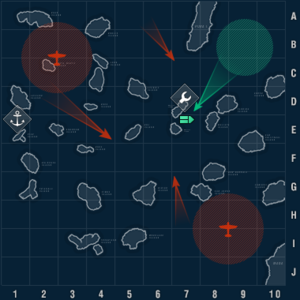 Players must reach and defend the aircraft carrier Raptor.

Operation Raptor Rescue is a PVE Scenario which has the friendly task force defend the Raptor, a Ranger-class aircraft carrier. Players are initially tasked with escorting support ships to Raptor. Once repairs are completed, players must escort Raptor and the support ships out of the combat zone. Players may take only Tier VI ships. The allied force consists of 7 player ships, 3 support ships, and Raptor.

Upon spawning, there will immediately be a group of enemies to the west. After destroying these enemy ships, players need to make their way to the Ranger-class aircraft carrier, Raptor. Once Engineer has caught up to Raptor, it will begin repairs. Stay close to the group and prepare for the next assault, which will come from the south. After repelling this wave, Engineer will likely have completed repairing Raptor. As Raptor begins moving, a third and final assault wave will steam in from the northwest corner of the map. This attack wave will approach Raptor rapidly, so be careful not to stray too far. Escort Raptor to safety to complete the operation.

Engineer will repair ships within the repair circle. This is very useful for ships that do not have the Repair Party consumable.

An aircraft carrier, preferably Ryujo, will be a substantial asset. Battleships like Fuso are somewhat useful. Cruisers that have smoke, like Leander, or a fast rate of fire, like Cleveland, are well suited to this mission. Destroyers can help by providing smoke for Raptor (Farragut) or torpedoing enemies (Fubuki).

Retrieved from "http://wiki.wargaming.net/en/index.php?title=Ship:Operation_Raptor_Rescue&oldid=253913"
Category:
Your location:
To log in, select the region where your account is registered
CIS Europe North America Asia Republic of Korea
Or use Microsoft Login to enter WoT XBOX ecosystem
Log in