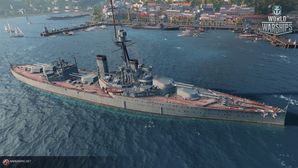 The first dreadnought ship in the world to carry 343 mm main guns; she was superior to all battleships built before her in terms of firepower. Besides this, in contrast to her British predecessors, the ship had reinforced side armor and a more advanced arrangement of artillery guns.

HMS Orion is the Tier IV British battleship. Like other Tier IV battleships, Orion is fitted with large guns and thick armor at the cost of speed. Orion’s belt armor will not withstand broadside salvos, but it is sufficient at protecting the ship’s citadel when angled properly.

Orion is fitted with ten 343mm guns mounted in five turrets along her centerline; this turret arrangement allows all main battery guns to be fired simultaneously. The glacially slow turret traverse speed requires captains to plan ahead and begin rotating the weapons before entering an engagement. Additionally, Orion’s armor piercing shells will sometimes struggle to deal damage against other battleships. Captains should not be afraid to load high explosive shells in these situations. The high damage and fire chance on the HE shells makes them quite effective at damaging targets that the AP shells would normally not harm.

Orion also carries an impressive secondary armament for her tier. These small caliber guns can help fend off smaller targets who sail too close to the ship, but should not be the only defense against destroyers. Captains should prioritize any ship trying to come within range for a torpedo strike. Orion’s low torpedo damage reduction and hit point pool make her quite vulnerable to torpedoes.

Orion has three modules for captains to research: upgrades to her hull, propulsion, and gun fire control system. Captains should first research the upgraded hull for the increased health and maneuverability it provides, then invest experience gains in the gun fire control system upgrade for the extended main battery range before finally researching the propulsion upgrade.

The recommended upgrades for Orion are as follows:

Orion can equip the following consumables:

Orion can mount up to eight signal flags simultaneously. Captains looking to improve the ship’s survivability should mount India Delta (

) can also improve survivability by reducing the cool down timers on the repair party and damage control party consumables. Sierra Mike (

) is also recommended to increase the ship’s top speed. 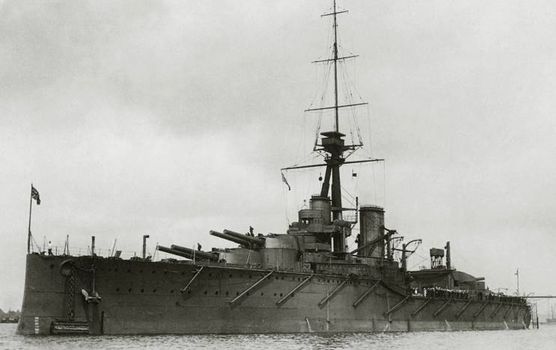 HMS Orion at anchor at an unknown location, date likely before 1915.

Through public demand, four more battleships and a Battlecruisers were added to the 1909/1910 Naval construction programme. The first new Battleship was authorised in April, followed by 3 more in August, these battleships would eventually form the four members of the Orion-class.

The Orion-class are often said to be the first 'super-dreadnoughts', as they are a large improvement over previous Dreadnoughts, in terms of size, armament and armour. Compared to the preceding class of Battleships in the Royal Navy, the Colossus-class, the belt armour was increased from a maximum of 279mm (11") to 305mm (12"), the forward bulkheads were thickened by an inch to 203mm and 152mm, while the aft bulkhead was increased by 2-inches to 254mm (10"). Deck armour was also more extensive, though still only reaching 102mm at a maximum due to the short ranges of engagement expected in combat. The side armour now reached to the upper deck as well, protecting more areas of the ship.

Before the previous Colossus-class design had been finalised, the decision to use a new 343mm (13.5") gun on the next class of battleships had been taken. This new gun fired a longer and heavier shell than the previous 305mm (12") guns, although it's propellant charge was lighter. The change was also made to improve the stability of the shell in flight, by keeping the muzzle velocity relatively low. This gun was known as the '12"/50 A' during development to conceal it's true calibre and improvement over previous guns. Indeed, the new battleship was seen as such an improvement that the preliminary design that became the Orion-class, 'Design L' was designated as secret before the design was finalised. The Orion-class were the first Dreadnought Battleships of the Royal Navy to have all main armament turrets placed on the centreline, allowing all ten guns on the ship to fire to each broadside, although this meant the ship was longer and displaced more than previous designs with wing turrets. Furthermore, the conning tower and main gun fire control centres were further away from the blast from the guns. The 343mm/45 Mk.V (Light shell) guns were arranged in five twin turrets in an 'A-B-Q-X-Y' layout, 2 turrets fore and aft, and an amidships turret. Additionally, three underwater 533mm torpedo tubes were carried, and sixteen 102mm (4") secondary guns were mounted, eight in the fore superstructure, and eight aft of Q-turret.

The extra armour and larger guns had made the Orion-class displace 22,250 tons standard as designed, an almost 2,000 ton difference over the Colossus-class. Although one preliminary design had a top speed of 23 knots and a standard displacement 24,250 tons, the smaller 22,250 ton design with a maximum speed of 21 knots was chosen. This 21 knot speed was achieved through 27,000 shp, provided by 2 parsons geared steam turbines, which used steam from 18 boilers. Orion, Conqueror and Thunderer used Babcock & Wilcox Boilers, while Monarch had Yarrow boilers installed instead.

Orion was laid down in November 1909, while her three sisters; Monarch, Conqueror and Thunderer followed in April 1910. Throughout their service lives, the ships were little modified, however some changes were made. The compass platform was extended over the conning tower early on, and during World War 1, the topmasts were lowered, additional armour fitted over the magazines, torpedo nets removed, and a 76mm anti aircraft gun fitted. Conqueror also received a 102mm anti aircraft gun in addition. In 1917, flying off platforms were also added to the roofs of certain turrets. At some point late in the war, three 102mm guns were removed from the aft superstructure on Conqueror at least, allowing the operation of kite balloons. A problem that persisted was the smoke and hot gasses from the fore funnel making the spotting top uncomfortable and sometimes uninhabitable at times, as the main tripod mast was positioned behind the fore funnel, instead of ahead of it.

Being the name ship of her class, HMS Orion's keel was laid down first on 28th November 1909. Construction on her hull lasted until her launch on 20th August 1910, after which she spent the next one and a half years being fitted out and tested until 2nd January 1912. Upon completion, she joined the 2nd Division (later 2nd Battle Squadron) of the Home Fleet. Although spending most of her early years under repair or in exercises, Orion with her sisters almost had a chance to engage in combat when the German light cruiser SMS Stralsund was spotted, part of the force that bombarded British seaside towns earlier, but fire was withheld seeking orders from a senior commander. Until the Battle of Jutland, Orion and her sisters took part in exercises and supported the raid on Tondern Zeppelin base. In 1915, it was decided that Orion would be fitted with a fire director for her 102mm secondary guns, though this didn't happen until 1918. Also in 1915, Orion received a main battery fire director, which showed improved shell dispersion patterns.

During the legendary Battle of Jutland during the night from 31th May to 1st July 1916, HMS Orion participated as the flagship of the 2nd Battle Squadron, as the fifth ship in the Grand Fleet's line of battle. When first engaging the German fleet, Orion fired four salvos at the German König-class Battleship SMS Markgraf scoring one direct hit which destroyed a Secondary gun, and one close hit which most likely damaged one of Markgraf's screws. When she later engaged the German Battlecruiser Lützow and the destroyer SMS G38 together with HMS Monarch, a total of five hits were scored on the German vessel, and it's unclear which ship scored which hit.

After Jutland, the normal patrols and exercises resumed, and after a brief stint in the 3rd Battle Squadron, Orion was transferred to the reserve fleet in November 1919. She became a gunnery training ship in June 1921, but on 12th April 1922 HMS Orion was sold to be scrapped in accordance with the Washington Naval Treaty, and in February next year she arrived in Queenborough, Kent, where she was scrapped.

Orion's sisters career's mirrored that of Orion. All four ships were assigned to the 2nd Battle Squadron, and operated as a unit throughout the war, including at Jutland. None of the ships were damaged, and all four were assigned to the reserve fleet after the war. They were disposed of in the 1920s after the Washington Naval Treaty. All earned a single battle honour for the Battle of Jutland.

HMS Monarch was completed in April 1912, and at Jutland as the sixth ship in line, scored a hit on the battleship SMS König, and also engaged SMS Lützow, scoring hits and causing severe damage, including disabling two main guns, cutting power to the aft turret and flooding. In 1920-1921, Monarch was used to transfer troops to the Mediterranean and back. Between 1923 and 1925, Monarch was hulked and used as a target ship, and on 21st January 1915, was sunk after 9 hours of bombardment from Royal Navy ships, including Hood, Repulse and Revenge.

HMS Conqueror was completed in November 1912, and in December 1914 accidentally rammed Monarch, requiring 3 months repair. She was the seventh ship in line at Jutland, and first fired at unidentified German Battleships, before switching to the crippled light cruiser SMS Wiesbaden although the number of hits, if any, are unknown. After firing upon German Destroyers, she didn't fire again in the battle. Conqueror relieved Orion as flagship of the reserve fleet in 1921, but was also sold for scrap in 1922, and arrived at Upnor, Kent in January 1923 for breaking up.

HMS Thunderer was completed in June 1912, and in December of that year, took part in a shoot out with Orion to prove the effectiveness of the gunnery director that had been fitted to Thunderer, which proved successful. At the Battle of Jutland, Thunderer was the eighth ship from the head of the line, and fired upon Wiesbaden as well as unidentified Battleships. In 1920, Thunderer was also used as a troop ferry, but in 1921, was converted to a training ship and had half of her 102mm secondary guns. In 1926, Thunderer was the last of the class to be retired, and was sold for scrap in Blyth, Northumberland later that year, although she had to be lightened significantly twice in Rosyth, Scotland before finally entering Blyth in April 1927.

Ships of U.K.
Battleships
Retrieved from "http://wiki.wargaming.net/en/index.php?title=Ship:Orion&oldid=319626"
Categories:
Your location:
To log in, select the region where your account is registered
CIS Europe North America Asia
Or use Microsoft Login to enter WoT XBOX ecosystem
Log in