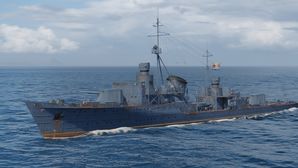 A patrol ship with very powerful artillery. Orlan was intended to operate in island waters. She boasted a very high level of maneuverability owing to her small dimensions and decent speed.

The recommended upgrades for Orlan are as follows:

Orlan can equip the following consumables:

Orlan (Орлан, "Sea Eagle") is based off the Project 37 destroyer, an attempt by Russian designers to create a cheap multi-role warship that could be built in the Volga shipyards without inferring with the main shipyards. After completion, their small size would've enabled their transport to the Northern and Baltic fleet by way of inland waterways. They were originally designed to be equipped with a sonar station and depth charges for anti submarine duties, a 533mm triple torpedo tube for engaging larger ships, and 100mm guns. Four designs, differing only in armament, were drawn up in 1941 and shown to the General Staff of the Navy in July of 1942. He rejected them for being too large and ordered a revision. A revised design was finished in 1943 and featured an increase in gun caliber to 130mm and a decrease in torpedo size to 450mm. This design was also rejected and all work on the ship was stopped in 1945.

Orlan seems to be an amalgamation of the gun arrangement of the 4th 1941 design, and the gun caliber of the revised 1943 design. The triple torpedo tube present in both designs was likely deleted in the name of game balance. She was given the name "Orlan" by Wargaming in accordance with the Soviet tradition to name patrol vessels after animals.

Ships of U.S.S.R.
Cruisers
Retrieved from "http://wiki.wargaming.net/en/index.php?title=Ship:Orlan&oldid=315808"
Categories:
Your location:
To log in, select the region where your account is registered
CIS Europe North America Asia Republic of Korea
Or use Microsoft Login to enter WoT XBOX ecosystem
Log in